A recapitalization is a form of restructuring the ratio of various forms of capital generating modes such as debt, equity, and preference shares depending upon WACC and other requirements of the company such as the desired level of control and so on. In this process, the company issues one form of capital to buy back another form; for example, issuing debt to buy back existing shares to benefit from a favorable interest rate environment.

There are various types as below:

Around 2013, Dell went private. One of the main reasons for this was that Michael Dell wanted to grow faster and therefore needed greater control over strategic decisions without having to gain approval from several other stakeholders and the Board of Directors.

Further, going private would reduce the filling requirements of SEC, reducing the time and costs of paperwork. To undergo this change, Dell had to take a bank loan, and the costs saved from reduced paperwork and dividend payments would go to paying off the debt quickly in comparison to what it would have been able to thus it would be able to reduce the debt burden too. Also, it would bring greater flexibility to invest in R&D because it doesn’t need to payout enough dividends and can retain them; this may lead to faster growth.

However, in Dell’s history, this is not the only case of recapitalization; in 2018, i.e., 5 years later, Dell sought to go public again through a VMware stock swap deal, an alternative to the traditional IPO process. The motivation here was the growing ties with VMware and the expected growth in the market of the new product lines it had to offer. 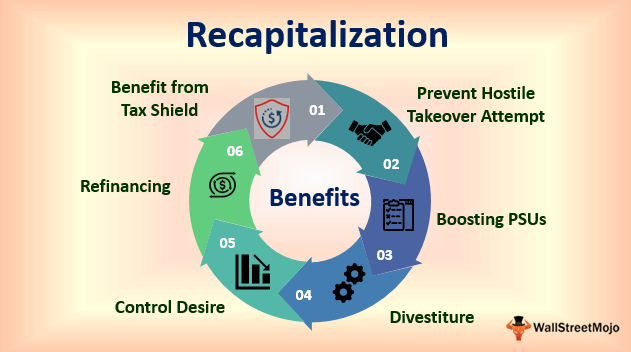 Interest on debt is tax-deductible, therefore increasing debt in the capital structure leads to an increase in the interest burden and, in turn, lower taxes. This could only be a motivation when:

Opposite to the previous motivation, when a company wants to reduce its interest burden, it goes for an Equity recapitalization because it may not want to part with some of its profits or incur losses in paying the interest, which is an obligation and independent of companies earning a profit. Even if the company earns a profit, it has the option of retaining it if it has growth opportunities to invest in. Therefore under such circumstances, it has the freedom that it doesn’t payout any dividends

There are several takeover defense mechanisms which can lead to a recapitalization. The stock repurchase is when the target company buys back its shares from the market to reduce its availability for an acquiring company to buy such shares. In Greenmail, the target company buys back the shared held by the acquiring company, and if it extinguishes these shares, then the capital structure gets affected. In white squire defense, it buys back the shares of the minority and allots them to friendly partners.

Also, there may be a situation in which the target goes for a rights issue at a highly discounted price to increase the number of shares and make it difficult for the acquirer to acquire. In order to take any of these defenses, the target company may even issue debt or other forms of capital, leading to a recapitalization, and otherwise also these result in a change in the capital structure in their own way.

When the government takes the nationalization route, it is mainly to help certain sick PSUs to overcome their deteriorating balance sheets. At times when banks have very high levels of non-performing assets, the government infuses capital so that these banks don’t go bankrupt. At other times, when the economy is slowing, the government uses the capital infusion to boost lending activity by the bank. All these lead to an increase in the government’s stake in the PSUs, which is a form of recapitalization.

The opposite of Nationalization is Divestiture, in which the government sells its stake to private parties with the motivation of reducing the government’s expenditure or losses or making such PSUs more efficient through privatization.

At times companies or management require greater control over the company, and for this reason, they may reduce the debt because debt-holders impose restrictive covenants on the risks that can be taken by the company or on the fresh capital issues.

At times when the interest rates become more favorable, companies may issue new debt just to recall old debt issued at a higher interest rate; this helps in reducing its WACC

There are several costs associated with being a publicly listed company related to disclosures and regulatory requirements. Such is not the case in private companies, and therefore at times, the companies may go private to reduce such costs when they become unbearable.

In real estate development, several parties come together, landowners, development partners, investors, and so on. However, each of these participants has different investment horizons and expectations regarding the market and returns, therefore at times, those having a longer time horizon and hopeful expectations recapitalize the stake of other participants for mutual benefit.

Recapitalization is used as an exit route in Private equity where the private owners sell a portion of their companies to take advantage of growth opportunities that require greater capital or reduce their stake or burden and yet retain some stake to benefit from future growth prospective.

Recapitalization is the process of altering the capital structure that would better suit the needs of the company, and the motivation behind it may vary from one company to another. It may lead to the desired result or may not and should be thought out decision.

It is a common process, and there are several real-life examples of capitalization as most companies require this tool at some point in their life cycle, and from time to time, the motivation to do so may be tied to a different objective.

This has been a guide to what is Recapitalization and its meaning. Here we discuss types and examples of recapitalization along with its benefits. You can learn more from the following articles –