What are Contingent Shares?

Let’s look at the proposed merger details of Harmony Merger Corp with NextDecade LLC. One of the merger details is that Harmony will issue NextDecade shareholders approximately 97.87 million shares of Harmony common stock at closing, with up to 19.57 million additional contingent shares issued to NextDecade upon achievement of certain milestones. 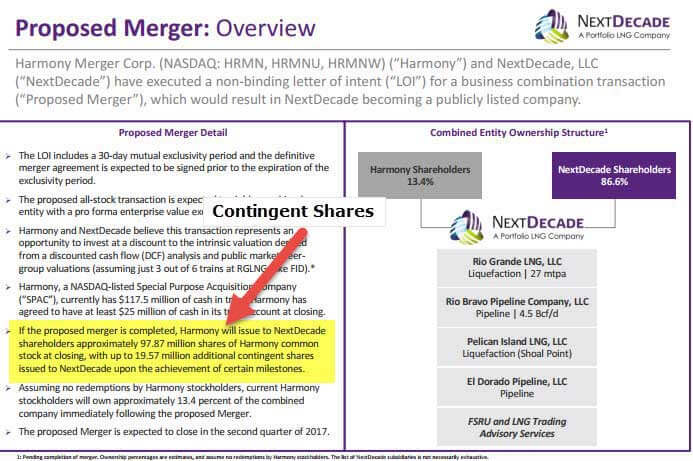 How to Interpret Contingent Shares?

But why this sort of settlement/agreement is required? Let us take the previous example to expand upon our explanation.

While negotiating, both parties find that their terms are not in unison. And no amount of further negotiation can settle the dissonance. At this stage, both of these parties decide to come under an “if-then” terms of how one party will treat another.

Now let’s come back to Company A & Company B. Let’s say that they have signed a contingent issuance agreement. As per the agreement, if Company B earns a certain amount, Company A will benefit the shareholders of Company B by issuing a set number of common shares. These shares are called contingent shares.

also, have a look at Complete Guide on Preferred Shares

Let’s take a practical example to illustrate contingent shares. It will help us understand how the whole thing happens.

Company A acquired Company B. During the negotiation, Company A agreed to issue 20,000 common shares to the shareholders of Company B, if Company B increased its earnings by 20% in the current fiscal year. The current earning of Company B is $200,000. And the current number of shares outstanding is 200,000.

Now, let’s say that Company B can hit the target of a 20% increase in its earning this year. That means Company A will issue 20,000 common shares as contingent shares.

Effect of Issuance of Contingent Shares

As a result of issuing such shares, there is one significant effect on the earnings per share (EPS) of the company.

And to calculate the new earnings per share, we will use the new number of outstanding shares. As a result, we get a new EPS, which is more than the previous EPS (that may be different on different occasions).

Do you remember that we talked about contingent shares issuance agreement while explaining the concept of contingent shares? Now, let’s understand this before we go on to the other related concepts.

Contingent shares issuance agreement would be signed in the case of merger and acquisition. In merger/acquisition, the acquirer company promises to issue new common shares for the acquired company if certain conditions are attained.

Both of these parties must agree to these two factors. And that will result in the additional issuance of shares if the condition/s is met.

Below is a contingent share issuance arrangement excerpt from RealResource Residential LLC. Here there two types of issuances – 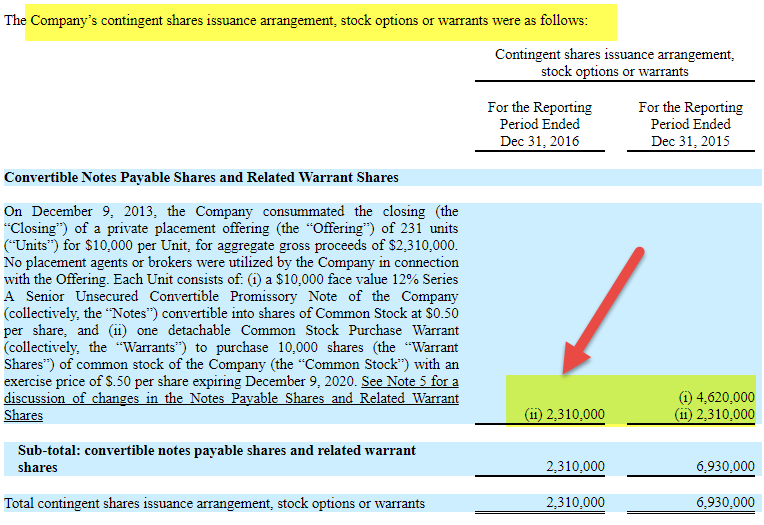 Now let us at an example, where the pre-defined conditions were not met, and the contingent shares were not delivered.

Below is an excerpt from India Globalization Capital Inc.  They completed the acquisition of 51% of the outstanding share capital of Golden Gate Electronics in May 2014. The terms of the agreement also included 1,004,094 shares as contingent on the electronics business meeting annual thresholds for revenue and profit through the fiscal year ending March 31, 2017

. In this case, the contingent issuable shares were not delivered because the acquired company was unable to meet the targets.

The impact of contingent shares on EPS (diluted EPS)

Now the question is when we should include contingent shares as outstanding in diluted EPS.

As from the formula above, contingent shares would be added to the number of outstanding shares, which will be resulting in a diluted EPS.

Please note that Contingent issuable shares are used only when the conditions are met.

We take an example to illustrate this.

Let’s say that Company X went to merge with Company Y in the year 2015. The terms of the merger were set like this –

The question is, in this situation, how Diluted EPS would be calculated? And when the contingent shares would be added to the outstanding shares of Company X?

Let’s try to understand this situation from the beginning.

The term was that if Company Y exceeds $80 per share as the market price of the common share during the year 2015 or currently, then Company X will issue 50,000 additional shares in the year 2016.

Was the condition met in 2014? The answer is YES. We should include conditional issuable shares whenever the goal is met.

I hope this has added value. Good luck!