What is Cost-Push Inflation?

Cost-push inflation is the form of inflation that is caused as a result of substantial increment in the cost of the factors of production like raw materials, labor, factory rent, etc and the same cannot be altered as this literally has no appropriate alternative and this ultimately leads to a decrease in the supply of these inputs.

Three of the major causes for the increase in costs that generate cost-push inflation are the following: 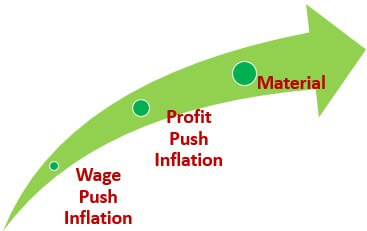 One of the causes of cost-push inflation is when the increase in the wages of labour is more than the increase in their productivity at work. Since the labourers have to be paid more, the producers increase the price of finished goods to pass on the hike in production cost that eventually results in inflation. This type of inflation is usually seen when there is a strong labor union.

Let us take the example of a company wherein the workers are producing 100 units annually and their wages are fixed at $20 per hour. Now, let us assume that the labor union has demanded a hike in the wage by 25% and consequently the company has increased the wage to $25 per hour. However, the production output has increased from 100 units to 110 units annually. As such, there is a difference between the rise in production output (10%) and a rise in wages (25%) which is known as wage-push inflation.

The causes of cost-push inflation are when entrepreneurs or producers increase the prices of goods and services more than the popular expectation in order to garner a higher profit margin that again leads to inflationary conditions.

Let us take an example where the senior management of a company has decided to increase the price of its product from $200 to $230 although there is no corresponding increase in the price of inputs and wages. It can be seen that there is a 15% rise in profit leading to inflation and as such this type of inflation is known as profit-push inflation.

Another major cause of cost-push inflation is when there is an increase in the prices of some key materials (such as steel, energy, oil, etc.) which are used, either directly or indirectly, in almost the entire economy. Consequently, an increase in the prices of such material significantly influences the cost structure of all industries and eventually the economy ends up in the clutches of inflation.

The supply shock created by the Organization of the Petroleum Exporting Countries (OPEC) four decades ago is a classic example of material cost-push inflation. The organization intended to decrease the global oil supply by raising the prices that resulted in a sharp increase in inflation that eventually led to a supply shock.

Besides, some other causes of inflation can be natural disasters and government regulations. A good example of inflation caused by the natural disaster is Hurricane Katrina that created havoc in the US in the year 2005 as the storm destroyed oil refineries that led to soaring of gas prices. On the other hand, an example of inflation due to government regulation is a tax on cigarettes and alcohol which leads to the increased price of these products and hence inflation.

It is important to understand that inflation per se is not such a bad thing. However, the inflation caused by cost-push inflation is somewhat the wrong kind of inflation. Cost-push inflation is characterized by rising prices and falling real GDP. The fall in real GDP despite an increase in the overall price level is indicative of the fact that the productivity level of the economy is deteriorating. Further, cost-push inflation also affects employment as the decline in real GDP results in decreased demand for goods and services that then compels firms to lay off workers and decreasing the employment. As such, this type of inflation results in a fall in living standards.

Most often governments intend to implement a deflationary fiscal policy such as higher taxes, lower spending, etc. while central banks tend to increase the interest rates. Both measures are expected to increase the cost of borrowing which is then likely to cut down consumer spending and investment. However, the problem with higher interest rates is that even though it is likely to reduce the inflation rate, it has the potential to result in a big fall in the GDP.

As such, a better long term solution to cost-push inflation can be an implementation of improved supply-side policies that are expected to increase productivity. However, the problem with this solution is that such policies are likely to take a long time to have any effect on the economy.

The primary driver of cost-push inflation increase is the cost of production factor that results in a decrease of aggregate supply, i.e. total production of goods, in the economy.

However, demand for these goods remains steady despite the weakening supply scenario that eventually gives way to the increase in the prices of the goods (inflation).