Wholesale price index is an index that tracks the movement of the prices of the frequently traded goods at the wholesale level (before the retail level) in a territory or a jurisdiction.

The definition above may be quite vague in terms of:

The territory is an area under the jurisdiction of a state. Wholesale price index (WPI) is usually calculated by a country, so the word territory would mean a country. The goods considered are those which are frequently traded in the local market. Hence this would also depend upon the country that is calculating it. For instance, the USA may want to consider the export of its apples as a good to form part of its basket of goods in the WPI calculation, while countries in the middle east would want to consider dry fruits in its basket. So, this differs from territory to territory. 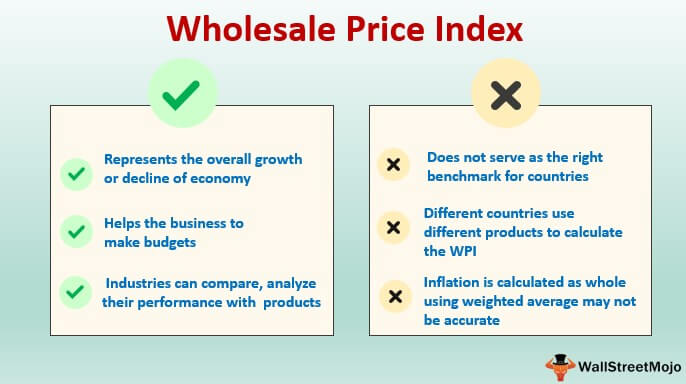 The WPI is calculated as mentioned earlier on the basis of goods. Let us understand the same with an example.

In this way, all the goods that are considered by the territory are calculated. A weighted average for the same is the WPI for the territory.

Components of Wholesale Price Index (WPI) and its Selection

Given that the main aim of the entire exercise is to conclude at an inflation rate that is reliable to the entire territory as a whole, the countries are required to evaluate the best index that suits them. For instance, Wholesale Price Index is used only in a few countries, mostly developing countries that are manufacturing dominant such as India. While the service sector dominant countries use PPI.

Yet another measure known as consumer price index (CPI) is also used by 150+ countries. Hence all these said and done, it is also essential to determine the frequency in which the decision is required to be made using the indices. For example, WPI and PPI can be calculated weekly as well a monthly basis, but CPI requires more inputs which are in most cases not readily available and hence would be released on a monthly basis. Countries may even tend to use multiple indices and conclude. In the end, what matters in how reliable and reasonable the inflation rate calculated.

This has been a guide to the Wholesale Price Index (WPI) and its meaning. Here we discuss WPI calculation along with examples, use, importance, advantages and, disadvantages. You can learn more about from the following articles –