What is Non-Operating Income?

Non-operating income is the income earned by a business organization from the activities other than its principal revenue-generating activity and examples includes profits/loss from the sale of a capital asset or from foreign exchange transactions, income from dividends, profits or other income generated from the from investments of the business, etc.

In simple words, a non-operating income of an entity is the income stream on the entity’s income statement that is driven by activities that do not fall under the core business operations of the entity. This type of non-core income stream may take one of many forms like gains or losses due to fluctuation in foreign exchange, asset impairments or write-downs, income from dividends arising out of investment in associates, capital gains and losses from investments, etc. It is also known by the name peripheral or incidental income.

It is usually shown as a “Net Non-Operating Income or Expense” at the bottom of the income statement. Most of the time, it appears after the “Operating Profit” line item.

It can be calculated, as shown below:

It may not have some fixed formula as it is more dependent upon the classification of the line item as operating or non-operating activity.

The calculation can also be done by –

Let’s look at some examples to understand this better.

Let’s assume a fictitious company ABC with income statement as shown below: 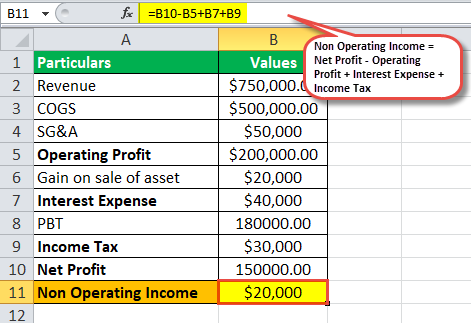 Now in order to calculate the non-operating income from the above income statement, we can follow the back-calculation approach as follows:

Now, if we have a close look at the income statement shown above, it is quite obvious to point at the non-operating line item, i.e., Gain on sale of the asset. But to come to this line item’s value based on some formula, we used a back calculation formula, which gives the same value as for the Gain on sale of assets.

Now let’s have a look at a real-life income statement of Microsoft company. 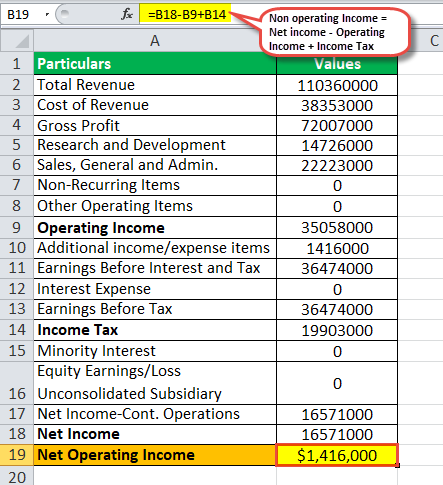 Both tend to experience sudden ups and downs as operating performance tends to remain more or less the same for stable companies. It appears at the bottom of the income statement, after operating profit line item.