VBA CHR is a built-in function that falls under the category of String/Text Functions and is used to get the character equivalent to the ASCII code. The equivalent Excel Workspace function of CHR is Application.WorksheetFunction.CHAR.

Given below is the Chr syntax.

This function has one argument. Where,

Charco de = This is a required parameter. It is the ASCII code for which an equivalent character is to be retrieved. 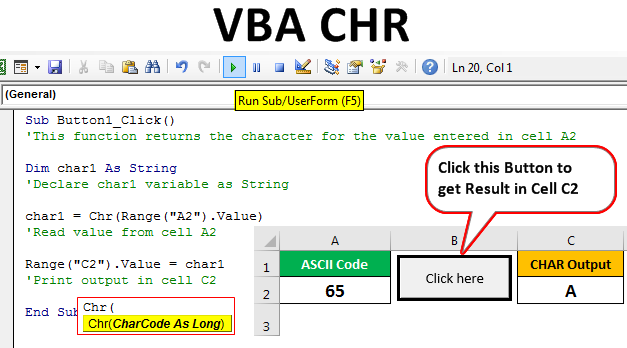 Step 1: In the excel sheet, add 2 header texts in cell A1 and C1, as shown in the figure below. Column A to enter the ASCII code and Column C to print the corresponding character calculated using the CHR function.

Step 2: Follow the steps shown in the next section to create a Button in the Excel workbook (please scroll the article) and change its caption to ‘Click here.’

Step 3: Write the following code snippet in VBA. The code reads the value from cell A2, which is given as an input to function CHR. The result is retrieved in String char1 and then assigned to cell C2.

Step 4: Save the VBA Excel code and go back to the Excel workbook to enter the input value in cell A2, as shown below.

Enter 65 as an ASCII input for which the corresponding character is to be found in cell C2.

Observe the result printed in cell C2. The code snippet we wrote in the step Step 3 is responsible for reading the input from cell A2, running the Chr function on it, and printing the value in cell C2, as shown below.

Step 6: Try changing the input in cell A2 and observe that you get the respective output in the cell C2, as shown below.

How to Create a Button in Excel?

As a VBA function, it can be used in excel macro code, which is entered through the Microsoft Visual Basic Editor integrated into MS Excel. Refer to the steps given below to know more.

For any VBA function to use in Excel, one must turn on the Developer Mode from File->Options Menu, as shown in the figure below. 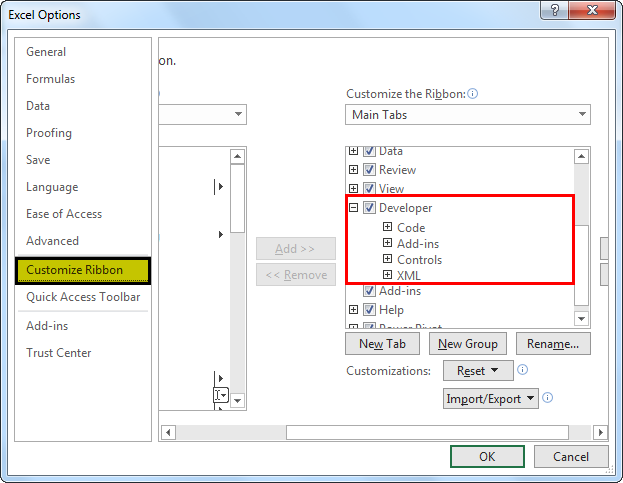 As a result, a new toolbar option named ‘Developer’ will be added to the workbook, as shown in the picture below.

Save the Excel Workbook as an “Excel Macro-Enabled Workbook.”

Step 3: Insert a form control in a workbook 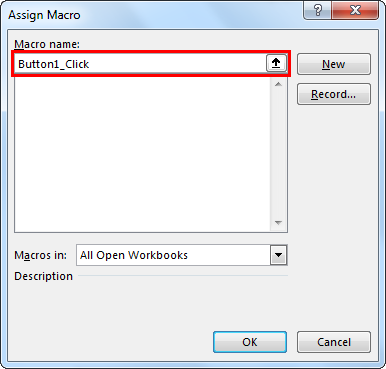 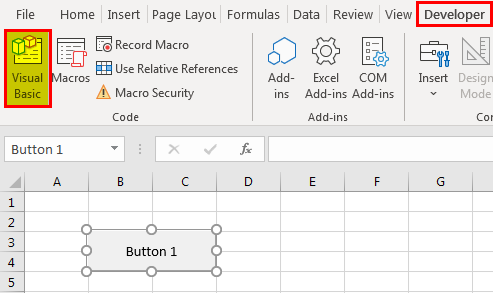 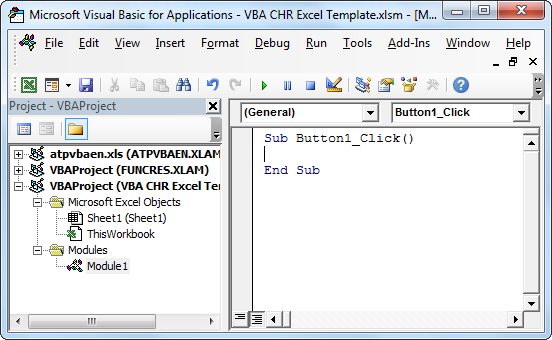 You can switch between the Excel workbook and the VB IDE by clicking on the extreme left icon below the ‘File’ menu, i.e., ‘View Microsoft Excel’ as shown below.

This has been a guide to VBA CHR. Here we discuss how to get a character of the ASCII code in Excel using the VBA CHR function along with examples and codes. You can learn more about VBA from the following articles –