Activist investor is an investor that purchases large stakes in companies to take control or get board seat/s with a view to bring about significant changes in the company to reduce costs, increase sales, improve efficiency and thus maximize profits and shareholders wealth, generally entering the company when the existing management is inefficiently managing the business and there exists a large scope of improvement.

An activist investor hunts for companies that are mismanaged, and the investor believes that bringing about radical changes in how the company operates and can turn the fortunes of the company. These investors – which are typically wealthy individuals, hedge funds, or private equity players –  pick up shares of such companies from the open market and bring their stakes to a level where they are entitled to a board seat.

Generally, the markets get to know about these acquisitions when these investors make necessary regulatory disclosures after acquiring a meaningful stake in the organization. In the U.S, investors file SEC Form 3D when they acquire more than 5% in a company. Shareholder activism takes many forms, including proxy fights, shareholder resolutions, and litigations. 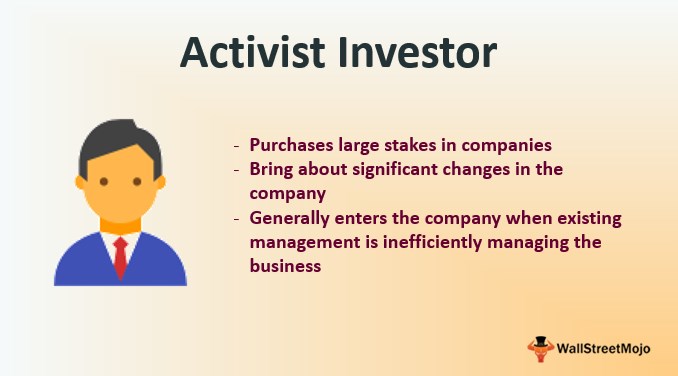 An activist investor’s role is to come up with ideas on how to prune losses or improve the profitability of the company. These investors generally come with an agenda and persuade other board members and shareholders to further their agendas on the future direction of the investee company.

When a company does not have a single significant majority shareholder and is running inefficiently by the professional managers, the business starts losing out to due to high costs, lack of new revenue streams, declining existing revenue streams, and many other issues which might lead to the ultimate demise of the business.

In such cases, they play an important role in bringing back life to the company. They take over board seats, bring the necessary changes, and significantly enhance shareholder value.

Most activist investors look for excesses in a company. For example, one of the most common targets is the companies that are sitting on a large pile of cash. If they think that the company does not require that much cash and there is a possibility of large distribution, if the investor is able to convince the other stakeholders, he will start building ownership in the company to achieve his objective of sitting amongst the board members and implementing his agenda, which could be a large dividend distribution or a buyback.

There could be other issues that the investor may think of fixing like high top management salaries, non-performing business units, under-productive workforce, or non-focused management. An activist investor ensures that the business becomes free from such inefficiencies and gets on the path of increased profitability.

Below is the list of some notable activist investors who have created a name in turning around businesses and creating shareholder wealth.

Carl Icahn is the founder and controlling shareholder of Icahn Enterprises, an investment holding company. Icahn has been an investor in notable companies, including Apple, Yahoo, and Netflix. Carl’s net worth as $17.5 billion in 2019, and was the 4th richest hedge fund manager in America.

Bill is the founder and CEO of the hedge fund, Pershing Square Capital Management. He is known for his short in Herbalife and his soured bet in troubled pharmaceutical firm Valeant Pharmaceuticals. Ackman’s successful bets in many companies over his investment career have helped him shore up a net worth of $1.7 billion in October 2019.

Daniel is the founder and CEO of Third Point, a hedge fund with around $11 billion in assets under management. Loeb started Third Point in 1995. His notable investments include Sony, Yahoo, Sotheby’s, and Nestle. Daniel’s net worth was $3.2 billion in 2018.

Barry is the founder of JANA Partners LLC, an activist hedge fund firm. Barry had a net worth of $1.3 billion in 2008 and is known for his bet in Whole Foods, in which he, along with other investors, owned 8.8%. He sold his investment for $300 million when Whole Foods got merged with Amazon.

Activist investors have been around for centuries and have gained popularity in the investor community and media for their ways of bringing about desired changes in the functioning of companies. They run campaigns and try sophisticated ways to get their way and force the management to pursue their agenda.

These corporate raiders have garnered appreciation and admiration for their contribution in bringing about a sparkling change in corporate boardrooms. Nowadays, their activism is more of a collaborative effort for the efficient functioning of the companies.

This has been a guide to Activist Investor and its Definition. Here we discuss the list of notable activist investor along with their roles and how does it work. You may also have a look at the following articles –