Suppose shareholders are not happy with the capital structure of the company. It may happen that the company is taking too many debts, which are jeopardizing the ownership of equity shareholders. So to prevent this from happening, shareholders can group together and start fighting for a common cause.

So as they are fighting against the management, they will have to replace few or all members of the board. For this to take place, shareholders do have to group together and fight for a common cause and vote against the board of directors. 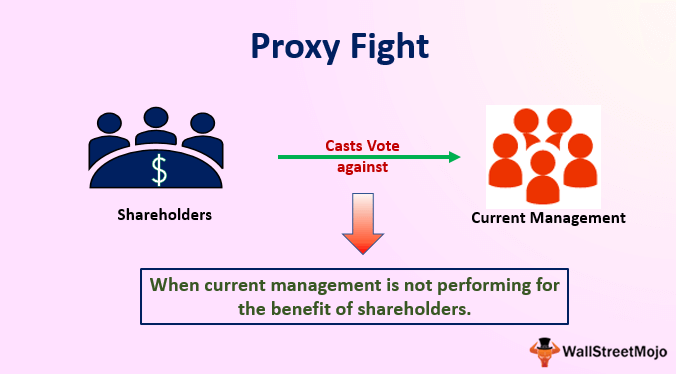 How Does Proxy Fight Work?

Say that shareholders are not happy with management’s dividend policy and other policies, and they want to change the management. So first of all, shareholders will have to make a group, who all are ready to vote against the management. Sometimes the ownership of stocks is not with the shareholders but with the brokers as they lie in the Broker’s account. So once all of them have cast their votes or have given the power to someone to proxy vote, then the results are submitted to the company’s Stock Transfer Agents.

The transfer Agent submits the result to the company’s corporate secretary before the shareholder’s meeting. If shareholders have the majority and there is no such policy in place to safeguard the board, then the management will be replaced.

Guyana Goldfield, a Canadian company, shocked everyone when they announced at their Aurora mine in Guyana the production declined by almost 1.7 million ounces, compared to estimates a year ago. Shareholders were not satisfied with the result and went for a proxy fight to change the management.

After a long battle, the dispute was settled, and the company’s CEO lost his job. As part of the agreement, the mining company appointed two independent directors and two other long-serving directors stepped down.

Reasons for a Proxy fight

There could be several reasons for a proxy fight. Few are mentioned below:

Say a company ABC wants to buy company XYZ. ABC tried to negotiate the deal with company XYZ’s management, and they are not ready to sell the company. If ABC can convince the shareholders of XYZ that ABC’s management will be able to manage the company better than the existing management, then XYZ’s shareholders can go for Proxy Fight and replace the board with new members supporting the takeover.

The strategy for proxy fight is always to arrange maximum support from shareholders. Mutual funds and Hedge funds hold a large number of shares of any company. So it becomes really vital to convince the fund managers to participate in a proxy fight.

How to Avoid a Proxy Fight?

There are several measures being taken by management to safeguard themselves in case of the proxy fight:

This has been a guide to Proxy Fight and its definition. Here we discuss how does proxy fights work along with the strategies and examples. We also discuss how to avoid a proxy fight. You may also have a look at the following articles –