The primary advantages of the joint venture includes generation of economies of scales as one entity’s strengths can be effectively used by other, better innovation in the product and services, access to more and better resources such as expert staff and latest technologies, competitive advantage and synergies in operations, lower cost of production and efficient price of products. 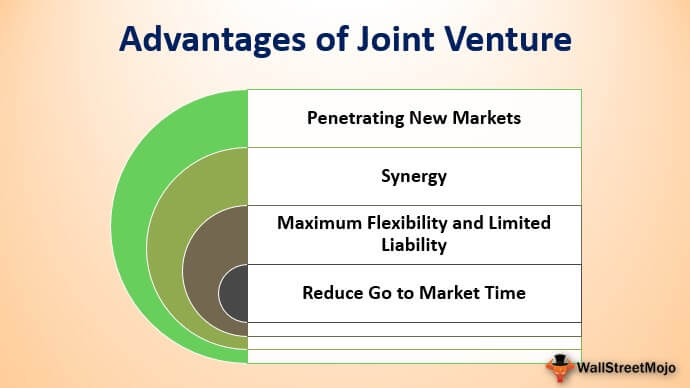 The joint venture provides a mechanism for companies to enter new markets without any legal hassles or regulatory restrictions. In fact, a JV makes this process a very smooth one as these challenges are already taken care of by the local player. The firm in such circumstances can focus on its core operating activities and invest in learning more about target customers, consumer behavior, and product positioning.

The greatest example of a Joint venture would be Maruti and Suzuki, which started in 1981, initiated by the government of India. For Maruti, it helped in gaining market share and access technical know-how of the superior Japanese technology, which helped it in surviving the competitor’s threat like Hindustan motors and their popular brand – Ambassador. For Suzuki, it was a great opportunity to enter a large growing auto market, especially in the pre-1990 era, when India was a closed economy, and it was not easy for foreign firms to open their offices here. In fact, many MNCs like Coke, Pepsi were closing their existing offices in India. Hence it was a win-win situation for both parties. This joint venture has stood the test of time and has helped in creating a firm that has provided multifold growth to its investors and shareholders and provided employment to a lot of many. As of 2018, Maruti Suzuki has the largest share (more than 50%) in the fourth-largest auto market in the world.

This is one of the implicit advantages of a Joint venture. Both parties coming together has their own strengths and weaknesses. The idea is to capitalize on these strengths. Two parties coming from different markets pool their resources and technical know-how to produce a better product.

An example of such a collaboration is IFB and Bosch. Bosch, a German giant with superior German engineering, collaborated with an Indian based engineering firm IFB. In this partnership, Bosch provided its superior technical know-how and expertise while IFB capitalizes on its network of established distribution channels. Such collaboration has helped not only in manufacturing superior automatic washing machines but also made sure that they reach the right customers through a well-established network channel. What has happened is that each party has brought its strength to the table, leading to a much better, suited, and well-positioned product. It should not be a surprise when this collaborated product boasts of the largest market share in the washing machine segment of the Indian market.

A joint venture is a very efficient and progressive collaboration between the two parties as it provides maximum flexibility and minimum liability. The two partners can focus on their core business and outsource their non-core activities, creating better products with limited risk. Also, this partnership provides a very flexible approach, as the two firms are not bound by a legal contract. They can continue this partnership as long as they feel it is benefitting them. It is as easy to dissolve a Joint venture as it is to start it. The advantage of the joint venture is it aimed at promoting collaboration; the moment parties feel they are not gaining anything, they can come out of it. Thus, a JV can be of a limited lifetime, operational only till it benefits both the parties. In fact, more than 80% of joint ventures end in a sale of stake by one partner to another.

A great example of such a partnership is Hero Honda – a joint venture between Indian 2 wheeler maker Hero and Japanese auto giant Honda. Their partnership goes back to the 1980s (again pre 1990s liberation era) when Hero Honda motors limited was set up in 1984. During the last two and half decades, the new entity has produced a great product line like CD dawn, CD Deluxe, Pleasure, splendor, etc. Not only there has been an enriched product line, but they were also the pioneers in producing vehicles with better fuel thrift, low emission, and better mileage, which eventually became the industry benchmarks. The growth has been phenomenal, with the JV posting double-digit growth numbers year on year since inception. Lately, the two have decided to part ways, putting an end to the partnership because of some internal disputes. However, the dissolution of the JV has been as smooth as was its foundation. The two have agreed to provide mutual support and royalty for some time so that the transition can be smooth. It has eventually dissolved with Honda selling its 26% stake to the Munjal group.

The advantage of a Joint venture is it helps firms in gaining access to new capacity, technological knowledge, and new markets in a reduced time frame without causing any detrimental effect on the quality. In fact, most of the time, it helps firms in making up for the lost time that might have given an edge to its competitors by getting into a joint venture, thus tackling competition with a better strategy and limited risk.

KDDI Corporation, a telecom major in Japan, got into a JV with Rakuten Inc in 2018. The joint venture aims at the mutual use of assets to counter the competitor threat and gain market share in the growing field of payments, logistics, and telecommunications in the Japanese economy. KDDI will provide roaming services to Rakuten and will, in turn, use Rakuten’s existing ecosystem of payments and logistics infrastructure. The JV has helped KDDI in countering the competitor threat and to make up for the lost time as it was a late entry into the QR code payment ecosystem.

Even though in a JV, firms operate as separate entities, their partnership helps in building better products, eventually capturing more market share, providing a win-win situation with maximum gain and minimum commitment.

This article has been a guide to Advantages of Joint Venture. Here we provide the list of top 4 advantages along with detailed examples and explanations. You can learn more about accounting from the following articles –