Synergy in M&A | Types of Synergies in Mergers and Acquisitions

Synergy in M&A is the approach of the business units that if they combine their business by forming one single unit and then working together for the accomplishment of common objective, then the total earnings of the business can be more than the sum of earnings of both the businesses earned individually and also the cost can be reduced by such merger.

Synergy in Mergers and Acquisitions

Synergy is the concept that allows two or more companies to combine together and either generate more profits or reduce costs together. These companies believe that combining with each other gives them more benefits than being single and doing the same.

In this article, first, we will understand synergy first and then we will talk about the main emphasis of the article, i.e. types of synergies. 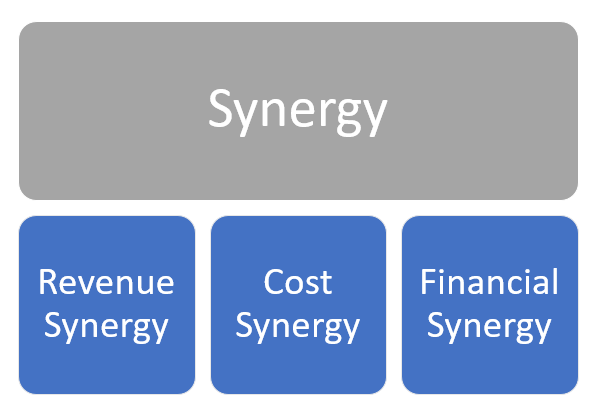 What is Synergy in Mergers and Acquisitions?

Let’s talk about synergy in mergers and acquisitions in a different manner. We will directly take an example and illustrate how synergy in M&A works.

The reason they decide to merge with each other is that Company B produces the raw materials Company A uses to prepare the finished products Company A sells.

If they merge, Company A doesn’t need to look for a vendor and sourcing raw materials would be seamless.

On the other hand, as a result of the merger, Company B doesn’t need to worry about sales and marketing. All they need to do is to improve their processes to produce better raw materials for Company A. 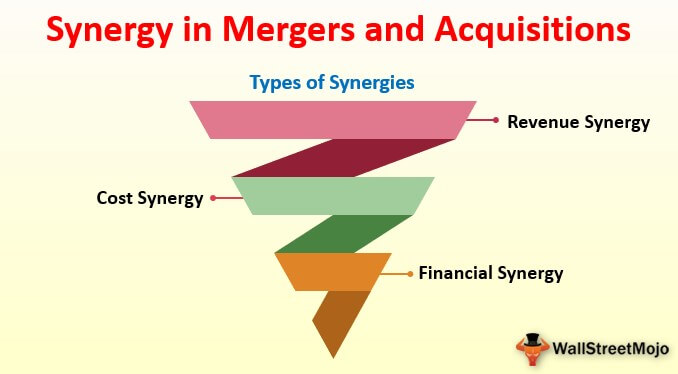 This is the first of the three types of synergy in mergers and acquisitions. If two companies go through revenue synergy, they happen to sell more products.

For example, let’s say that G Inc. has acquired P Inc. G Inc. has been in the business of selling old laptops. P Inc. is not a direct competitor of G Inc. But P Inc. sells new laptops quite cheaply. P Inc. is still very small in profit and size, but they have been giving great competition to G Inc. since it is selling new laptops at a much lesser price.

As G Inc. has acquired P Inc., G Inc. has increased its territory from selling only used laptops to selling new laptops in a new market. By going through this acquisition, the revenue of both of these companies will increase and they would be able to generate more revenue together compared to what they could have done individually.

And here lies the significance of revenue synergy. 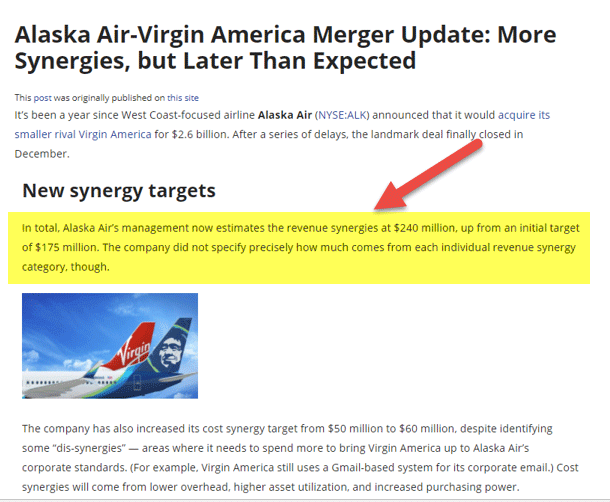 We note from the above example that Alaska Air acquired its smaller rival Virgin America for $2.6 billion. Alaska’s Air management estimates the revenue synergies at $240 million.

The second type of synergy in Mergers is the cost synergies. Cost synergy allows two companies to reduce costs as a result of the merger or acquisition. If we take the same example, we took above; we would see that as a result of the acquisition of P Inc., G Inc. is able to reduce the costs of going to a new territory. Plus, G Inc. is able to get access to a new segment of customers without incurring any additional cost.

Cost reduction is one of the most important benefits of cost synergy. In the case cost synergy, the rate of revenue may not increase; but the costs would definitely get reduced. In this example, when the cost synergy happens between G Inc. and P Inc., the combined company is able to save a lot of costs on logistics, storage, marketing expenses, training expenses (since the employees of P Inc. can train the employees of G Inc. and vice-versa), and also in market research.

That’s why cost synergy is quite effective when the right companies merge together or one company acquires another. 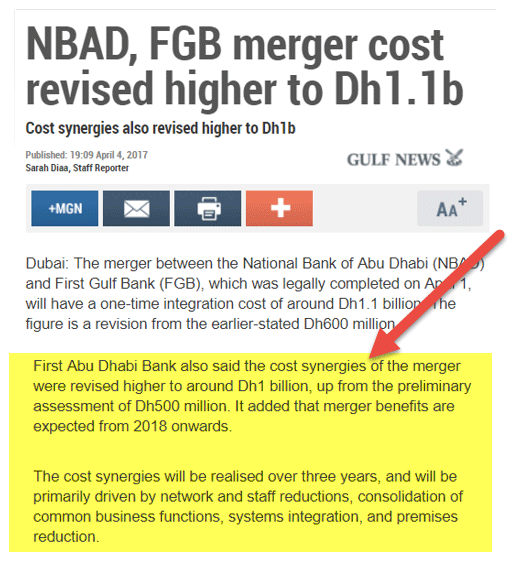 We note above that the merger between the National Bank of Abu Dhabi and First Gulf Bank will result in the cost synergies of around Dh 1 billion. The cost synergies are expected to realize over the next three years driven by network and staff reductions, system integration, consolidation of common business functions, etc.

The third type of synergy in mergers and acquisitions in the Financial Synergy. If a mid-level company goes to borrow a loan from a bank, the bank may charge more interest. But what if two mid-level companies merge and as a result, a large company goes to borrow the loan from the bank, they will get benefits since they would have better capital structure and better cash flow to support their borrowings.

Financial synergy is when two mid-sized companies merge together to create financial advantages.

By going for financial synergy, these two companies not only achieve financial advantages in the case of borrowing loans or paying less interest but they also are able to achieve additional tax benefits. Plus, they are also able to increase their debt capacity and to reduce the combined cost of capital.

As an example, we can say that Company L and Company M have merged to create a financial synergy. Since they are mid-level companies and if they operate individually, they need to pay a premium for taking loans from the banks or would never be able to reduce the cost of capital. That’s why the merger has turned out to be quite beneficial for both of these companies and we can call it financial synergy in Mergers and Acquisitions.

Can these three types of synergies in M&A be achieved at the same time?

Now, this is the burning question. In an ideal world, these three can be achieved at the same time.

But usually, the parties who decide to go for merger or acquisition aims for one or a maximum of two types of synergies.

No matter what they choose to achieve, the most important thing is whether the merger or the acquisition would turn out to be beneficial or not.

Aiming for synergy and achieving synergy in Mergers and Acquisitions are completely different things.

If both the companies decide to act together and their employees don’t resist the change, it is quite possible to get great benefits from the mergers or the acquisitions. But in a few cases, employees of either of the companies aren’t able to accept the sudden change in working structures, styles, environment, the center of control, and so on and so forth.

As a result, not all the mergers or acquisitions turn out to create greater benefits.

Another important aspect in this regard is how one would understand whether to buy a company or to sell one or to merge with another. To understand the opportunity both the buyers and the sellers need to have a comprehensive understanding of the businesses they are in (or they want to be in, in the near future).

Understanding an opportunity to synergy in M&A isn’t easy to locate. It needs years of experience and a sense of market knowledge that only experienced business owners can have. Since the failure can be much brutal, it’s always prudent to look at every possible factor before going for any sort of merger or acquisition.

This was the guide to Synergies in Mergers and Acquisitions. Here we discuss the top three types of synergies in M&A along with practical examples.  Here are the other articles that you may like –