Suppose if we have data that contains hundreds of rows and multiple columns, and we need to create a code that will use the data. Now, in this case, we have to create multiples of the variable that will fetch the value from the cells and give them to the program. This will be very tiring to create this much of a variable, and hence in such cases, we use Arrays in excel. 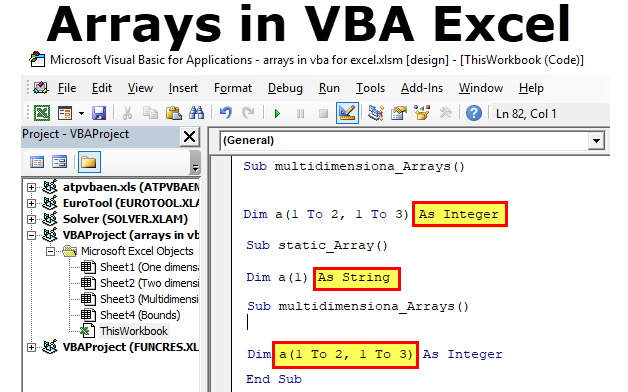 Arrays hold the data set in their memory and do not need us to declare the variable for each of the value that needs to be fetched from the data. The need for using arrays is because of the fact that in an excel variable is designed to hold one value at a time. However, when multiple values are stored by a variable, it becomes an array.

Array works on the “Mathematical rule of a matrix.” That is, they identify the data by its location only. Suppose if we have to make VBA understand that we need “20” in cell “B3,” then we have to write the code of the location as (3, 2) where the first value stands for the location of the row and the second value stands for the column number. In excel world, these code of locations is called “Upper bound” and “lower bound.” By default, the location in excel starts from one and not from zero, so excel sees “A1” as row number 0 and not row number 1.

Similarly, the columns start from zero and not from one.

These arrays can be defined as a static array or dynamic array. If we define them as a static array, this means that they cannot hold more than the variables as defined while coding them. If we are not sure about the value that is required to be memorized by the arrays, we create dynamic arrays, and in such cases, they can hold infinity numbers of values.

Now, after we have selected the type of array that is required, we will now have to enter the data in these arrays.

This data has to be given one by one to excel in the below ways. 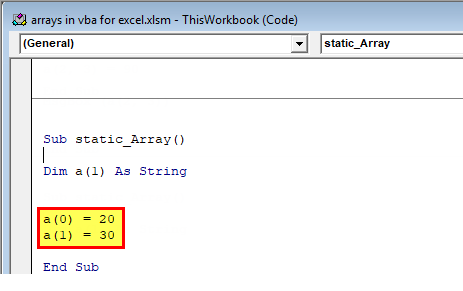 After data is stored in these arrays, they are ready to use as a variable in the VBA coding.

Let’s see each one of them in detail.

An array that has a Predefined count of value that can be stored in it. 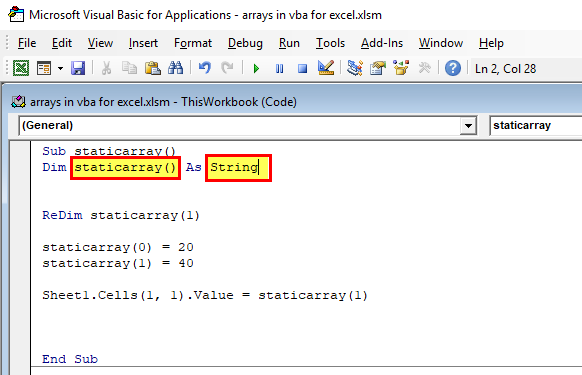 Array with a not predefined count of value that it can handle. 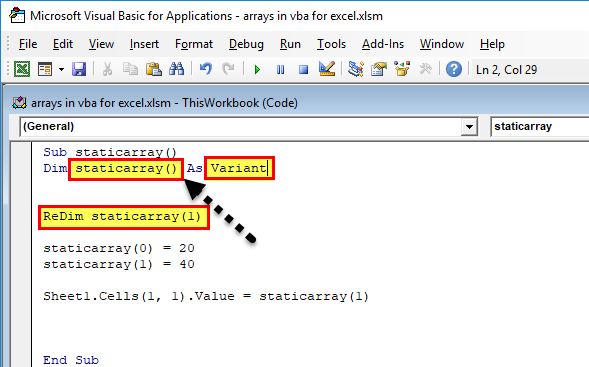 An array that can hold only data either from rows or columns. 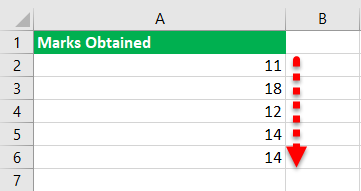 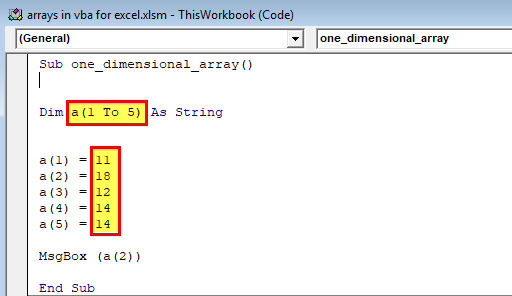 An array that can store a value from the rows and columns. 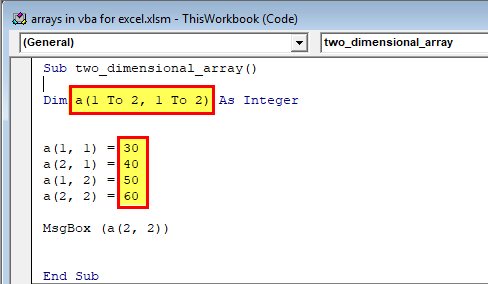 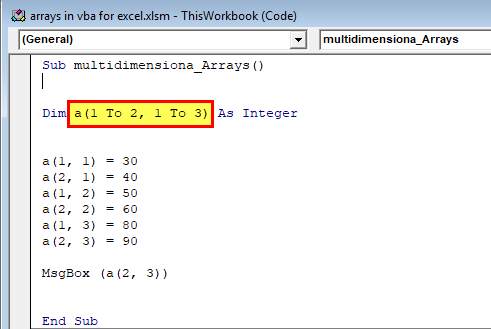 How to use Arrays in VBA (with examples)?

Arrays can be used in many situations, but they must be used when the number of variables that are to be declared is large in number, and it is not feasible to declare them.

This will open the VBA editor. From there, we have to enter the code in “This worksheet.” 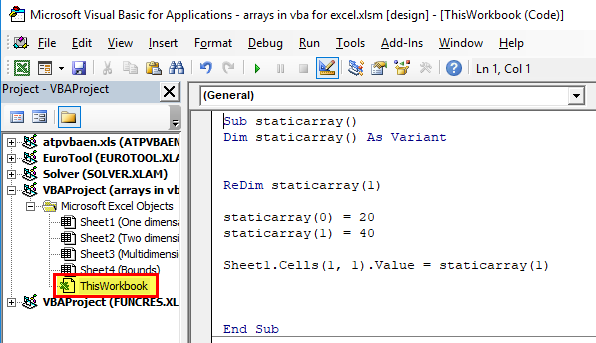 Choose the type of array that you want. Should it be a dynamic or static array?

If we need a dynamic array, then we will define the dimension as “variant.” 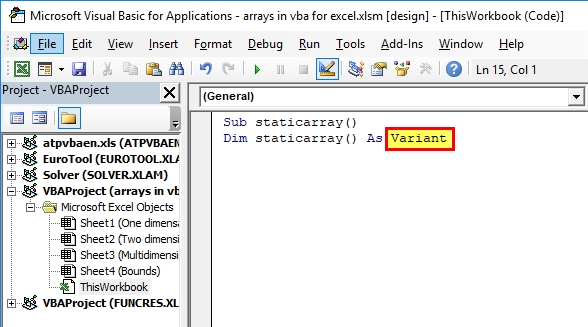 If we need a static array, then we will define a dimension as “Static.” 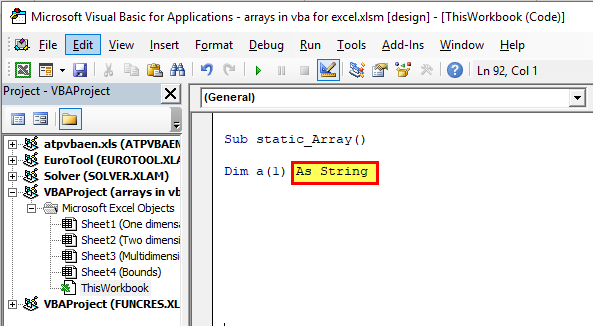 Define the columns and rows that you want the array to store.

If we have entered “1” in the bracket, this means that the array can hold two rows value as excel counting starts from zero. 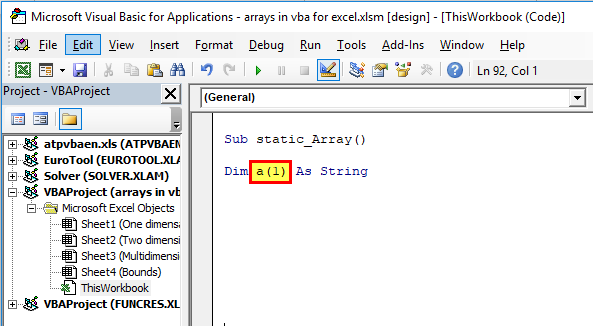 If we need columns and rows also, then we need to define both of them. 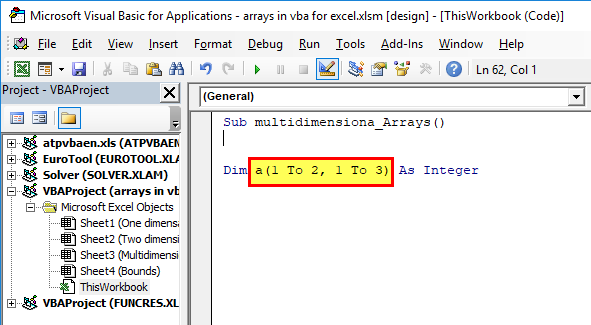 Here we have changed the rule of how excel counts rows and asked it to count from “1” and not from zero.

The input of data in the array.

The data has to entered cells wise. Here the data is to be entered in the form of (I,j) where “I” means the row, and “J” means the column. 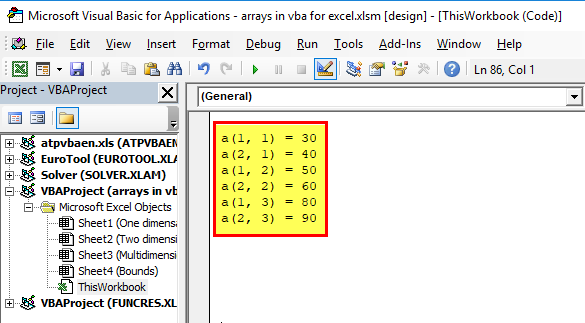 We are closing the code.

After the data has been entered for the array, the last step will be to close the code. 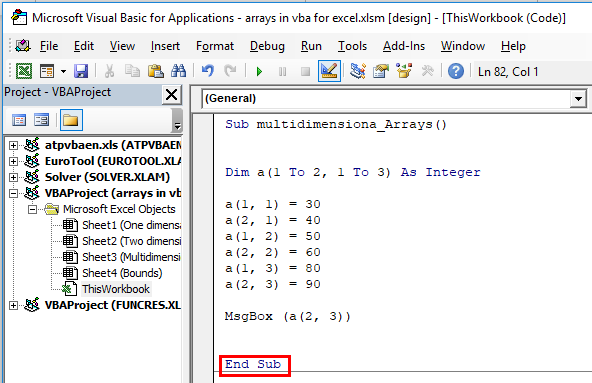 This has been a guide to VBA Arrays. Here we discuss the different types of Arrays, how to declare and use them, along with examples and downloadable templates. You may also look at these useful excel tools –