Black Tuesday refers to October 29,1929, when many investors panicked and started selling their shares on the new york stock exchange resulting in a trading volume of 16 million shares and decline in the Dow Jones industrial average by more than 12% in a single day.

It was the beginning of the 12-year great depression, which had a significant impact on industrial companies. It occurred during World War 1 when many Americans started migrating into more popular places in order to have an improved life. 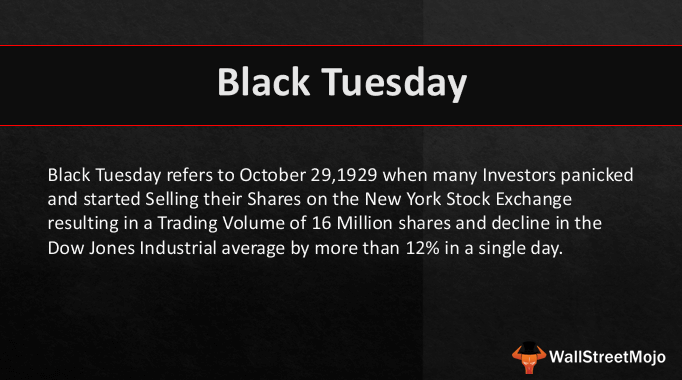 How did the Black Tuesday Market Crash of 1929 Start?

Between 1929 and 1932, industrial production in the united states fell down by more than 46% and foreign trade by more than 70 %, causing the economy to slow down. The stock market crash led to the great depression in the European continent, with many salaried people losing their jobs and protesting on the road. The police had to control the protest by harassing the protestors, which resulted in the violation of public order. It was this place where the aggressive twenties were at a complete halt, and there was an era of this great depression that was hovering around the world, thereby pressurizing the economy.

Due to the sudden fall in the stock prices, this was the sweet spot for the investors who bought the shares at throwaway prices. It was a great time to acquire new customers to invest their money in the financial markets since the markets were at an all-time low. This had a massive impact on the margins of the mutual funds since the average cost of the investments came down drastically and was poised to take a bigger return.

It also resulted in a heavy volume of sales of the products since people were buying the same at throwaway prices. It enabled even poor people to enter the financial markets and earn high returns in the future. Many retailers in the industry saw this Black Tuesday as a business opportunity since they started clearing their old stocks in order to fill the gaps with fresh inventory before the festive season.

There was very heavy discounting done by the retailers in order to boost the sales and take advantage of the great depression in order to clear out the stock and fill the shop with new fresh stock.

How Most Investors Suffered during Black Tuesday 1929?

The investors lost $30 billion in investments by selling the equity stocks at a very discounted rate on the stock exchange in order to generate sufficient funds required for their survival and growth. Thousands of brokers started demanding margin calls from their investors in order to cover the open position. Tremendous panic in the stock markets among investors due to the global selloff because of the fall in the prices.

Start of the great depression around the world, which hampered the financial and the ecosystem of the globe, thereby putting pressure on the federal reserve to hike the rates in order to control the economy. It led to global economic collapse in other countries as well as leading many people to leave their jobs and closing down the business operations of the company. Due to the economic slowdown, many people started losing their jobs, and the system came on a standstill with many banks and financial institutions going on a toss. All the global investors had panic and started selling off their equity stake in companies.

Black Tuesday was one of the worst days in the financial services industry losing enormous wealth from the investors. This day will always be remembered by the investors in the history since it was the beginning of the great depression, which had shocked the entire economy and also simultaneously led to many financial reforms in the world which laid down guidelines to have a smooth economy.

This article has been a guide to what is Black Tuesday and its definition. Here we discuss the history of Black Tuesday 1929 along with how it affected the investors. You can learn more about financing from the following articles –