Stock Market Crash in 1987, also known as Black Monday, was one where DJIA (Dow Jones Industrial Average) fell 22% (508 points) on a single day (19 October 1987) and had a contagious effect in the sense that the fall not only affected the US, but the whole world.

In the early 1980s, the whole world went into recession, mainly affecting developed economies. The US, after the recession, saw rapid growth until the year 1985, after which the economy grew at a slower pace. But the stock market, despite a slowing economy, had a bull run from late 1985 till August 1987. Inflation was rising, and the price to earnings ratio of the stock market was well above its historical PE. These were the ominous signs for the things to come, and the crash looked imminent.

There were already talks of a slowdown and bear market, and that led to the falling of the US stock market for a week before the black Monday. People traded on stock exchanges with growing apprehension and fear. Before the opening of the stock market in the US on 19 October, a steep decline in stock markets of Asia and the UK was seen. This cumulative fear leads to piling up of sell orders on black Monday, i.e., 19 October 1987, and the fall in Asia and UK acted as fuel to fire and translated already falling market to a crash in the US stock market. 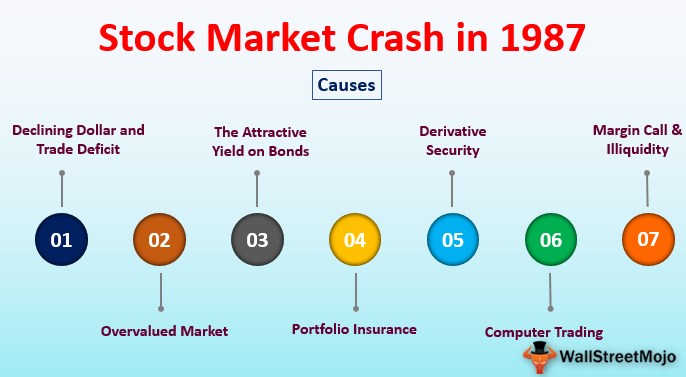 Causes of the Stock Market Crash in 1987

There have been many explanations for the cause of the 1987 crash. The following are some of them.

Many believe the announcement by the department of commerce regarding the widening trade deficit trigger the crash on that fateful day. The announcement led to nervousness among foreigners and created fear among other market participants in anticipation of a weakening dollar. As a result, the foreigners pulled their money out of dollar-denominated assets, which further caused pressure in markets.

#2 – The Attractive Yield on Bonds

A falling dollar due to widening trade deficit and market participants pulling their money out in dollar-denominated assets led to an increase in interest rates and thereby making yields attractive on bonds. People who were already skeptical about the stock market, the attractive yield on bond provided them with a good alternative.

There were signs of continues deteriorating fundamentals of the stocks market as they were trading above their fair value. The stock market acts as a barometer of an economy, but the divergence between the economy and the stock market was visible. The apprehensions regarding the future course of the market due to the slowing economy and evident bubble in the market led to panic selling.

It was considered to be one of the biggest reasons for the crash of 1987. Portfolio Insurance refers to a strategy to hedge or limit losses by buying and selling stocks and futures. People tend to buy in a rising market, which may create a bubble and sell in a falling market, which may lead to a crash, which it did. They short sell futures in expectation of the falling market, and if the market falls further, they short sell even more, thus destabilizing the market.

When the markets were opening lower day after day, computer models signaled to sell stock/index future, which further created downward pressure. After a further decline, models again recommended sale,s which led to piling up of sell orders that eventually led to the crash.

Computerized trading was another culprit for causing the crash. Computer trading is used to enable market participants and brokers to place and execute large orders quickly. Further, the programs and software were developed in such a way that they execute stop-loss orders automatically if they fell below a certain percentage and sold them without any permission. As the market fell, stop losses were hit, and the program executed large stop-loss orders and liquidated those positions. It thus created a domino effect on the already tumbling market.

Derivatives like futures and options derive their value from underlying stock in the spot market. But on 19 October 1987, futures were trading at a discount whereas futures trade at a premium to their underlying. Due to selling pressure across the world on that day, large sell orders were placed on the stock market in the US. But the sell orders were so huge that buy orders could not fill them, and markets were shut for some time. Meanwhile, the futures market was open, and due to large sell orders, prices went down in the future market.

When the stock market opened, the difference between futures and market was huge. Futures that are supposed to trade at a premium were trading at a huge discount. It created panic among investors, and they started winding up their positions. Many arbitrage traders also took this opportunity to make a riskless profit from this situation by buying futures and selling spots. Due to both these factors gap between futures and spots narrowed down, but it caused a stock market crash.

Effects of the Stock Market Crash in 1987

The stock market crash of 1929 was a series of the crash that occurred on Thursday (also known as black Thursday) on which the stock market fell by 11%. On Monday, the following Thursday, the market fell another 13%, and then it again fell on Tuesday. Whereas in 1987, the market crashed on a single day.1929 crash led to the great depression, which was the worst ever economic recession the world has seen. Unemployment rose, banks defaulted, companies went bankrupt, and fed didn’t act swiftly to inject money into the system. In 1987, stock markets crashed, but the recession didn’t follow crash due to the money injected into the system by the fed, and also, the reasons were more of technical nature rather than fundamental.

It took almost 10 years for the world to come out of the great depression of 1929. The depression had affected the world vastly, and it took a lot of time to recover from the recession. Markets in 1987 recouped in 2 years without going into depression and gave stellar returns afterward. Its effect was much lower than predicted. Although the 1987 crash saw the greatest ever fall in the market, its effect was limited as compared to the 1929 crash, which led to one of the highest ever unemployment rates and shutting down of banks.

The 1987 stock market crash had a global impact. Although it had had a record fell, it recovered quickly and made a new high in 2 years. No recession followed the crash as anticipated until the oil crises of the 1990s. 1987 crash, as believed and researched by many, was more due to technical and less due to fundamental reasons. The technical reasons and flaws in the trading system were overhauled to prevent any such situation from occurring again.

This article has been a guide to What is Stock Market Crash in 1987. Here we discuss how does the stock market crash, its causes, effects, and differences. You can learn more about from the following articles –