What is the Stock Market Crash?

A stock market crash is a phenomenon when stock prices across all sectors start falling rapidly and is often result of some global factors like war or scam or collapse of a certain sector. Panic works as the catalyst as all the investors start to sell at the same time, leading to the crash.

Stock Market mostly runs on sentiments. If people believe that the newly elected government is going to bring a massive change in the economy, then investors feel confident, and they start investing in the equity market of the country. Similarly, if there is any event that caused the investor to lose faith in the market of a particular country, then investors start to dump stocks of the country frantically, leading to a crash. Rational thinking will never lead to a crash. The crash is always caused by panic.

From 2002 to 2007 Real Estate Market of United States was at its Boom. Real Estate prices were doing up like crazy, and every year, prices were moving up by approximately 40%. All the banks were giving house loans with the house being the mortgage. They were the most secure loans because if anyone would have failed to pay back the loan, then the bank can easily recover the money by selling the house.

Banks then started coming up with a new kind of product called Mortgage-Backed securities. They clubbed the loan papers into several tranches and started issuing bonds of them. Rating agencies gave the highest ratings to these bonds as they were the most secured ones backed by real-estate. It slowly led to a bubble that finally collapsed in 2008. The event was so huge that several stock markets across the globe faced its impact. 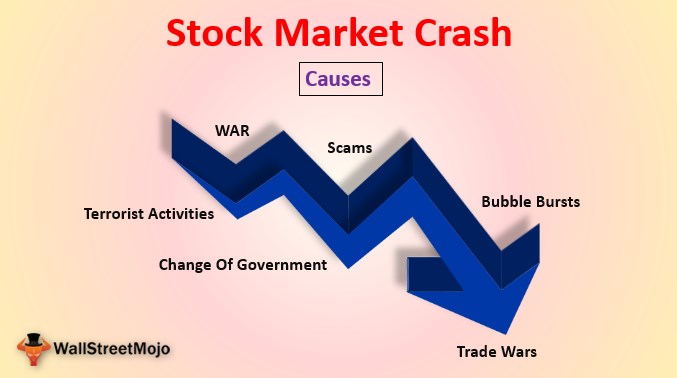 How to Prevent Stock Market Crash?

If there was a set formula by which market crashes could have been prevented, then there would have been no crashes in the world. Having said that, there are still a few signals by which you can predict a crash.

War is the most critical issue that leads to a market crash. Whenever countries go on WAR, the faith in those countries decreases. War is very expensive to continue, so the government of the country in war starts to deviate resources from all sectors to the only defense sector. War hysteria creates panic, and investors start to dump stocks.

Terrorism is a global issue now. The crash of the World Trade Centre in America lead to this crash worldwide. So if there is any terrorism threat, then it creates panic, and the stock market can crash. There are several intelligence reports which are available suggesting that terrorists plan to attack stock exchanges so that there is a crash and the whole economy of that country suffers.

At times countries go on trade wars. If suddenly a European country goes on a trade war with an OIL exporting nation and the OIL exporting nation says that they will no longer export crude to that particular European nation, then it will lead to this crash. Crude is an essential commodity of the modern economy. Any country runs on oil. If OIL is stopped, then the entire economy will come to a standstill. It will create panic, and investors will start dumping stocks.

A bubble is a scenario when the stock prices of a particular sector or across sectors start to rise limitlessly. The Price/Earnings ratio crosses the all-time high, and the index reaches an all-time high. So all this put together is like a bubble as so much money has been poured in the market, and the market has crossed its intrinsic value by many folds. At this moment, single negative news causes panic, and the whole bubble bursts. This bubble burst leads to this crash.

Investors invest in countries with a strong and ethical government. If there is a change in the government and the new government is not liked by the investors. Then there will be a panic, and the market may crash.

There have been crashes in stock markets due to scams several times. Scams lower the confidence that investors have in the economy. It creates a tremendous negative impact and can lead to crashes that may take several months to recover.

Outbreak of Global Pandemic such as the Corona Virus (Covid-19) that spreads much faster than anticipated causes uncertainties in the investor market as countries take measures to present this disease from spreading further. Such pandemic causes fear and distrust leading to stock market crashes.

Usually, the stock market crash happens in days. Historically it is seen that the second days are worse than the first day because panic starts to spread more from the second day. There is no set timeline. It may last for days or weeks. Once the crash stops, it takes several months to recover.

Stock Market crashes though rare, but they should be prevented. Faith in the economy is dependent on the proper functioning of the Stock Markets. The government should be very careful and should take proper measures to prevent such crashes from happening.