What is Bond Refunding?

Bond refunding can be defined as a corporate financial planning activity undertaken with the objective of lowering financing cost by retiring or repaying old outstanding bonds issued previously with high-interest rates with the help of proceeds collected from new debts issued usually having lower interest rates.

Bond refunding is a corporate action whereby funds procured from investors are repaid to them with the help of newly issued bonds, i.e., the company repays old bondholders with the money received from new bondholders. It is regulated by the agreement of bond, which may restrict the holder to repay the bond until a certain period or date. It is a practice to attract initial investors who wish to lock their funds for a certain period of time at a desired rate of return. 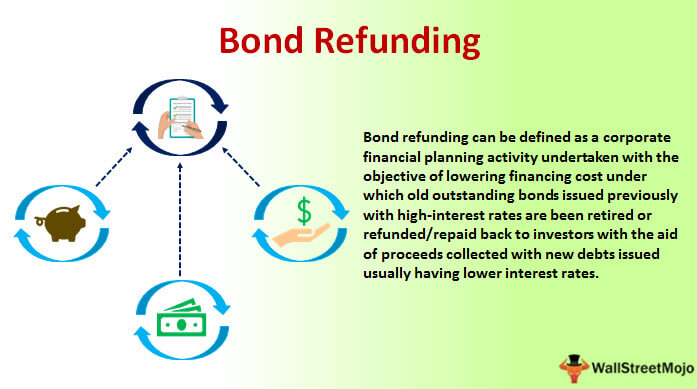 A bond may be sold before maturity in order to lower the cost of finance. It may also be refunded due to the increase in the credit rating of the bond issuer, which will help the bond issuer to procure funds at lower interest rates. Sometimes refunding bonds offset refunding fees and other transaction charges instead of continuing to repay interest. Bonds may also be refunded to lower the restrictions applicable to them.

This process is very frequently practiced in the market where the interest rate has fallen as the existing debt is likely to be paid with the cheaper debts from the current market. Refunding is not so easy. It occurs only with callable bonds. Callable bonds are the bonds that have the clause to get redeemed before its maturity period. Under these bonds, holders have to face the risk of bonds being called up by the owner before the maturity period due to a decline in interest rate. This was the common practice by the bond issuers.

Therefore, in order to protect the bondholders from premature redemption, a clause known as the call protection clause was inserted in the bond agreement. This call protection clause indicates the lock-in period of the bond, which fixed time limits before which the bond cannot be called up. If the interest rate falls too low during the lock-in period, which calls for redemption of bonds, at such time, the owners are allowed to issue new bonds in the interim period where the sell proceeds of interim bonds will be used to buy treasury securities, which need to be deposited in the escrow account.

Interest earned on escrow account will help to pay-out interest on already issued high-interest rates bonds. When the lock-in period expires, these treasuries are sold, and the deposited funds in the escrow account are utilized to pay bonds liabilities. Money is repaid to all bond-holders as per their entitlement.

Bond Refunding can be defined as a capital restructuring activity undertaken by any corporate to lower down its cost of borrowing. Usually, already issued bonds are repaid or retired at maturity or even before maturity (if allowed as per bond agreement) with the proceeds of newly issued bonds with a lower interest rate. Market interest rates keep changing, and to avail the benefit of lower interest cost funds, corporates usually undertake this task.

This has been a guide to What is Bond refunding & its Definition. Here we discuss the process of Bond refunding and examples along with advantages and disadvantages. You can learn more about from the following articles –