The Capital structure of a company is nothing short of a chequered board. Various modes of financing are available to suit the situation as well as the requirement of the companies. We all know that a simple debt structure involves procuring finances followed by subsequent payment of interest and principal on pre-determined dates. However, when it comes to corporate financing, this has many more layers added to it. Companies usually plan to design a structure that is easy on the cash flows, tax-efficient, and flexible enough to factor in unforeseen events.  One such debt structure is called “Payment-in-Kind” or PIK.

PIK bond is the one on which the borrowing company pays no cash interest until the total principal is repaid or redeemed.  Instead of this, on each interest payment due date, the accrued interest is capitalized. It may either be added to the principal amount or maybe ‘’paid’’ through the issuance of further loan notes, bonds, or preferred stocks with interest or dividends paid in securities. In fact, this is how it derives its name, which means the payment of interest can be made through instruments other than cash. It is to be noted that the securities used to settle the interest or dividends are generally identical to the underlying securities, but on many occasions, they have different terms.

Going back to the basics, payment in kind is nothing but a form of Mezzanine debt. Mezzanine debt is the intermediate layer of capital that features between secured senior debt and equity. This is a capital that is generally not secured by assets and is primarily disbursed depending on a borrower’s (company’s) ability to repay the debt from free cash flow. Mezzanine financing is usually more expensive than senior debt; however, it is less expensive than equity.

Let us understand Payment in Kind in a simpler way:  Assume a company takes a mezzanine loan for $20 million with a 15% in current cash interest and 4% in PIK interest, without warrants and with the due date of note in 5 years’ time. After a year’s time, the current interest, $3 million, is paid in cash as per the terms of the deal, while the PIK interest of $800,000 is paid in security and is accumulated to the principal amount of the note, increasing that amount to $20.8 million. This continues to be compounded till the end of the fifth year when the lender will receive the Payment in Kind interest in cash when the note is paid at maturity.

Features of PIK or Payment in Kind

The main features of a PIK or Payment-in-Kind debt are:

What are the reasons for taking Payment In-Kind?

We know that most companies opt for Payment in Kind due to the certain liberties it provides. Let us dig further to understand the detailed reasons to include Payment-in-Kind (PIK) debt in a leveraged capital structure.

This debt instrument augments the borrowing capacity of a company, allowing them to leverage their capital structure without creating too much pressure on their cash flow.

Payment in Kind debt gives the borrower a greater deal of flexibility as compared to other debt instruments. This further enables them to protect cash for other capital expenditures, inorganic growth, or acquisitions or to hedge against the possible downturns in the business cycle.

Many times, PIK is used before a cash-out event (for example, an IPO or liquidation) in order to anticipate and lock-in cash realizations and protect ‘’upside’’ for the equity sponsor at the same time.

Suitable for companies with the long operating cycle

For companies that are usually cash-strapped and have long gestation cycles for their products, Payment in Kind seems to be the most suitable form of financing. They have the opportunity to scale up their operations with additional financing but with minimal cash outflow.

Types of Payment in Kind

Payment in Kind manifests itself in various forms. While the underlying concept remains the same, there are minor variations according to the situation and the financing goal. Some of the popularly used forms are: 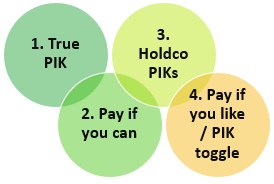 The obligation to pay interest (or a portion of the interest) in kind is compulsory and is predefined in terms of the debt. This is actually the plain vanilla kind of PIK.

The borrower (or issuer) is supposed to pay interest in cash if certain restricted payment criteria are met. If the prescribed conditions are not fulfilled due to situations such as senior debt restrictions preventing the borrower (or issuer) from gaining sufficient funds from its operating subsidiaries), then interest is payable in kind, usually at a rate higher than payment in cash. Although these PIK structures cannot avoid the prevailing restrictions or payment test, their compulsory cash-pay nature lowers the financial flexibility and liquidity for issuers.

Certain PIKs have the added risk of being issued at the holding company level, which means that they are “structurally” subordinated and depend solely on the residual stream of cash, if any, from the operating company to service them.

The borrower (or issuer) can exercise its discretion to pay interest for any given period in cash, in-kind, or in a combination of both of them.

PIK toggle notes were quite prevalent in leveraged capital structures before the financial crisis in 2008. When Leveraged Buyout (LBO) was at its peak in 2006, the PIK-toggle structure was the biggest innovation. Usually, the issuer is supposed to inform investors six months in advance before “flipping the switch.” These “PIK toggle” securities empower borrowers to make a choice. They can continue to pay interest on a bond, or they can defer the payment until the bond matures, and in the process, settle for an interest rate that is quite higher than the original rate. 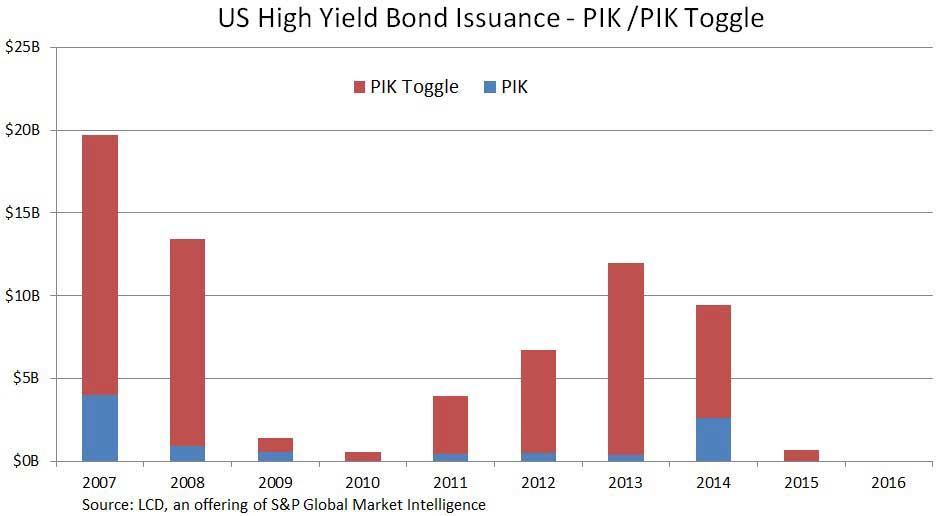 PIK-toggle note issuance reached about $12 billion in 2013 – the highest level since the credit crisis in 2008 – however it was just 4% of total supply, as compared to 14% in 2008. Most of them backed dividend with a few financing ones. Only one was LBO oriented. Though the U.S. high yield bond market came off from the risk-off period of late 2015/early 2016, that was only to an extent. There has been almost nominal or no PIK/PIK toggle issuance since the second quarter of 2015

Neiman Marcus pioneered the trend for PIK Toggle bonds way back in 2005 when it was first bought out by Warburg Pincus and Texas Pacific Group. It is believed that TPG was quite worried as to what would happen if the retailer Neiman Marcus had to weather sudden economic downturn or losses due to wrong corporate policies. It then dawned on them to design an unusual structure where some of the debt it put on Neiman Marcus would be utilized to finance the acquisition. If the retailer witnessed unexpected headwinds, it could stop paying cash interest on the $700 million in debt, and instead, pay back a higher sum when the bonds matured in 2015.

Some of the other instances of PIK Toggle were:

It was a deja-vu moment for Neiman Marcus when its new owners, Ares Management and Canadian Pension Plan Investment Fund, in October 2013, issued a US$600 million PIK toggle to partly-finance their US$6 billion buyouts.

Experts are divided on the opinion about the effectiveness or practicality of the PIK Toggle debt.

Advocates say that the high-interest rates attached to PIK toggle notes give borrowers a motivation to continue making interest payments unless any kind of financial pressure comes up.  However, on the other hand, S&P’s Leveraged Commentary & Data Group once opined that PIK toggle bonds have an underlying risk quotient because they have the potential to burden investors with more debt in financially-struggling companies and limited cash from them.

In leveraged buy-outs, a PIK loan is used if the purchase price of the target is more than the leverage levels up to which lenders agree to provide a senior loan, a second lien loan, or a mezzanine loan, or if there is the limited cash flow available to make payments of a loan (i. e. due to dividend or any merger-related restrictions). It is not provided to the target itself. Usually, it is the acquisition vehicle, another company, or a special purpose entity (SPE) that receives the loan.

As a practice, PIK loans in leveraged buy-outs carry a considerably higher interest and fee burden than the senior loans, second lien loans, or mezzanine loans of the same transaction. With yields higher than 20% per annum, the acquirer has to do a prudent assessment that the cost of taking a PIK loan should not exceed his internal rate of return of equity investment.

How is Payment in Kind beneficial to lenders or financiers?

Lenders structure their loans with a PIK interest component when they want to enhance the certainty of their investment return. For instance, when the lenders differ with equity research or portfolio management companies on the future value of equity, they may prefer receiving cash interest and Payment in Kind interest instead of cash interest and warrants to purchase equity. The value of a warrant, upon exit, becomes uncertain. Thus the contractually certain, compounded PIK return appears more appealing.

For a mezzanine or private equity investor, PIK is most often the most suitable strategy whenever one wants to “lock-in” an investment return. In fact, these lenders prefer the PIK feature because not only do they receive new security in the portfolio company without deploying any additional cash, but it results in a compounded interest effect, which in turn increases the overall investment return.

The position of PIK debt is usually after other debt in a financing structure, which has a cash pay interest option.  Servicing the debt with interest in kind rather than in cash comes at a premium – PIK interest is naturally higher than cash interest.  This is done to compensate lenders (or investors) for relinquishing their option to receive their cash-pay interest throughout the tenure of the debt. In fact, the lenders have to take on additional credit risk by increasing the amount of principal they are due to receive as the interest keeps accumulating. However, the interest is compounded annually, gives a compound return.

Despite all this, PIKs still have consistent demand, though lower than what it was prior to the credit crisis in 2008. One of the major reasons why lenders still willing to invest in PIK debt despite it being branded as a  high-risk debt is because the issuances did post-crisis have seen judicious and restraint in the usage of this debt by companies. It brings us to an important point that while there are many avenues for corporate financing, some of which, like PIK debts come with a unique mix of flexibility and risk, it is ultimately the borrower’s judgment in selecting the debt that counts.  Deferring cash interest payments may sound attractive but will the company be comfortable in the bond issuances, and the increased principal payment is something that calls for astute decision making.