What is Mortgage Fraud?

Mortgage Fraud is a willful misrepresentation or omission of facts such as an overstatement of an ability to repay the loan or any such material information, which lead the lenders of the loan to approve or relax the terms and conditions of the loan such as the interest rate or the repayment schedule. This fraud falls under criminal offense, and if found guilty, the fraudster can get imprisonment of up to 30 years. 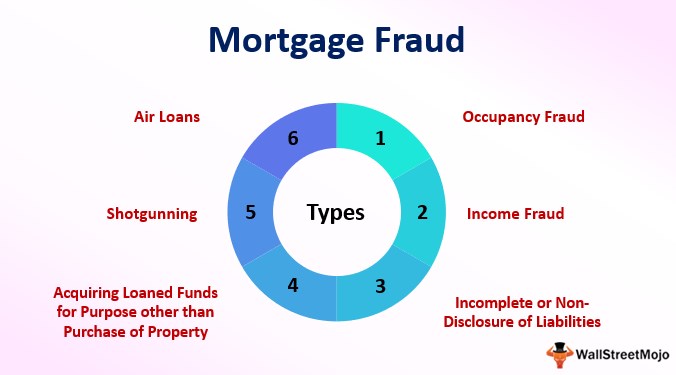 #3 – Incomplete or Non-Disclosure of Liabilities

This is the case when the buyer doesn’t give a complete picture of the liabilities that he is indebted by and secures a higher quantum of loaned funds or a lower interest rate due to a misrepresentation of the riskiness of the loan.

#4 – Acquiring Loaned Funds for Purpose other than Purchase of Property

This involves frauds conducted by a financial intermediary where they borrow funds for a property that actually doesn’t exist at all. In such a case, these intermediaries falsify proofs of the existence of such properties and borrow funds without actually providing any collateral. The lender being unaware of sanctions the loan and later faces the issue of not being able to recover the same by selling the collateral in case of a default because the collateral doesn’t exist.

On November 4rth, 2019, the US department of justice sentenced Manuel Herrera & Moctezuma Tovar for wire fraud and mortgage fraud along with several other defendants. In this case, the defendants, who worked for a company called Delta Homes & Lending Inc. created false loan documents and homebuyers to secure loaned funds. They overstated the incomes liabilities employment, and citizenship of these home buyers to secure funds and provided them money so that their balance sheet looked better than it actually was. Once the funds were secured in the name of these homebuyers, it was returned to Herrera and Tovar and their accomplices.

In this process, the lenders lost $4 million. As of now, the final decision is pending but the penalty can extend up to 20 years of imprisonment and $250,000 fine per defendant.

How to Prevent Mortgage Fraud?

This has been a guide to What is Mortgage Fraud & its Definition. Here we discuss the top 5 types of mortgage fraud and categories along with examples, indications, and how to prevent it. You can learn more about from the following articles –