What is Tag-Along Rights?

These are most common in the case of private equity or venture capital domains. These organizations raise initial funds from angel investors or private investors for proving the feasibility of their ideas, and once this is established or some other milestone is reached, the owners of the company like to exit from the company by selling it to a bigger company or by going public, etc.

In these cases, the owners may have ample contact in the industry; however, the investors may not, and the owners may understand the industry much better as they are part of the day to day working. Therefore, so that they don’t misuse this edge they have over other investors, they are bound by tag-along rights, in which the investors’ shares are also sold along with the owner’s shares. 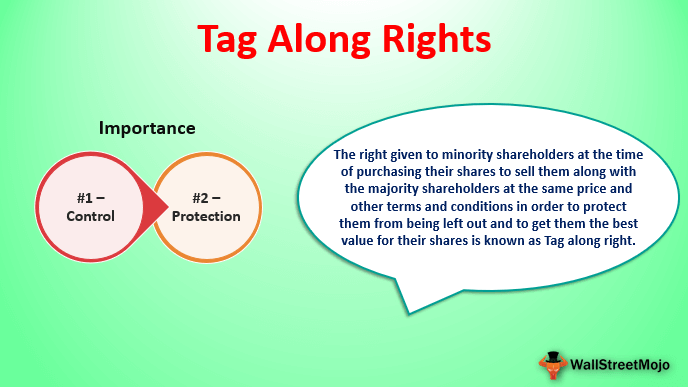 These rights are beneficial mostly to the minority shareholders and the investors who don’t participate in the day to day functioning of the company; therefore, they are important from their point of view because of the following reasons:

These rights give the minority shareholder some degree of control for the management of their holdings because these give them the right but not the obligation. These obligate the majority shareholders to fulfill the contract.

These protect the investors in two ways, they don’t let the owners leave the minority shareholders in dire situations and binds them; therefore, it doesn’t allow them to just sell their share and exit from the investment, they have to sell the minority stake also. Further, it is possible that if these rights are not present, the minority shareholders may have to settle for lower prices or may not get the due value of their investment. These rights ensure that such a situation doesn’t arise.

As per the Shareholder Agreement between North Shore holdings limited and its Shareholders, dated Dec 3, 2015, which can be found in the SEC filings, if any shareholder initiates the transfer of share procedure with any third party purchaser, he is supposed to circulate a notice to all other Tag along shareholders stating the following details:

Once the shareholders receive the notice of a transfer being taking place and don’t send the notice of their intent, they are assumed to have waived their rights. Then the selling shareholder can execute the sale without their approval.

The company first bears the fees and expenses up to the set limits. Any amount over the same is to be shared by all the participating shareholders in the ratio of their participation.

The fillings to the SEC are in great detail and can be observed from their website; however, core points are as mentioned above.

It is not always beneficial for the investors or the company to have a tag-along clause. The following are some mistakes that are very frequent:

In certain companies, no single shareholder or a group holds 51% or a clear majority of shares, and therefore, where it is not clear what is considered as the majority, the application of tag-along right may become doubtful. It may not kick in when they should; therefore, it is always advisable to mention the precise definition of the majority. At times having 30% shares may also become a majority. And further, these terms should be continuously monitored in the light of a change in shareholding pattern.

Tag along vs. Drag along with Clauses

There may not always be a consensus in the view of all the shareholders, and therefore, the majority has greater voting right. However, if the investor is getting into such an agreement, they ensure that they pay lower prices at the time of purchase of such a share because it gives them a lesser say. Therefore the price of a share with the tag-along clause will be higher than that with the drag along with clause.

These rights are a common practice and, therefore, very prevalent in the shareholder agreements with the company and the majority shareholder. At times they are known as the ‘co-sale’ agreements also. They aim to protect the minority from unethical practices of the majority and fetch them the best price for their share. Still, at times, they may become problematic and dissuade prospective buyers from entering into a deal.

This article has been a guide to what is tag-along rights and its definition. Here we discuss an example, importance, and common mistakes of the tag-along clause with its advantages and disadvantages. You can learn more about financing from the following articles –