The world’s largest accounting scandal is of Enron, once one of the largest companies in the world, which faked their accounting statements by using the mark to market strategies and it took down Arthur Andersen with it (which is now Accenture)

In this article, we will talk about the list of the top 10 accounting scandals of all time and how these companies manipulated their financial statements. 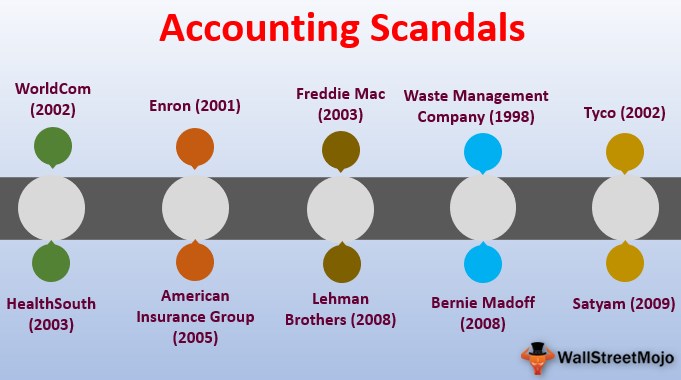 Let’s discuss each one of them in detail – 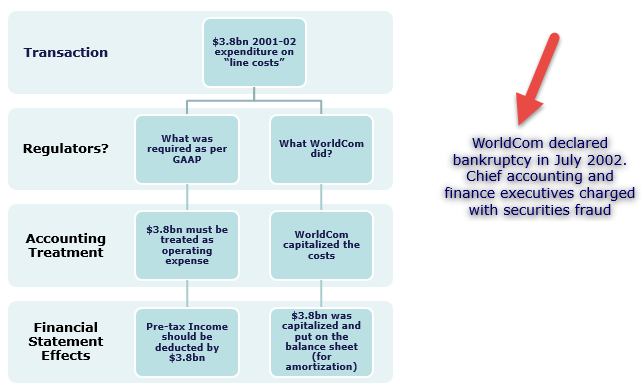 This accounting scandal occurred in the year 2002. WorldCom was a telecommunication company. The name of WorldCom has not changed; it is MCI, Inc. now. The fraud happened due to the inflated assets of the company. Then CEO, Bernie Ebbers didn’t report the line costs by capitalizing, and he also inflated the revenues of the company by recording fake entries. As a result, 30,000 people lost their jobs, and investors lost around $180 billion. The internal audit team of WorldCom found out $3.8 billion fraud. After the fraud was discovered, WorldCom filed for bankruptcy, and Ebbers got a sentence of 25 years. 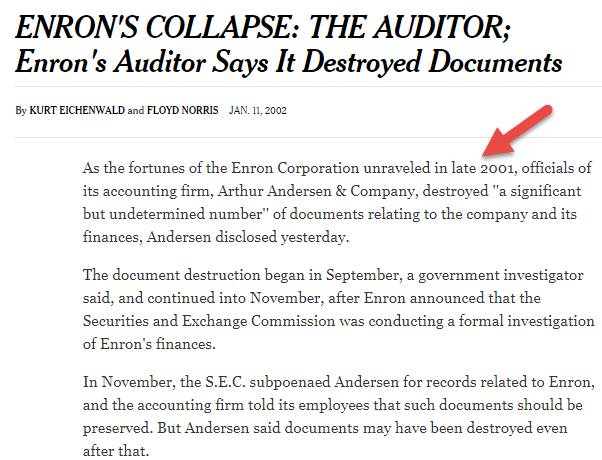 This accounting scandal happened in the year 2001. Enron, a commodity and energy-based service company, was in trouble for removing a massive amount of debt from its balance sheet. As a result, the shareholders of Enron lost $74 billion. Many employees lost their jobs. Many investors and employees lost their retirement savings. It is one of the most cited accounting scandals of all time. It was the work of then CEO Jeff Skilling and former CEO Ken Lay. Ken Lay died even before serving time. Jeff Skilling was imprisoned for 24 years. Enron filed for bankruptcy, and it was found that Arthur Anderson was also guilty of falsifying Enron’s accounts. Sherron Watkins had acted as an internal whistleblower. And the suspicions increased as Enron’s stock price increased. 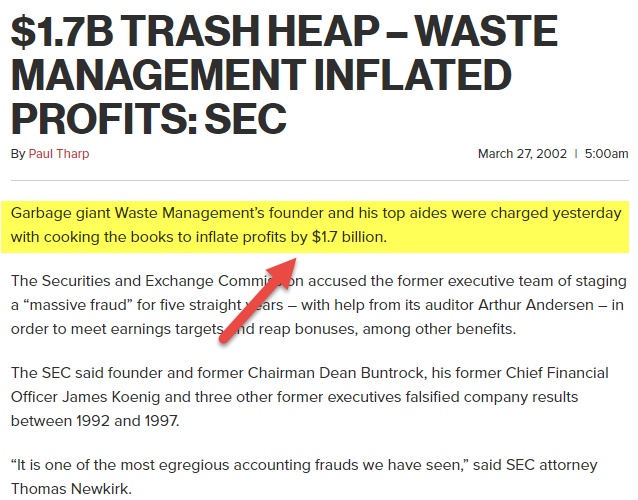 This accounting scandal happened in the year 1998. Waste management company reported around $1.7 billion in fake earnings. They deliberately increased the time period of depreciation of their plant, equipment, and property. While the new CEO, A. Maurice Meyers, and his team members went through the books of accounts, they found out this unprecedented scenario. Arthur Anderson has to pay $7 million as a penalty to the Securities and Exchange Commission (SEC), and the shareholder class-action suit settled for $457 million. After all, was settled, the CEO, A. Maurice Meyers, started an anonymous hotline so that the employees could spread the word about any dishonest or improper matter happening in the organization. 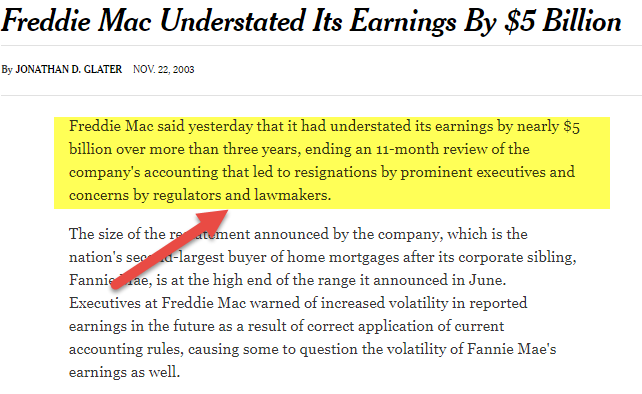 This accounting scandal occurred in the year 2003. It was a mortgage finance giant, and it had massive backing from the Federal Reserve. The scandal was enormous. The earnings of $5 billion were intentionally understated. The whole plan was executed by the CEO, COO, and ex-CFO of the company. While investigating, SEC found out the fraud. Freddie Mac needed to pay $125 million in fines, and CEO, COO, and ex-CFO were fired from the company. The most surprising thing is after a year, another federally backed mortgage finance company was caught in a similar sort of scandal. 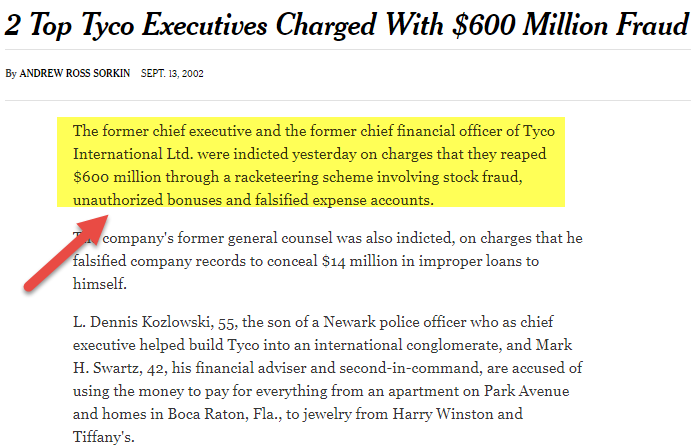 This accounting scandal occurred in the year 2002. Tyco was a Swiss security systems company. The CEO and CFO inflated the company income by $500 million so that they could steal $150 million. They did this through fraudulent stock sales and unapproved loans. Securities and Exchange Commission (SEC) and Manhattan D.A. found out questionable practices in accounting, and that’s how the whole thing got attention. The CEO and CFO got a sentence of 8 to 25 years, and Tyco had to pay $2.92 billion to investors as a result of the lawsuit.

This accounting scandal happened in the year 2003. It was the largest publicly traded healthcare by then. The income was inflated by a whopping $1.4 billion so that they could meet the expectations of the shareholders. The main culprit behind this accounting scandal was the CEO, Richard Scrushy. It was found out by SEC when the company sold $75 million of shares in a single day after a huge loss. The penalty was 7-year imprisonment. The fascinating thing about Richard Scrushy is that he now works as a motivational speaker! 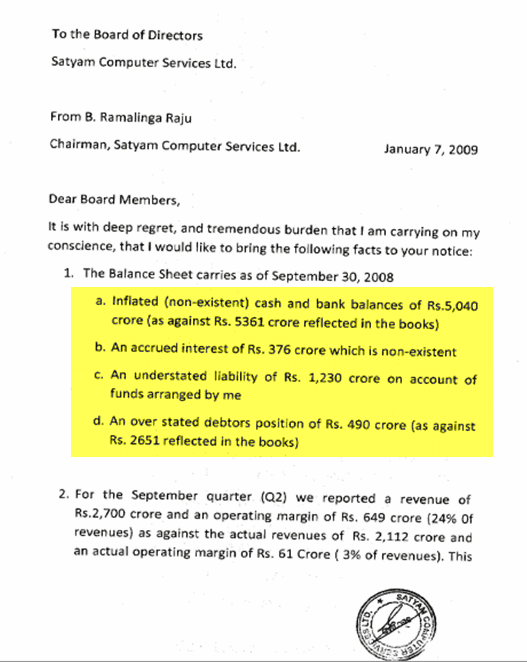 This accounting scandal occurred in the year 2009. It was an Indian IT and back-office accounting services firm. The fraud was of a huge $1.5 billion. The Founder & Chairman of the company, Ramalinga Raju, was the main player behind this fraud. He inflated the revenue and reported the same in his letter to the board of directors. CBI couldn’t file charges on time, and he was not charged. A hilarious part is that in the year 2011, his wife published his book on poetry on existentialism. 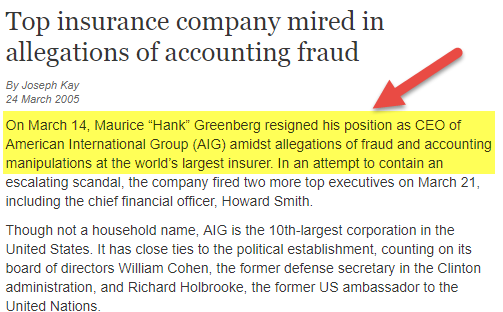 This accounting scandal occurred in the year 2005. As the name suggests, the American Insurance Group was a multinational insurance company. The fraud was massive. The fraud was about $3.9 billion. The complaints were that this huge sum of money was alleged, and there was also manipulation of the stock price and bid-rigging. The person responsible for the fraud was the CEO, Hank Greenberg. It was not exactly known how SEC found out, but possibly a whistleblower hinted it to SEC. The CEO was fired, and AIG had to pay $10 million to SEC in the year 2003 and $1.64 billion in the year 2006. 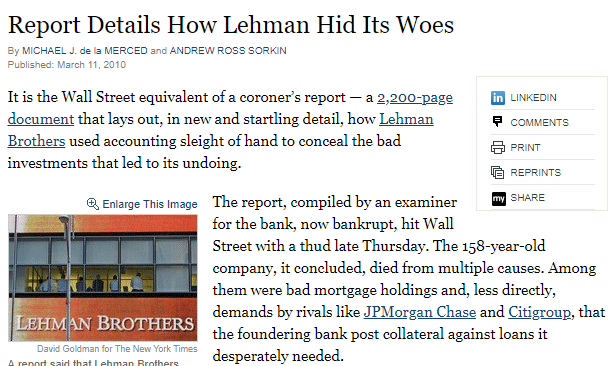 This accounting scandal happened in the year 2008. It was another most cited scandal in the history of accounting frauds. Lehman Brothers was a global financial service provider. The actual fraud was done by hiding the losses of around $50 billion as sales. When the company went bankrupt, the actual scenario got public. The key players were the executives of Lehman Brothers and also the auditors of Ernst & Young. They sold toxic assets to Cayman Islands banks to showcase that they had $50 billion more in cash. SEC couldn’t prosecute them due to a lack of evidence.

This accounting scandal happened in the year 2008. It was a Wall Street investment firm. The fraud was one of the largest frauds in the history of accounting frauds. They tricked the investors out of $64.8 billion via the most prodigious Ponzi scheme ever. The main players were Bernie Madoff himself, his accountant, David Friehling, and Frank DiPascalli. The whole issue was the investors were paid out of their own money or from the money of other investors and not from the company’s profits. The funny thing is Madoff got caught after he told his sons about the scheme and they informed the SEC about the same. Madoff was sentenced for 150+ years of prison and $170 billion restitution. His partners also got imprisonment.

This has been a guide to the top 10 worst accounting scandals list of all times. This accounting scandal list includes Worldcom, Enron, Waste Management Inc, Freddie Mae, Tyco, HealthSouth, Satyam, Lehman Brothers, AIG, and Bernie Madoff. You may also have a look at the following articles to learn more about Financial Analysis