What is Aggregate Demand (AD)?

Aggregate Demand is the overall total demand of all the goods and the services in the country’s economy and is expressed as a total amount of the money which is exchanged for such goods and services. It equals the demand for the Gross Domestic Product (GDP) of the country and describes the relationship between all the things which are bought within the country with their prices.

The aggregate demand is calculated using the different components which include Consumer spending, Government spending, investment spending, and the net exports of the country.

The difference between exports (X) and imports (M) is also referred to as net exports.

Example of the Aggregate Demand 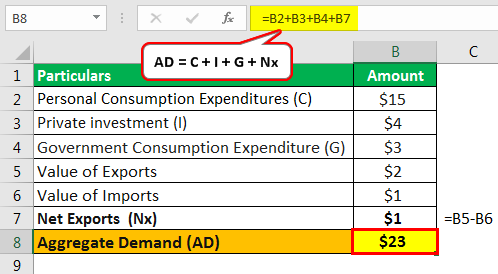 An Economist is comparing the aggregate demand of two economies – Economy A and Economy B. He gets the following data:

Calculate and find out which economy has a higher aggregate demand. 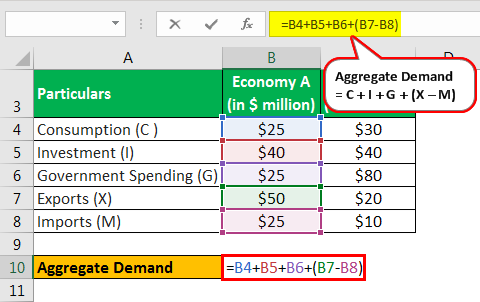 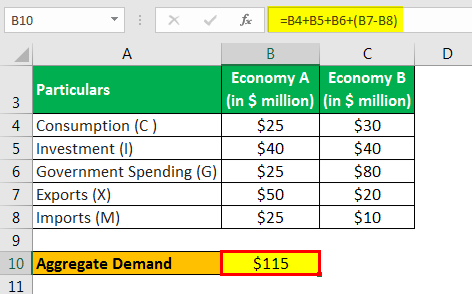 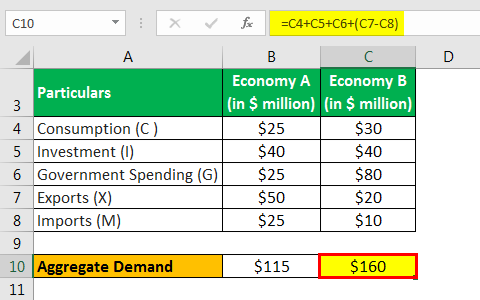 Aggregate demand for Economy A is $115 million and that of Economy B is $160 million.

Therefore, the size of Economy B is higher.

Aggregate Demand is the overall total demand for all the goods and the services in the country’s economy. It is a macroeconomic term that describes the relationship between all the things which are bought within the country with their prices.

Like the AD in a country is measured by the market values, so it represents only the total output at a given price level which may not necessarily represent the quality of the things or the standard of living of the people of the country.  It is computed by adding expenditure on the goods and services purchased by the consumers, investment, spending by the government, and the net exports of the country.

This has been a Guide to Aggregate Demand and its definition. Here we discuss how to calculate aggregate demand using its formula along with practical examples. You can learn more about accounting from the following articles –