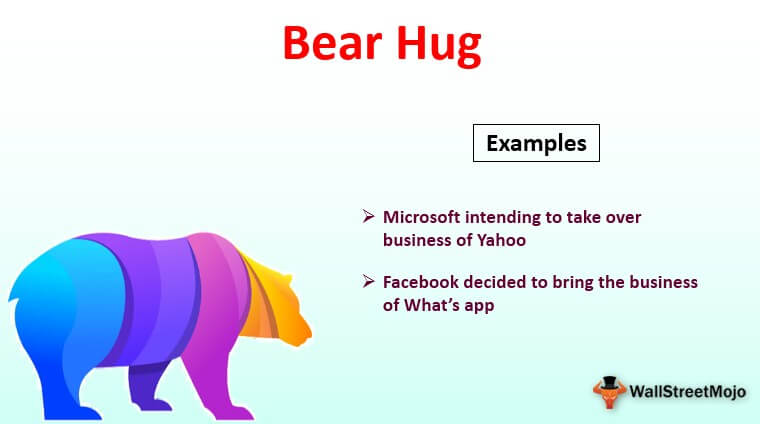 One example of bear hug acquisition was the case of Microsoft intending to take over the business of Yahoo, where Microsoft offered Yahoo to buy its shares at a 63% acquisition premium than what it closed the earlier day. This looked really beneficial for the shareholders as at that point in time, Yahoo was really struggling, and their business was making huge losses.

The acquisition of Whatsapp messenger services by US Tech giant Facebook. Facebook decided to bring the business of Whatsapp under its umbrella and made a lucrative offer to Whatsapp, which was hard to be refused. Thus within months of management talks, Whatsapp finally decided to get acquired by Facebook and continue its business under the ownership of Facebook.

Companies use this takeover strategy due to the following reasons: 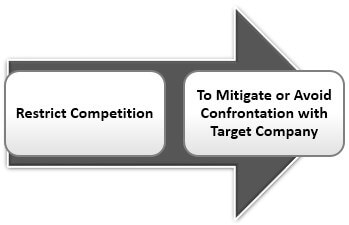 When a company announces its willingness to get acquired, there will be multiple buyers interested in it. Thus they come beneficial in beating the competition where the target company is bound to get acquired because of the price it gets offered, which is much higher than the market rate.

#2 – To Mitigate or Avoid Confrontation with Target Company

Companies may go for this strategy when the target company is skeptical or reluctant to accept the offer for getting acquired. Thus, the alternative approach to getting the shareholder’s nod is to go for a bear hug where the acquiring company offers a price that is too hard to be refused.

Bear hug takeover is very beneficial to the shareholders of the acquired company or the target company because they get a better valuation of their share prices where the target company’s shares are acquired by the acquiring company at a much higher rate than what is prevailing in the market.

This article has been a guide to Bear Hug and its meaning. Here we discuss examples of bear hugs with their reasons, failure, and working. You may refer to the following articles to learn more about finance.