Greenmail is an intentional purchase of a substantial number of shares in an entity with an ultimate objective to threaten it with a hostile takeover, which usually results in forcing the owners to repurchase the shares at a premium.

The target firm is actually forced to buy its stock at an increased price to ward off a corporate raider. It is a blackmail that gives the corporate raider a good profit by just creating a takeover threat. In the case of mergers and acquisitions, this payment is made to put a stop on the takeover bid. 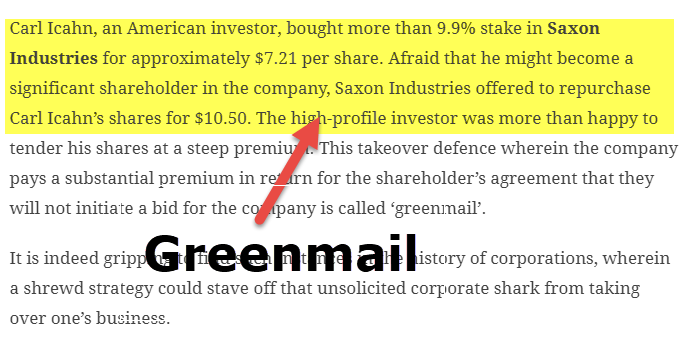 Greenmail – “BLACKMAIL of a DIFFERENT COLOR”

How does Greenmail work? 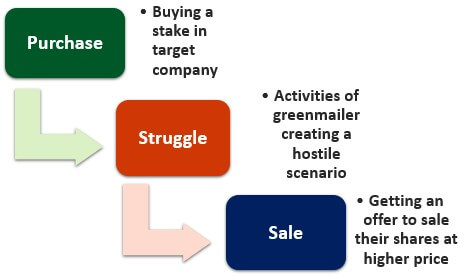 Let us have a look at the process, followed with the help of a diagram.

Effective Measures by the Target Company

During these situations, the target companies have two options.

Suppose a company X buys 30% shares of company Y and then threatens X for a takeover. The management of company Y decides to buy back the shares at a premium price to avoid the takeover bid. After this greenmail, company X makes a considerable amount of profit from the resale of shares at the premium price. Still, company Y makes a significant loss and is left with additional debt.

Although there is still the existence of greenmail in various forms, the state has implemented regulations that make it quite difficult for companies who plan to repurchase shares from short-term investors above the market price. In the year 1987, the Internal Revenue Service (IRS) introduced an excise tax of 505 on the profits made from greenmail. Additionally, the companies also have incorporated different defense mechanisms known as poison pills to keep such investors at bay from threatening hostile takeovers. It does not always mean hostile takeover bids, but many times it may lead to the proxy contest, which eventually can affect the management and operations of the company.

It is similar to blackmail, where threats are made to establish a benefit and gain profit. This money is paid to another company to stop the aggressive behavior.

This article has been a guide to what is Greenmail. Here we discuss how greenmail works along with practical examples and effective measures the target company can take in such a situation. You may learn more about M&A from the following articles –