What is Initial Public Offering (IPO)?

Initial Public Offering (IPO) is the process in which the shares of the private companies are listed for the first time in the stock exchange for allowing trading of its shares to the public and this allows the private company to raise the capital for different investments.

Let’s take an example to understand this.

The purpose is to create funds by selling the company’s shares to the public. It’s the best way out to those who don’t want to go for long term loans. 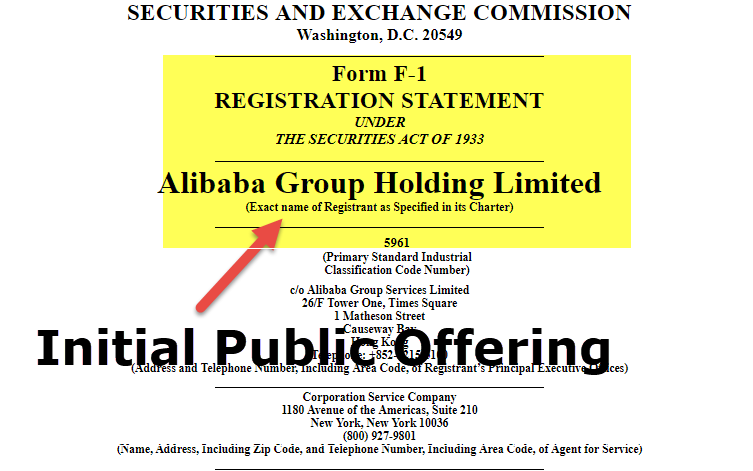 An Initial Public Offering is not only an indication that a private company needs more capital to fuel its growth; it’s also a symbol that the business has made its mark on the world map.

Not all businesses go for capital raising. Only a few who feel that they are competitive enough to go big only go for initial public offering. But IPO is not all a bed of roses. With the recent Sarbanes-Oxley Act, IPO has become an arduous process that not only costs the business more money; but also more regulatory requirements, which very few companies can crack.

Having said that, there are the following steps you need to take if you would like to take your private company to the public – 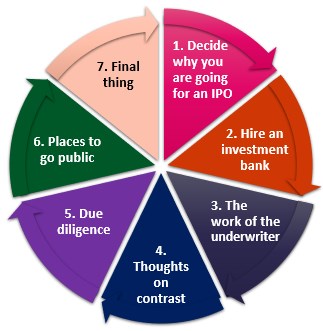 #1 – Decide why you are going for an IPO

Once you have clarity on why it is an essential option, the next step is to find out an investment bank that can work as an underwriter for your IPO process. This step is critical. Because there is a lot that depends on the investment bank. So before selecting the bank, choose whether the bank has any previous record of conducting an IPO. Having experience in conducting IPO will take away a lot of burden from your shoulder.

#3 – The work of the underwriter

Once the investment bank is hired, it acts as an underwriter. The underwriter decides the value of the company and how much investors are willing to pay for shares in the company. After that, the offering is planned out, and at a pre-decided price company’s shares hit the stock market. Then the individual investors will purchase shares, and the company will get news funds. The entire transaction is first funded by the investment bank so that the company has enough funds before the Initial Public Offering.

The IPO process usually takes months to complete. And in some cases, it is not always successful. Who will need to bear the cost then? The sad part is even if the IPO becomes unsuccessful, the cost has to be borne by the company, and it usually costs them around $300,000 to $500,000. The cost needs to be incurred for printing, legal matters, and accounting fees, etc.

If you want to make your Initial Public Offering successful, first go in the market and find out whether your idea of expansion or diversification is a great idea. Ask your customers. Find out from the competitors. Primary research is much more important than secondary research. So invest first in primary research and record your findings. Then compare the findings with secondary research and see whether you can see any trend. If yes, follow along. If not, go deep and find out more. Due diligence is critical for your IPO because it will ultimately decide whether the Initial Public Offering would be successful or not.

After all this preparation, it’s time to know where you will go public, i.e., stock exchanges. There are a few options for you. First is, of course, NYSE (New York Stock Exchange). There is also an AMEX (American Stock Exchange). You can choose NASDAQ (National Association of Securities Dealers Automated Quotations) as well. Other options are OTCBB (Over the Counter Bulletin Board) and Pink Sheets. Depending on the need of the hour, you can choose what stock exchange will suit you. For example, many start-up companies choose Over the Counter Bulletin Board and the Pink Sheets because there is no requirement for asset or revenue. As they grow in revenue and asset, they grow up the ladder and choose higher rung.

While going for an IPO process, there is one thing most companies neglect, i.e., running their businesses. An Initial Public Offering is a very time-consuming thing that takes up all of the time, and as a result, the main thing gets ignored. So, chalking out a plan to run your business effectively while you hustle for IPO is an essential thing. Otherwise, during the process, you may lose out a decent portion of the revenue.

Factors to be considered before going for IPO

There are a few factors that you need to consider before going into an IPO Process. All of these factors are important if you want to make your IPO a successful one.

Example of the IPO Process

We can pick up any great company and tear the facts up to see what worked for them and what didn’t. Let’s take Facebook and dive in.

Initial Public Offering isn’t for all companies. And not all offerings are successful. There are many instances where IPOs failed or didn’t do that well as expected. As big companies are captured by media, and they already have funds to run a successful Initial Public Offering, hire a great underwriter and, as a result, ensure a smooth flow of issuing of shares. So we know that they are successful, and we seem to believe all are successful. But the truth is darker than it seems. For example, if you look at the statistics of Apigee Corporation, Bellerophon Therapeutics LLC, Zosano Pharma Corporation, MaxPoint Interactive Inc., etc. you would see that the list of failed IPOs is much longer than it seems.

This has been a guide to what is Initial Public Offering or IPO. Here we discuss how it works and which factors you need to consider before conducting an IPO process. You may learn more about Investment Banking from the following articles –