Technically speaking, venture capital is just a subset of private equity. Both invest in companies, both recruit former Investment Bankers, and they both make money from investments rather than advisory fees. But if you take a closer look at them, you’ll see that they’re significantly different.

The term “private equity” generally refers to money invested in private companies. Such companies become private through investment. Most people in finance, though, use “private equity” to mean firms that buy companies through leveraged buyouts (LBOs) – so that’s how we’ll use it here.

Many of you might be curious as to what exactly they do and what makes them different from one another. So let’s get started and find the answers. In this article, we discuss the following –

The image that you see below will help you understand what Private equity is. 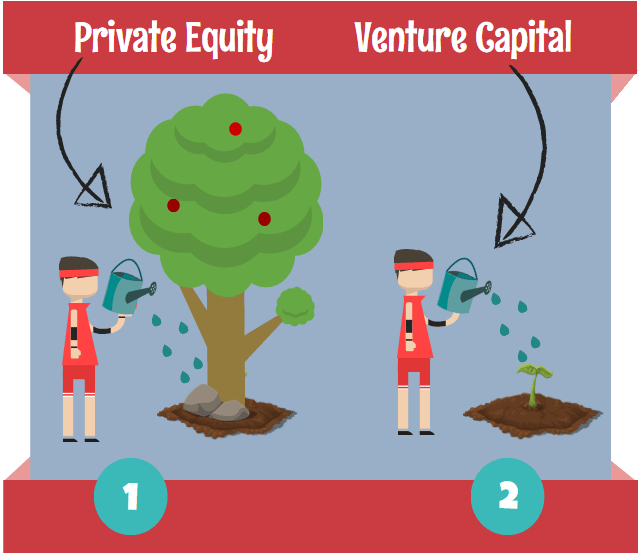 Let’s consider that you are the one who is watering that big tree. Your vision has helped you to choose this one tree from the garden, which you think can bear more fruits once it is nourished with fertilizers and good care.

You have collected the money (for fertilizers) from your friends and family who also intend to eat the sweet fruits of the tree afterward. With the intention that the tree will bear more fruits, you are watering it regularly.

Now connect this example with what happens in Private Equity.

Let’s take the same example to understand what is Venture Capital.

Assume that everything remains the same as the previous analogy that we saw with respect to the above image. The only difference is:

Here the risk can be high, but so are the expected returns.

PE firms and VCs invest in companies and make money by exiting, i.e., generally selling their investments. But the way they do it is different.

“So which model actually produces higher returns?” is the basic question that can arise in your mind.

Most of the differences that we have seen are specifically dealing with the theory part of Private Equity and Venture Capital firms.

Now we are going to focus on specific differences between the two, which will help you to determine:

The main point of similarities involved in the interview process is that “Both types of firms focus on your background and deal experience”. But that is it. This is the only similarity.

Which One Should You Choose?

So, private equity vs. venture capital, what are you up for?