What is Refinancing Risk?

Refinancing Risk refers to the risk arising out of the inability of the individual or an organization to refinance its existing debt due to redemption with new debt. Refinancing risk carries the risk of the failure of the business to roll over its debt obligation and, as such, also known as rollover risk.

How Does Refinancing Risk Affect Banks?

Refinancing risk can also take the form of the ability of the bank or financial institution to refinance the matured liabilities but at very high interest, which adversely impacts its income profile, which is measured through the net interest income earned by the bank.

Naturally, banks raise funds which are usually short term in nature in the form of Term Deposits, Demand Deposits (ranges typically from a day to a period of 5 years and so on) and finance assets in the form of loans (which can extend up to 30 years) which are usually long term in nature and that inherently creates a mismatch in the asset-liability profile of the bank.

In a rising interest scenario or, at worst, in a liquidity crunch market when it becomes difficult for banks/financial institutions to raise funds to refinance the matured liabilities, it gives rise to refinancing risk. 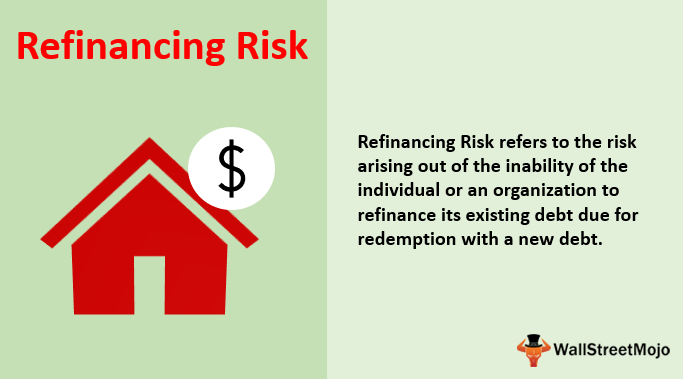 Let’s understand rollover risk with the help of a few hypothetical examples:

Laurel International is a conglomerate group with a business interest in real estate. The company is basically into the construction of turnkey projects with a long gestation period. It requires funding for the long term, which it borrows using short-term debt and roll over the same with another short-term debt to keep meeting its requirement. The following schedule of obligations is mentioned below:

Federal Group is an infrastructure company that issued convertible bonds three years back, amounting to $10 Mio to fund its infrastructure project, which will complete in 10 years. The company raised the finds three years ago at libor+ 3% and rolled over the debt whenever the same becomes due at the same rate to avoid any cost overrun on account of increased interest. Recently due to the market downturn and liquidity crunch, the federal group is unable to refinance the short-term debt to make payment to the short-term debt and which led to a default on the part of the national group. The company was unable to raise finance, resulting in a complete standstill of its operations and severe liquidity shortages leading to bankruptcy and closure.

Although the risk of any kind ideally does not carry any advantage, however, certain benefits of keeping refinancing risk offer to the banks/financial institutions and individuals:

Rollover risk can affect the survival of the business and suffers from various disadvantages:

Refinancing risk is a common phenomenon in banks and financial institutions. Banks regularly take this risk to fund long-term assets such as infrastructure projects, home loans, etc. This risk is managed by specialized functions known as the asset-liability management (ALM) department in every bank and Financial Institution. Despite the potential disadvantages this risk brings for the business, banks accept this risk because it is impossible to fund long-term assets with long-term liabilities. A sustainable solution lies in understanding the risk in detail and deciding how much to accept and how much to transfer or mitigate through better maturity profile mapping of short-term assets and long-term liabilities.

This has been a guide to what is refinancing risk, and it’s a definition. Here we discuss examples of rollover risk along with advantages and disadvantages. You can learn more about financing from the following articles –