A conglomerate can be defined as a company or corporation that is made up of different businesses that operate in various industries or sectors that are often unrelated. Thus it holds a stake in these various smaller companies that choose to conduct or manage their business separately and is predominantly done so to avoid the risk of being in a single market and thereby take advantage of diversification.

The below image is an example of a conglomerate – ITC Ltd (based in India). It has various unrelated business divisions, including FMCG, Hotels, Paper & Packaging, Agribusiness, etc. 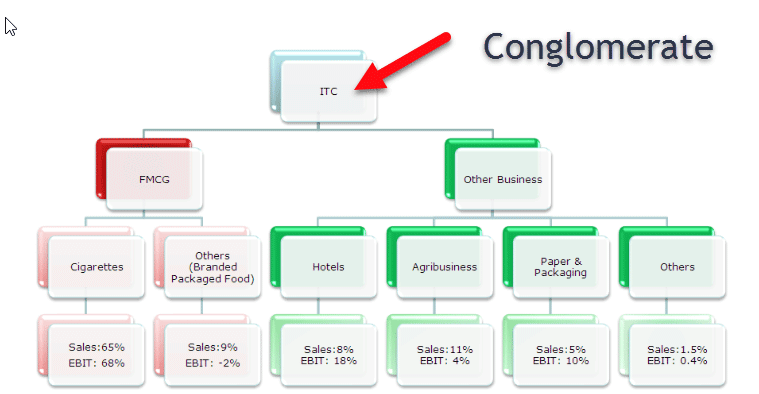 The term inorganic growth refers to expansion by a corporation by taking over other companies. A well-known name that comes to our mind when we think of a major conglomerate is Berkshire Hathway, which is run by Warren Buffet.

Given below is a snapshot of some of the holdings. 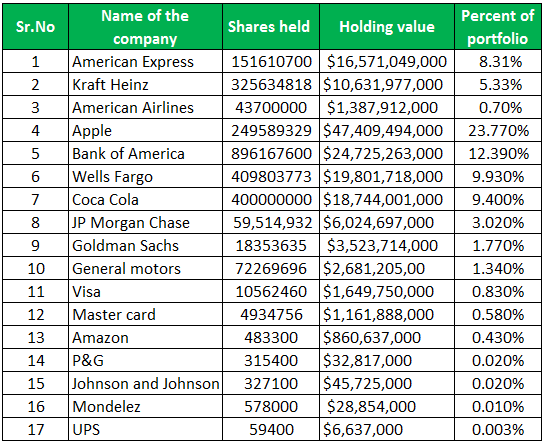 Thus Berkshire Hathaway stands as a classic example that merely holds businesses yet allows them to run on their own.

By inorganic growth, the corporation is able to achieve the benefits of diversification.

Organic growth is when a company tends to grow itself on its own capabilities, rather than having to rely on acquisitions of other businesses. A prominent conglomerate in this regard is Alphabet Inc, which took its form owing to restructuring being done at Google. It then became the parent company of Google and several of its subsidiaries.

Google, on its own, had phenomenal growth and diversification into various products, as listed below.

Alphabet Inc, which now went on to be the parent of Google given the organic growth of Google, will now be considered a conglomerate with some of the subsidiaries listed as below.

A household name in India is that of the Tata Group. Tata Sons Ltd is the holding company of the Tata group. Some of the subsidiaries and joint ventures of the Tata group, which give the company, the stature of a conglomerate, are listed as under.

One common method of bringing another company to that under its control is the known method of mergers and acquisitions. Gradual acquisition of several companies in the unrelated business is how a conglomerate goes on to build its foothold.

Goodwill is what is going to be recorded in the books of the acquirer as an intangible asset over and above of what is paid as the purchase consideration. A buyer may be willing to pay extra to a target, perhaps because of consolidation benefits, synergy benefits, or to acquire a certain resource or, in some cases, to even satisfy the shareholders.

Given below is a case wherein Pacman Co. is willing to acquire Cookies Co. The following are their balance sheets. 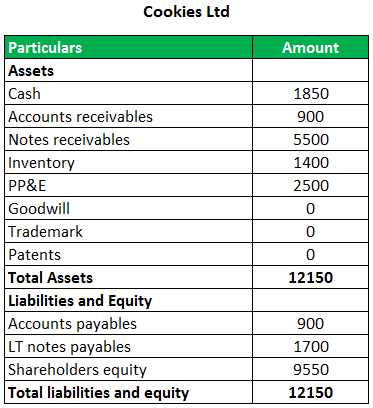 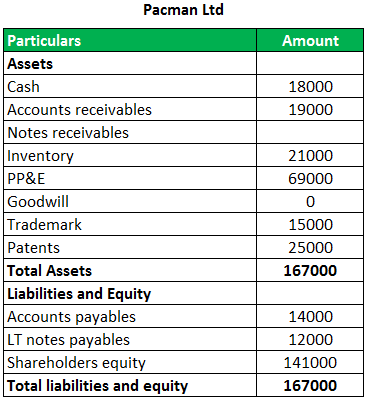 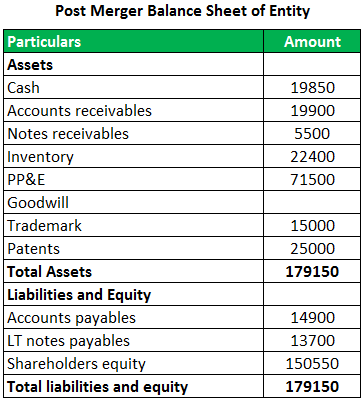 Thus given above is an example of having to display the consolidated balance sheet of the entity post the acquisition.

If we were to consider a scenario wherein the fair value of the Cookies Co would be arrived to consider the goodwill, after taking into the account the purchase consideration that Packman Co is willing to pay, which, in our example, is assumed to be 15000, the goodwill will then be the difference of purchase price and fair value.

This goodwill gets reflected in the balance sheet of the acquirer as an intangible asset, and this is how a conglomerate builds its foothold once it has undertaken sufficient mergers and acquisitions. (Treatment of goodwill is altogether a separate topic in the domain of M&A)

Thus when a company decides that it needs to expand and diversify into unrelated business areas without having to predominantly involve itself in the management of the same, seeking to be a conglomerate is one of the viable options for companies today, as demonstrated in the examples.

By doing so, it can enhance its value and seek diversification with minimum involvement in the day to day affairs and management of the company, and thus being a conglomerate stands an excellent strategy for diversification.

This has been a guide to what are Conglomerates and its meaning. Here we discuss top examples of conglomerate along with a detailed explanation. You can learn more about Financing from the following articles –