What is the Shareholder Letter?

A standard letter contains the following topics or headings –

In this section, the management describes the company’s affairs, its goals, mission, and the principles that the company follows along with a brief welcome note to the readers.

This section is about highlighting the financial results of the company during the year. The performance of the company is in terms of revenue and profits of the various branches or undertakings are reflected along with highlighting the reasons that lead to such performance. Apart from revenue and incomes, an overview can also be given with respect to other aspects such as loans, capital, and market share.

In this section, the management discusses the achievements met by the company during the year. It could include information with respect to the opening of new branches or business verticals, capturing market share, new investments, innovations, and inventions, partnerships, etc.

Here, the market conditions that were prevailing in the industry in which the company operates are described. The effect of such conditions, whether positive or negative, shall also be mentioned here.

In this section, investors get an update about the measures adopted by the company to improve its overall conditions. Also, the plans proposed for the upcoming years are discussed with their expected outcomes.

The letter ends with an acknowledgment note wherein the management concludes their thoughts and thank the investors as well as other stakeholders such as employees for their continued support. 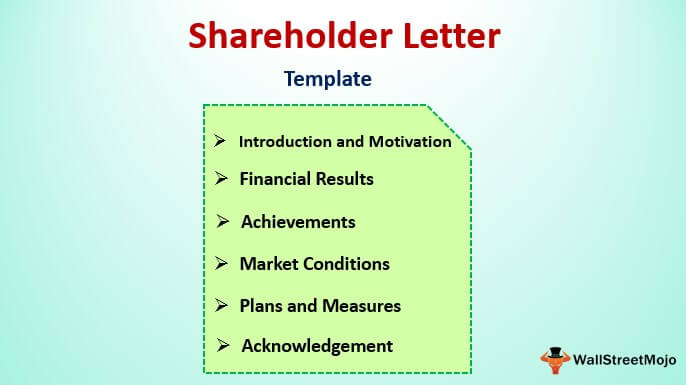 How to Write a Shareholder Letter?

Get in touch with the product heads, financial heads, and other top executives to get an idea about the star products and services, revenue, growth, profitability, projections, and plans, challenges faced, achievements met, and other relevant data. Frame the data in the form of notes.

Once you have gathered the relevant data and the notes, bifurcate them into relevant sections or headings. After sorting the data into headings, further formalize the data by way of paragraphs and pointers under each other so that a basic outline of the letter is ready.

After the outlining, formalize it and add a nice introduction as well as an acknowledgment of the letter. Highlight the information wherever necessary to gather attention to such areas. Carry out the proofreading of the document for assuring that the document is free from any kind of error.

Why do we Need a Shareholder Letter?

A shareholder letter is a vital document. Through this document, the management is able to communicate with its shareholders directly. By way of this document, the management gets a chance to give the shareholders an insight into what the company is up to, its financial results, the key achievements, challenges, and the actions taken, its upcoming events, and planning. Thus, the letter basically provides the information as to what the company has been up to, what it intends to do, and what the investors can look forward to if they stay with the company.

Following is a draft letter from a company named ABC Inc. which deals with motor cars:

I begin the letter with the utmost sense of pride for the company and its dedicated employees throughout the country and abroad. Keeping in mind the economic changes that the country is facing, I am happy to announce that the company has achieved excellent results not just financially but also in operational terms as we continue to add new clientage, audiences and expand throughout the globe.

In the year 2018-19, we continued to expand and were able to increase our revenues by 24%. Along with the increased revenues, the company was able to enhance its profits to $20 million, an increase in profits of about 18% as compared to last year. We intend to continue with a trend in the coming years also.

We enhanced our geographical presence by opening new branches at seven different locations. Also, we opened five new manufacturing plants during the year. We plan to add up locations abroad for operational efficiency and greater reach.

As you must be aware that the automobile industry suffered an all-time low this year. Thus, even we suffered and could not meet the expected target of increasing revenues, which was targeted by 35%. However, we managed to reduce the effect of industry stress and hailed through the same.

In the end, I would like to present my heartfelt gratitude towards the shareholders as well the employees for their continued support as well as confidence upon us.

There are some tips for writing a good shareholder letter –

This has been a guide to what is the Shareholder Letter. Here we discuss how to write a shareholder letter, why we need it, along with the template and example. You can learn more about financing from the following articles –