The Banking Industry is the backbone of the financial market with every economy. Below is the list of Top 6 Banking Books of All Time.

Let us discuss each of the banking books in detail, along with its key takeaways and reviews. 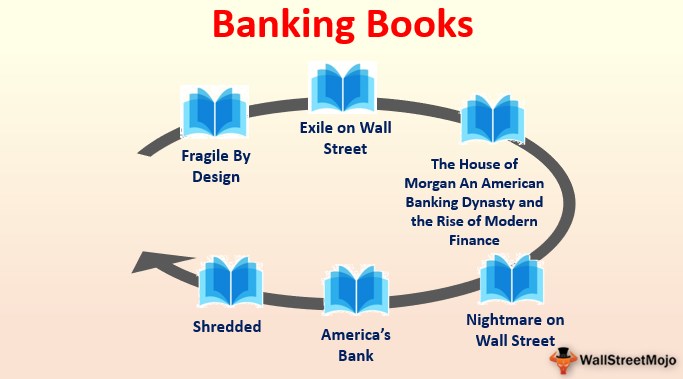 This book is related to the most aspiring history of American finance, which had been considered a disaster about 20 years or two decades back and is not considered a classic example for the rest of the globe. Starting from J.P. Morgan and covering the financial crises of the year 1987. It has been regarded as a masterpiece of the financial history by the national book awards of the 20th century as The 100 Best Nonfiction book of the 20th by the Modern Library ‘The House of Morgan’ as it is an extraordinary institution, and so are the men who ran the same.

These men include Franklin Roosevelt, Charles Lindbergh, Henry Ford, Winston Churchill, and Nancy Astor. The author explains the great men behind 150 years of success of this institution, its men, and historical events related to the same.

This book covers a fantastic history of the great men behind the successful history of J.P. Morgan as an institution. The author, with the help of this book, has brought together all the moments to life by creating anxiety of stress in this epic novel. He describes the life of these men at the bank, the institution’s history, along with the flow of the world finance history deeply.

The best take away from this book is the experience of the best men in the financial industry at work. Their experience includes their drawbacks or failures, along with their success stories. Success stories of successful individuals are great motivation. Each one of us must make them our idols to follow in their footsteps.

The author of this edition has very clearly put across the reason why some countries have a bad and unstable banking system, however, some are very stable with the same. For example, The USA had 12 banking crises in the year 1840, whereas Canada was absolutely stable. However, a few economies, such as Brazil and Mexico, have only been crises prone and increased their amounts of credits to business enterprises and households.

He has very closely monitored the banking history of countries of the United States of America, the United Kingdom, Brazil, Mexico, and Canada. He explains the difference between the accidents cause due to unforeseen circumstances and fluctuation results from a complex bargain. He explains the details of a well-started banking system and the control of the regulators on the same.

Banking crises and scarce credits are not accidents caused by unforeseen circumstances, and they are the after-effects of various bargains between bankers, politicians, shareholders of the bank, depositors, taxpayers, and debtors. A banking system can be fine only on the capability of the political institutions and to help the bankers maintain and limit the coalitions of different groups influencing the economy.

This book gives you a view of the entire financial system of an economy and how it has been dominated by various groups of people. The author confirms that the banking crises are rather avoidable than manageable.

#3 – Exile on Wall Street: One Analyst′s Fight to Save the Big Banks from Themselves

This edition is a must-read for audiences interested in business and finance, the future of banking, the root cause of the financial meltdown, and also US Capitalism. This book is an award-winning book with the details of one of the biggest financial and political crises of its time. This book covers 6 financial institutions and analyzing their banks, along with protesting against the same for their awful practices for the last two decades.

The Author has explained the practices that have been laid down to weaken the banking sector and capitalism. He uncovers the real inner working of big banks and also shows how it has affected Wall Street, which makes as bad as it was just before the last pre-crash. This book is definitely no textbook; however, still very informational for students wanting to pursue their career in the financial sector along with others in and interested in the same business.

This efficiently highlights the bad practices of the banking sector by the author, giving us an example of 6 big banks and institutions on Wall Street. He fights against the truth of power used in some large banks, highlighting his scars and his escape and survival of the challenging status to be credited by some of the few who saw the crises hitting the economy. He also highlights a few holes that still exist in the system. To sum it up, he also offers practical solutions

The entire history of the banking industry is narrated in this book. The author has very generously displayed the open loopholes of the crises that have still not been closed by the system leading us to another crisis. He has also offered us practical solutions to help the system get better and healthier.

#4 – Shredded: Inside RBS, the Bank That Broke Britain

From being one of the world’s biggest banks to trying to regain the trust of the public, Shredded has the entire story of RBS that is the Royal Bank of Scotland. One of the biggest banks in the UK, having assets worth $3 Trillion and also more than 200,000 employees globally, was a name causing antagonism and antipathy against the former CEO of the bank Fred Goodwin. The Big name Fred Goodwin is known as the architect of the worse financial crises since the last one in 1929.

The author uncovers appalling mistakes made, which got the bank to collapse. He also explains the role of the directors of the banks who could not check on the crimes created by Goodwin. Both the colleagues and politicians who overlooked his happenings which kept the bank unsupervised. The toxic of his misconduct shattered rather closed or shut down a number of small businesses and also harmed the big ones badly.

This book is an amazing example of a toxic individual who, with the help of his misconduct, had the ability to evolve the most horrible crises. The breakdown of The Royal Bank of Scotland actually destroyed a number of little businesses and also hit the big ones majorly. The author has shown the inefficiency of RBS employees, directors, and politicians who were unable to uncover the same leading to a financial disaster, for the same could have been controlled.

The author here confirms that the higher the designation, the higher are the responsibilities you bare. This book confirms that if the directors and the politicians kept a close watch on the movement of the bank and the happenings in it, they could have had prevented this fraud and saved the livings of many little businesses.

#5 – America’s Bank: The Epic Struggle to Create the Federal Reserve

The edition displays the birth of America’s Modern Central Bank. The fight to create the same was extremely stretched and conflict-ridden, and yet the same was created; its creation felt like a little miracle. Modernizing the reforms of America seemed completely impossible because America was the only one amongst the developed nations who did not trust a big government or big banks.

Every bank of the USA stood on its own without any central reserve or a regulator controlling the same. All of this divided the people of America their bankers and banks, their farmers, populists, and ordinary Americans who enacted to the Federal Reserve Act. However, the same was formed, and this book gives you details of the formation of striking clarity and gripping on the situations. The author focuses on the 4 men behind the creation of history in America and its regulations.

This edition will amuse you with the history of developed America who did not believe in big governments and big banks. Amid their belief was a requirement of regulators for different businesses, especially the banking sector, for it is one of the riskiest sectors and can really harm the economy if not well regulated. The book includes the formation of the regulator of the banking system in the United States of America.

This book steps out of the box and explains the formation of the biggest regulator of the global economy. It focuses on 4 men who made the same possible. Breaking old practices and stepping into new ones can really make management simple and swift.

#6 – Nightmare on Wall Street: Solomon Brothers and the Corruption of the Marketplace

Showing off the influence and power of the epitome of Modern Wall Street, the writer describes the traders who become bankers without real experience but through the merits of luck and guts to build a financial giant. He talks about the breaking of traditional barriers by Salomon Brothers, who was a world power with the assets of $170 billion and a powerful force in London, New York, and Tokyo in the year 1991 and also the largest dealer in the government securities of the USA.

From traders to becoming a corporate bully, the firm manipulated in the government’s stock market with a scandal of $10 billion. They destroyed not only many careers but also a number of small businesses and reputation in business, which is very difficult to gain.

The writer describes the influential power Salomon Brothers with their stories describing the breaking of traditional barriers and becoming corporate bullies. He writes about their emerging and their steps towards destructions of self and others who relied on them. They not only manipulated and scandalized the US government for $10 billion, but they also ruined a number of careers, business reputations, and small businesses.

What can be better than learning a great lesson from the corporate bullies self and the destruction of others is not the real way of doing business? They spoilt their reputations in the market. The writer stresses on their arrogance and manipulative attitude towards destruction. Had the government taken care of the regulations and stopped them from creating their own regulations, they would never try the same.

This has been a guide to Banking Books. Here we discuss the list of books not only for bankers or prospect bankers. It is for all those who really want to know more about this industry and how it has become the backbone. You may also read the following list of books-