Comments in VBA programming are statements that are not executed or compiled but are only there to provide a brief description of any function, variable, statement, etc. These comments are not mandatory but are used so as to make the blocks of vba code more informative, readable, organized and easy to understand. Also, if we do not wish to delete certain lines of code, and neither want them to be executed, then we can comment on them. 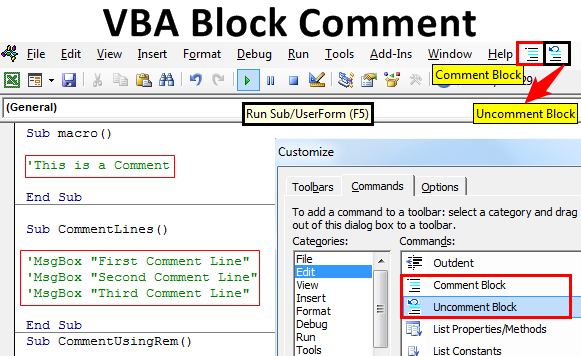 Let us say we wish to comment on a single line/statement/block in a VBA code. To do this, the Visual Basic Editor (VBE) has to be configured.

The Visual Basic Editor can be accessed as follows:

On doing this, a window opens as follows: 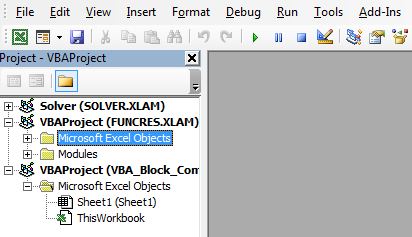 Right-click on the workbook name in the ‘Project-VBAProject’ pane and then click on ‘Insert’-> ‘Module’ as follows. 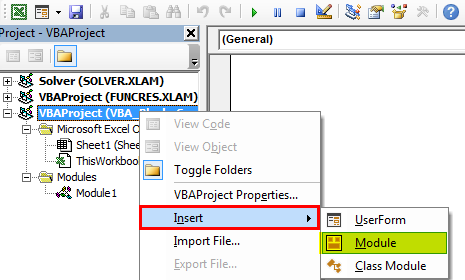 Now we can write our code or procedure in this module:

This method can also be used to comment on multiple lines by putting an apostrophe before each line as follows:

Now, let’s say we wish to skip over and comment on an entire block of code, or multiple statements of the code. In such a case, using an apostrophe before each statement would be quite tedious and time-taking when we have so many statements to comment on. So to do this, there is a built-in option of ‘Comment/Uncomment Block’ in VBE that is initially hidden in the toolbar and can be used as follows:

Step 1: Select the Statements from code.

Select the statements in the macro/procedure that are required to be commented on below. 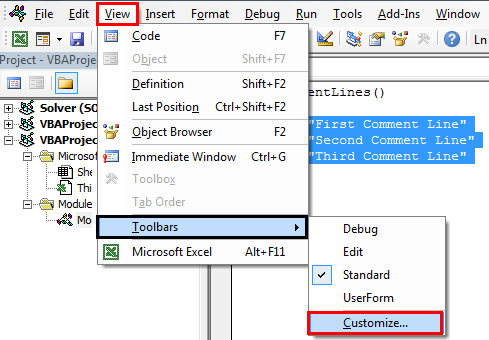 This will generate or open a ‘Customize’ pop-up window. Now click on ‘Commands’ -> ‘Edit’ and then click on ‘Comment Block’ and drag it to the toolbar as follows. 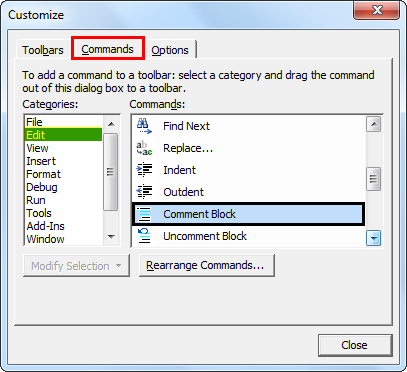 In doing so, the highlighted statements/lines would now be commented and turn out to be green in color as below:

So we can see in the above screenshot that the green statements will not be executed by the macro and will only be treated as comments block.

Another method that can be used to make a statement/line as a comment is to add the keyword ‘REM’ before it.

Let us see below how this works:

We can see in the below screenshot that when the keyword ‘REM’ is added before the statement: ‘This is a comment,’ then it turns out to be green and hence a comment.

Now let us see how this keyword can be used to comment multiple lines in the below screenshot.

So, we can see that apart from using apostrophe and ‘Comment Block,’ the keyword ‘REM” can also be used to comment statements of code or procedure. However, using the keyword ‘REM’ has some limitations:

Just the way we can comment a block of lines at one go, we can also uncomment the commented lines using the VBE built-in ‘Uncomment Block’ option in the same way as follows:

Select the commented statements in the macro/procedure that are required to be uncommented as below: 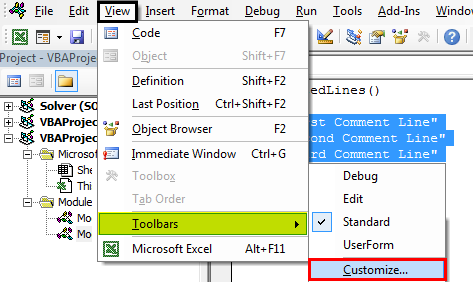 This will generate or open a ‘Customize’ pop-up window. Now click on ‘Commands’ -> ‘Edit,’ and then click on ‘Uncomment Block’ and drag it to the toolbar as follows: 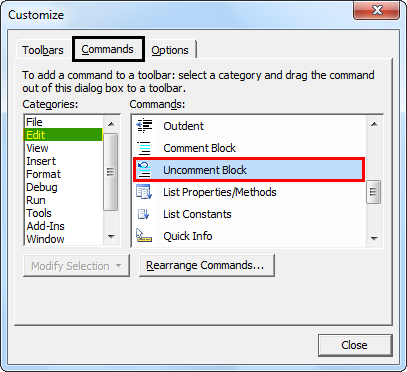 With this, we now have the ‘Uncomment Block’ icon on the Toolbar for its easy access.

Now click on the ‘Uncomment Block’ from the toolbar as follows:

In doing so, the highlighted statements that commented would now turn into executable statements of the code or procedure and change in color from green to black again as below:

So these statements are no longer now comments.

The following screenshot illustrates this:

This has been a guide to VBA Comment Block. Here we learn three ways to comment blocks of VBA codes using 1) Apostrophe, 2) Toolbar, 3) REM Keyword along with practical examples, and a downloadable excel template. Below you can find some useful excel VBA articles –