What is Accumulated Amortization?

Accumulated Amortization is an aggregated value and hence can be expressed mathematically as:

Accumulated Amortization = ∑ Amortized Value of the Asset Each Year

Accumulated amortization is used to realize the value of intangible assets. Examples of these type of assets are:

An important point to note is that these values do diminish in value and eventually get to zero.

Consider the example of a patent. Let’s consider a major pharma firm ABC Healthcare headquartered in New York, the US, who spends a good amount of money on its Research and development wing and comes up with a breakthrough drug that can help a deadly disease like cancer. This breakthrough has been the result of years of research by its R & D department.

The firm files a patent for this drug and holds exclusive rights for the next 10 years for 12 million dollars. During these 7 years, other firms and competitors are not allowed to produce this drug, although they can come up with a partnership with our firm but only at their discretion. However, the patent will expire and hence should be realized in the financials. 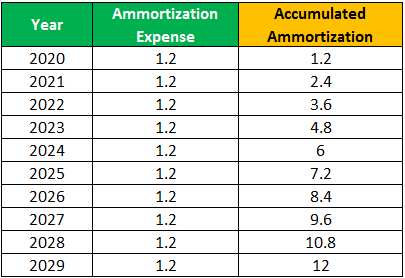 This expense will continue to be part of the balance sheet till 2029 post, which is completely amortized.

Refer to the given above excel sheet for detailed calculation.

Accumulated amortization is a useful mechanism to evaluate the value of intangible assets and the usefulness they provide to the firm. However, the point to note is that not all intangible assets can be amortized. Consider the case of patents and licensing agreements. These methods help in evaluating the competitive edge that firm gains in comparison to its peers and how it can use it present its financials in a better way to its shareholders.

Now consider the case of another intangible asset, Goodwill. Goodwill, as we know, is a measure of the synergy capacity that the firm has acquired over a time frame as a result of acquisitions. Hence goodwill should never be amortized as this value should always increase. In fact, much like land, which is never depreciated, it should be reviewed once a year to provide a better and current view of the underlying asset. One should see it as having an indefinite life and always adding value to the firm’s financials.

This has been a guide to Accumulated Amortization. Here we discuss formula to calculate the accumulated amortization along with an example and its importance. You can learn more about accounting from the following articles –