What is Goodwill in Accounting?

Under the accounting standards of US GAAP and IFRS, it is identified as an intangible asset with an indefinite life. It is not amortization; however, it is periodically (yearly) checked for impairment.

We note from the above example; Google acquired Apigee Corp for $571 million in cash.

Here is the breakup of the acquisition amount

How to Calculate Goodwill in an M&A Accounting?

We will learn to calculate Goodwill step by step with the help of an example. Let us assume that there is a company A that acquired company B for a total consideration of $480 million.

Let us now look at the steps –

You can find the book value of assets from the balance sheet of the company. Below are the financials of Company B. 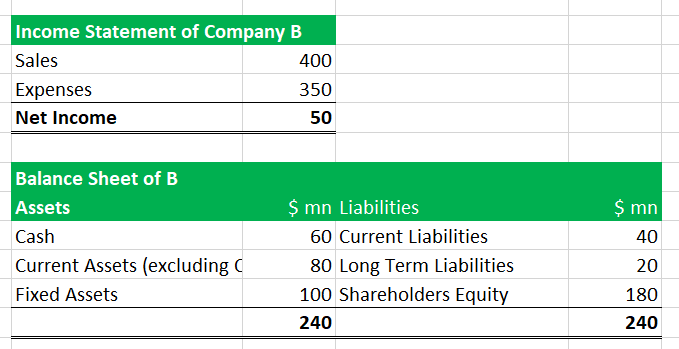 The fair value of assets can be determined with the help of an accounting firm as they are well equipped to value the assets of the firm. Below is the snapshot of the fair value of Assets of Company B.

Excess Purchase Price is the net of actual price consideration and the book value of the target company.

It is the difference between the excess purchase price and fair value adjustments.

It generally is recorded in the journal books of account only when some consideration in money or money worth is paid for it.

The journal entry is generally posted as follows:

Let us take an example to understand the goodwill journal entries.  The fair value of net assets acquired of ABC & Co in an acquisition is $10 million, and the amount paid is $12 million, then the journal entry is as follows.

What happens to the Internally Generated Goodwill?

It is not recognized as an asset because it is not an identifiable asset controlled by an enterprise that can be measured reliably at cost. The subsequent expenditure on intangible assets like brands, publishing titles, and items of similar nature are recognized as an expense to avoid any internally generated goodwill.

As per international accounting standards, it is no longer amortized or depreciated. Instead, it should be tested for impairment every year, as explained below. However, as per Indian accounting standards, goodwill amalgamation or merger is to be amortized over its useful life. Since it is difficult to estimate the useful life with reasonable certainty, it is suggested to be amortized over a period not exceeding five years unless a somewhat longer period is justified.

When a business is expected to wind up or insolvent, investors generally deduct the Goodwill from any calculation because it will likely have no resale value.

For example, ABC Co purchased a company for $12 million, where $5 million is Goodwill. After running the business for so many years with losses and you feel the market value of assets acquired through the acquisition of ABC company is very less, and it is now $9 million only. In this case, the market value of assets acquired dropped by $3 million, and it needs to be reduced by the same amount.

In this case, the entry for impairing is as follows,

When the reversal of impairment happens due to an increase in the fair value of assets, then reversal is allocated to carrying the amount of assets first to assets other than Goodwill on a pro-rata basis and then allocated later to Goodwill.

For example, In the above example, ABC Co acquired assets for $12 million, where $5 million is Goodwill, and when the market value of assets dropped to $6 million, then $6 million (12-6) has to be impaired. Then it is impaired for the entire $5 million, and other assets acquired are proportionately by $1 million.

In this case, 2 years later, the market value of assets acquired increased by $4 million, Then the value of $4 million to be first apportioned to assets up to $12 million, and if a balance still left, then that has to be allocated to Goodwill.

This has been a guide to what is Goodwill in Accounting? Here we discuss Goodwill Accounting, including journal entries, amortization, impairment, and its reversal and how to calculate it in M&A. You can learn more about Accounting from the following articles –