What is Negative Goodwill?

The negative goodwill arises in the financial statement of the company purchasing another company when the fair value of net identifiable assets is greater than the purchasing price paid for the purpose of acquiring the company.

We note from above, Aareal Bank completed the acquisition of Westlmmo for Euros 350 million, acquiring a Euro 4.3 billion performing European commercial real estate loan book. This transaction added value to Aareal Banks as Euro 150 million was recorded as Negative Goodwill upon closing the deal. 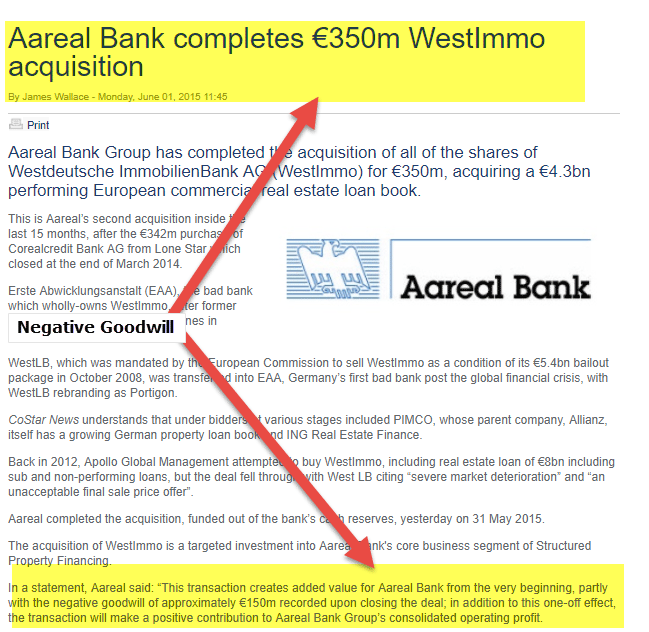 How to Interpret Negative Goodwill?

Negative Goodwill is a term coined in the context of one company taking over another. It’s again occurring to the former when the consideration paid for an acquisition is less than the fair market value of its net tangible assets. In literal terms, Negative Goodwill implies a bargain purchase.

Now the critical aspect to ponder here, why would someone be willing to sell the entity’s assets below its fair market value? Any wise person would think the assets can be disposed of at its fair market price, then why question for Negative Goodwill will arise in the very first place.

Well, let’s look into this. There may be a circumstance which may force such a situation namely:

Negative Goodwill is again for the acquirer entity and should be recognized as its books, but before that acquirer must review the calculations to ensure that everything is arithmetically correct and there is no mistake made in the calculation of various elements as Negative Goodwill does not arise normally. After all, buying a business costlier than the market price and being in a notion that we have acquired the same at a profit is not a wise idea.

Once it is confirmed that the net result is again on the acquisition, the resulting gain should be recognized in the books (Profit & Loss Account) of the acquirer company.

Any change in the management or control of the company, a valuation of the assets must be performed according to generally accepted accounting standards. This exercise is commonly referred to as a purchase price allocation. It is called so because the purchase price of the acquired company is allocated across all tangible and intangible assets acquired. Generally, the value of the acquired company is greater than the value of the acquired assets. It may also be understood as the whole company is greater than the sum of its parts. That additional value of the whole company over and above is referred to as Goodwill. There are certain transactions in which the total value of the parts put together (individual assets) acquired in a transaction exceeds the price paid for the total company. It is commonly known as “bargain purchase.”

For understanding Negative Goodwill, it’s helpful to understand Positive Goodwill beforehand. In a typical acquisition scenario, acquired tangible assets include accounts receivable, inventory, fixed assets, i.e., machinery, plant, and equipment, etc. There may be a number of intangible assets in addition to tangible assets that form a part of the acquisition and are seen as value drivers. These intangible assets can be a brand name, patents, or a certain technology, licenses, positive customer relationships having the capability to have an additional business pull. For passing the test of allocation, it is mandatory to have a legal and enforceable contract to use these assets in favor of Acquirer Company. After allocating value to all of these assets, any excess amount left over is considered as Positive Goodwill.

The following example will show the purchase price allocation for $ 5 million acquisition:

Also, have a look at Impairment of Assets | Goodwill Impairment

While most of the time, business acquisition transactions happening would result in Positive Goodwill, there may be some instances where the fair value of the assets taken over is more than the price paid for the acquisition. This scenario typically results in Negative Goodwill and generally termed “Bargain Purchase.” Using the same example used earlier, if the purchase price/deal price is USD 4 million instead of USD 5 million, the purchase allocation would be as follows:

This type of scenario calls for additional analysis, which we will look in to very shortly.

The prime most implication of a bargain purchase is the gain to the buyer if it is a purchase below the fair value of the acquired assets. A bargain purchase gain should be recognized at the time of acquisition and recorded as an extraordinary income at the date of acquisition. However, it is essential to note that this is again for the purpose of accounting only. It would in no way be included in the calculation of income subject to taxes.

This article has been a guide to what is Negative Goodwill and its meaning. Here we discuss how to interpret negative Goodwill along with its example and sign. You may learn more about financing from the following articles –