What is Goodwill Amortization? 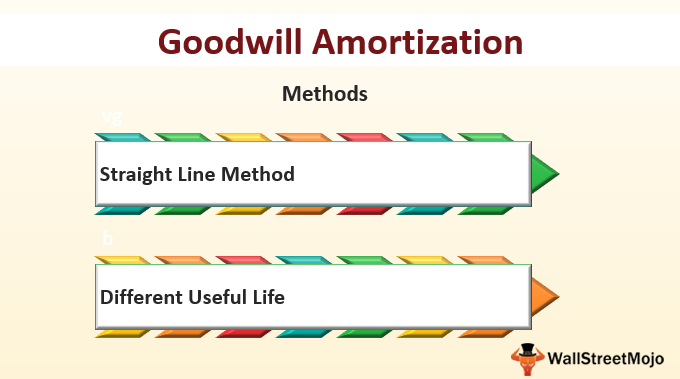 In the Straight Line Method, amortization is allocated amount over 10 years (maximum up to 40 years) unless the shorter life is more appropriately known. Every year an equal amount will be transferred to Profit and Loss Account.

In different useful life method of goodwill amortization, allocate the cost of the asset to expense over its useful life. For every entity, useful life can be different. Every entity has its policy according to its nature of business.

Below is an example of a journal entry.

Let’s see some practical examples to understand it better.

Calculation of Goodwill can be done as follows –

$15 million will be the goodwill amount that BCD will record as Goodwill in their books of account after purchasing XYZ.

In the above Example, 1 after a year ahead Company BCD changed the product features and now deals in a different product this new product is not so successful as the earlier product was. As a result, the fair value of the company starts declining new fair value is $58 million book value is $65 million. Calculate the Impairment loss.

You can do the calculation of impairment loss as follows –

In the books, Goodwill is recorded as $15 million.

Now, this amount of Goodwill will reduce by $7million.

Small Ltd. has the following assets and liability

Big Ltd acquires small Ltd and paying the purchase consideration of $1300 million; what will be the goodwill value big Ltd will record in his books after the acquisition.

Calculation of amortization amount in 10 years will be – 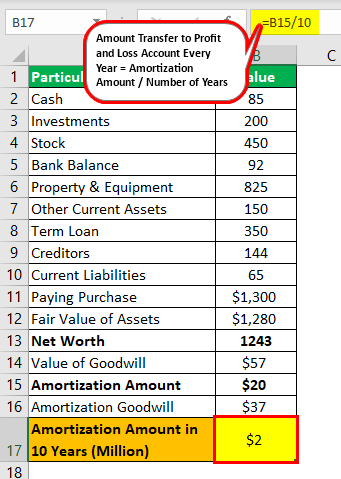 You can refer to the given above excel template for the detailed calculation of goodwill amortization.

How Amortization Reduces the Tax Liability of an Entity?

As you debit the amortization amount to profit and loss account, the taxable income reduces, and tax liability also gets lower.

This article has been a guide to What is Goodwill Amortization & its definition. Here we discuss goodwill amortization methods along with examples and its journal entries. You may learn more about accounting from the following articles –