Capital Lease is nothing but the right or Ownership of a leased asset is transferred to lessee and lessor only finances the leased assets. 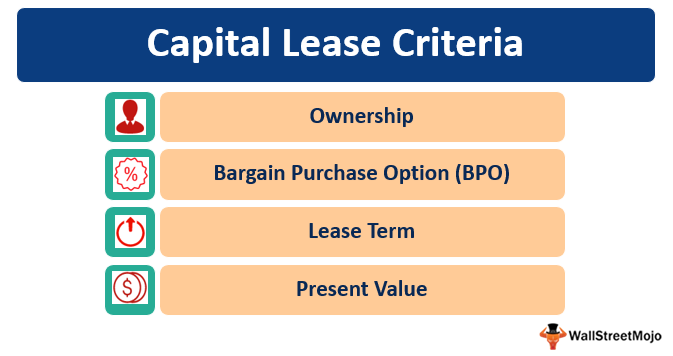 Top 4 Criteria for a Capital Lease

Capital Lease criteria are mainly of four types, and the lease agreement is valid only if it satisfies any of the four options – 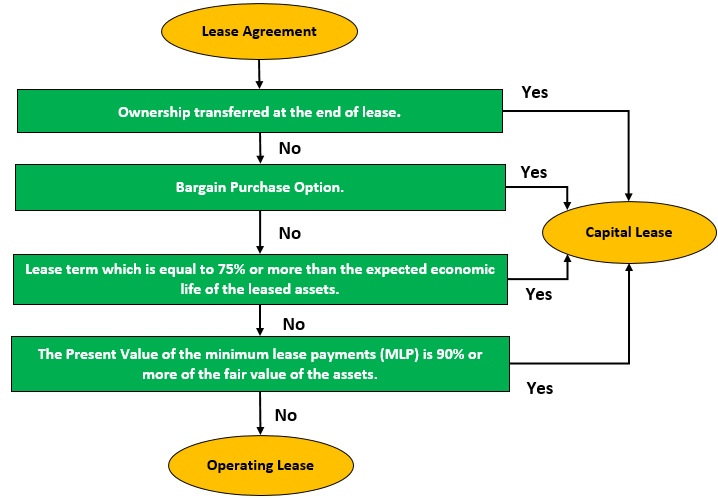 Let’s try to understand the Ownership lease through the below basic example.

So the above lease is classified as Capital Lease as lease agreement fulfilling the Ownership criteria.

If the lease agreement provides a provision of a Non-cancellable lease term, which is equal to 75% or more than the expected economic life of the leased assets, than such leasing agreement is called Capital Lease.

So if you look at the example explained in criteria two, it’s fulfilling the lease term criteria, as lease term is 15 years and life of assets is 17 years, so please term is more the 75% of economic life the leased assets in the above-mentioned example.

An ABC limited signed a lease agreement with XYZ limited for Machinery, which has a fair value of $17,000, and ABC limited leased it for 3 years. In return, XYZ limited will repay Monthly rent of $600 and the economic life span of machinery is 5 years, the company also charges 3% of interest over a loan of $17,000.

So in the above example, lease term is 3 years, and the economic life span of the leased asset is 5 years, so the lease term is less than 75% of the assets life span, so the above lease is called an operating lease.

The Present Value of the minimum lease payments (MLP) is 90% or more of the fair value of the assets.

So if you take the example in criterion two, the Fair market value of an asset is $ 460,000, and the Present Value of Minimum Lease Payments is $450,000, which is more than 90%, so lease agreement satisfied the MLP present value criteria.

Now we will apply the four classifications criteria.

Now suppose if above lease agreement provided a provision that lease term is equal to the estimated useful life of copier than the transaction must be recorded by the lessee as a capital lease since it fulfills the criteria of the non-cancellable lease term is equal to 75% or more of the expected economic life of the assets.

This has been a guide to Capital Lease Criteria. Here we discuss the top four criteria along with step by step examples and explanations. You can learn more about accounting from the following articles –