Deleveraging is defined as the process where an organization slashes down its debt or financial leverage by either selling its own assets or raising equity capital. The prime goal of deleveraging is to curtail the proportionate percentage of the balance sheet of a business that is funded by its liabilities.

We can clearly see the second ratio looks much more financially healthy and profitable and also investors would also like to pick up the second option to put their money in. 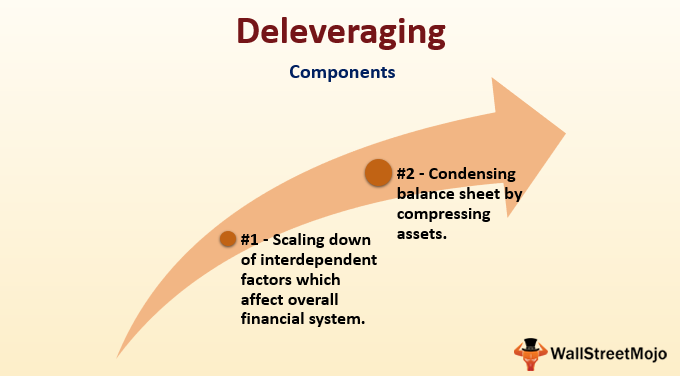 Freeport-McMoRan Inc. is an example of an organization that mainly dealt with mining that has implemented deleveraging recently. It had borrowed too much after the recession period, where its debt increased six times to more than $20 billion due to new business ventures.

The decline in prices of oil, however, compelled Freeport to change its plan. It started selling assets and making payments for the bonds, curtailing its overall debt to $11.1 billion. Also, it showed tremendous improvement to its EBITDA which almost got doubled in the second quarter from a year earlier than expected, bringing down the leverage of its cash flow to 1.4 times from 2.9 times.

Some of the advantages of deleveraging are as follows:

Some of the disadvantages of deleveraging are as follows:

Some of the limitations of deleveraging are as follows:

Considering a business view, deleveraging provides strength to balance sheets. It is an effective course of action to get a company back to its operation or provide a lifeline to it. From a practical scenario, however, deleveraging is not that great to look at. Job cuts, shutdowns, reducing budgets, and selling off assets are all the results of deleveraging where the business will seek to store the extra cash in order to pay off its obligations.

This has been a guide to what is deleveraging and it’s meaning. Here we discuss examples of deleveraging along with the practical scenarios, limitations, advantages, and disadvantages. You can learn more about fixed income from the following articles –