What is the Pecking Order Theory?

Pecking order theory refers to the theory with respect to the capital structure of the company where the managers are required to follow a specified hierarchy while making the choice of the sources of finance in the company where according to the hierarchy first preference is given to the internal financing, then to external sources when enough funds cannot be raised through internal financing where debt issue will be considered first to generate funds and lastly the equity if the funds cannot be raised through the debt as well.

This theory was first suggested by Donaldson in 1961 and later made modified by Myers and Majluf in 1984. This theory might not always be the optimum way, but it does provide guidance on how to start financing.

Broadly, the method of raising funds for a project or a company is classified into internal and external funding. 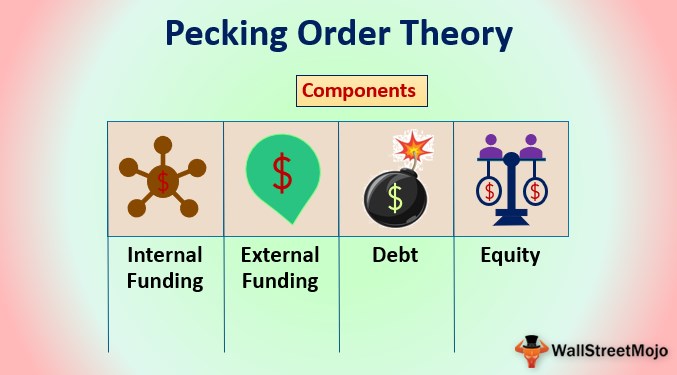 Internal funding/ financing comes from retained earnings a company has. Why do the CFOs prefer internal funding? Because it is easier to raise funding, the initial funding setup costs are almost zero – because no bankers are involved. Even though internal financing is pretty easy and simple, there are reasons why it might not be preferred. One is that the risk transfer of losses still stays with the company.

If the company is taking up a risky project but their risk preferences are low, then internal financing is not the optimum way to finance the project. The second reason is taxation. By taking debt, the company can reduce their taxes based on the amount of interest they are paying on the debt. Internal Financing has more stringent regulations on how the funds can be invested without tax. Above all, to finance the project budget internally, the company has to have enough funds – which limits the other ways that capital can be utilized.

External financing can be of two types. By taking the requisite budget as a loan or by selling a part of the company’s share as equity. There is an entire discussion on how to choose an optimum capital structure that can help the company in minimizing the cost of capital and maximizing the risk transfer. However, that discussion is out of scope for this article and that shall be dealt with in another article separately. Now, let us dwell on details about each type of funding.

The company will also have the flexibility to buy back the bonds if it wants to or create a bond structure that supports the company’s operational structure. However, bonds are not really an ideal way, if the company wants to make sure of the funding. Many things could go against the company while raising money from bonds. However, even though a bit expensive and the company has to pledge assets, raising money through bank loans gives the company a guarantee that the money will be raised.

One great advantage of equity financing is that it is not risky. It is completely dependent on the buyer to own a share of the company and the risk transfer is a hundred percent in this case. The company has no obligation to pay the shareholder anything.

POT says that the order in which the company tries to raise funding is:

The following are examples of the pecking order theory

Consider the following situation. A company has to raise 100 million USD to expand their product to different countries. In addition, the following is the financial structure of the company.

If the company has to raise funds for the project, it can do by either one or a combination of the above methods. The pecking order theory says that the cost of funding will be in ascending order in the above case. Let us calculate it for ourselves and try to verify the same.

Now, depending on the risk preference of the company, the CFO can make a decision on how to raise the capital accordingly.

To see if, and how, the Pecking Order Theory holds in real life; let us consider a couple of companies, and how they raised financing. Since these are real companies, the order in which they raised the funding will have a lot of other variables that take a role in decision-making. For example, when the theory was developed, the concept of venture capital was at a very nascent stage. This makes it difficult to see where venture capital holds in the pecking order theory. It is a sort of private equity but also has similarities to internal financing as nothing is pledged. It also has characteristics towards equity – since the venture capitalists expect more than the general equity – because they hold the risk.

The following image shows how Uber’s funding rounds have gone through. Let us only use a couple of examples to prove POT and a couple to disprove POT. 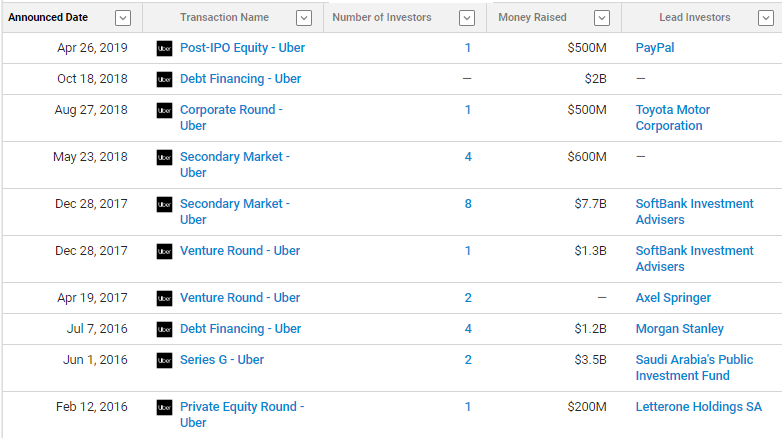 Where POT holds: The first round of funding, as expected is raised by the founders of Uber – Letter one Holdings SA. They used 200,000 USD of their own money in 2016, without any obligations. The first debt round for Uber came around in 2016, where it raised 1.2 billion USD, a post that Uber had another debt round where it raised 2 billion USD. Most recently, Uber raised about 500 million USD via an Initial Public Offering. This is a classic scenario where POT holds true and the company followed a specific hierarchy to raise money for expansion.

Where POT fails: However before the company raised first debt round in 2016 and after the first internal financing round in 2016, it had over 6 rounds of financing where it raised about 2 billion USD through selling equity – privately. Pecking order theory is based on information asymmetry and such cases are not covered in it. This is a limitation of the pecking order theory.

Advantages: Where POT is useful?

Pecking Order Theory helps only in analyzing a decision but not in actually making it. It does not help in calculating the costs and looking at Uber’s example it will explain that in reality, companies do not actually follow in the same order.

POT describes what and how financing should be raised without providing a quantitative metric to measure how it has to be done. POT can be used as a guide in how to select financing rounds but there are a lot of other metrics. Using POT in a mixture of other metrics will provide a useful way to make a decision about financing.