What is Return on Assets (ROA)?

Return on assets (ROA) is the ratio between net income, which represents the amount of financial and operational income a company has got during a financial year, and total average assets, which is the arithmetic average of total assets a company holds, to analyze how much returns a company is producing on the total investment made in the company.

Return on Assets of General Motors (5.21%) is greater than that of Ford (3.40%) for FY2016. What does it mean? It relates to the firm’s earnings to all capital invested in the business. In this article, we will discuss Return on Assets in detail.

Trying to understand how much revenue one firm would earn by employing its assets is not a good measure. So there should be something more refined. And the refinement has been done in Return on Assets ratio.

When we calculate the asset turnover ratio, we take into account the net sales or the net revenue. However, revenue always is not a good predictor of success. Many organizations earn good revenue, but when we compare the revenue with the expenses they need to bear, there would hardly be any profit. So comparing net revenue with the total assets wouldn’t solve the issue of the investors that want to invest in the company.

Take an example of Box Inc. Let us have a look at its Asset Turnover Ratio. This asset turnover doesn’t tell us much about the performance of Box Inc. 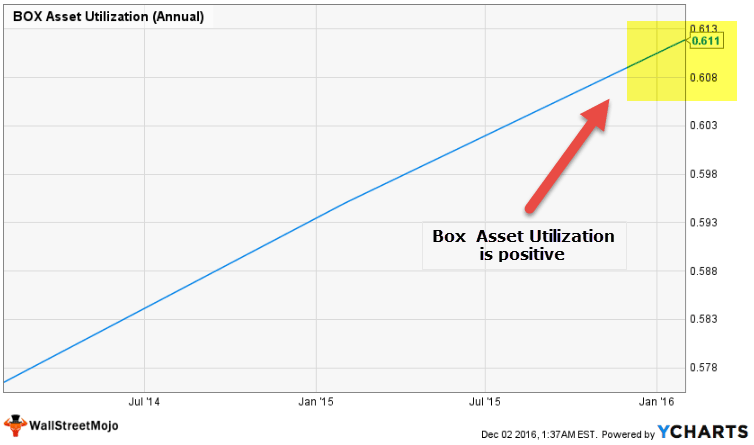 However, when we look at the Return on Assets Ratio of Box Inc, we note that it has been negative all the way. It implies that the company is unable to generate returns with respect to its deployed capital. 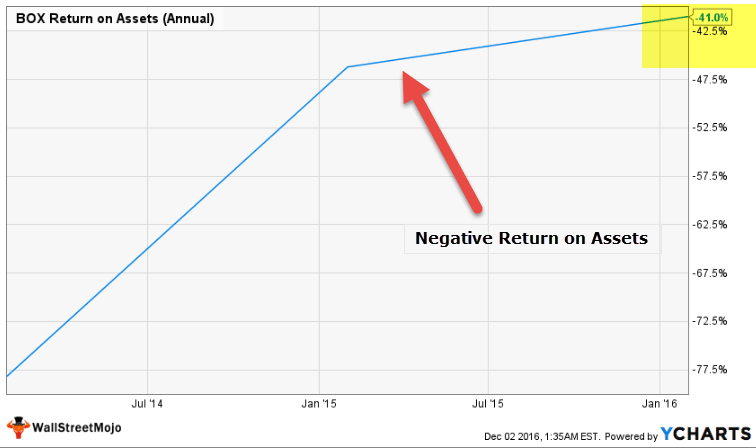 Let’s have a look at its formula.

There are diverse opinions on what to take in the numerator of this ratio! Some prefer to take net income as the numerator, and others like to put EBIT where they don’t want to take into account the interests and taxes.

Let’s talk about the average total assets. What will you take into account while computing a figure of average total assets? We will include everything that is capable of yielding value for the owner for more than one year. That means we will include all fixed assets. At the same time, we will also include assets that can easily be converted into cash. That means we would be able to take current assets under total assets. And we will also include intangible assets that have value, but they are non-physical in nature, like goodwill. We will not take fictitious assets (e.g., promotional expenses of a business, discount allowed on the issue of shares, a loss incurred on the issue of debentures, etc.) into account. Then we would take the figure at the beginning of the year and the end of the year and would find an average of the total figure.

Interpretation of Return on Assets

Let’s do the calculation to find out the Return on Assets for both the companies.

First, as we have been given Operating Profit and Taxes, we need to calculate the Net Income for both of the companies.

And as we have the assets at the beginning of the year and at the end of the year, we need to find out the average assets for both of the companies.

Now, let’s calculate the ROA for both companies.

For Company A, the ROA is 75%. 75% is a great indicator of success. And if Company A has been generating profits in the range of 40-50%, then investors may easily put their money into the company. However, before investing anything, the investors should cross-check the figures with their annual report and see whether there is an exception or any special point is mentioned or not.

For Company B also the ROA is quite good, i.e., 53%. Usually, when a firm achieves 20% or above, it is considered healthy. And more than 40% means the firm is doing quite good.

Return on Assets Calculation for Colgate

Now let’s understand the ratio from a practical standpoint. Below is the snapshot of Colgate’s Balance Sheet.

Below is the snapshot of Colgate’s Income Statement. Please note that we need to use EBIT for the Return on Total Assets calculation.

Colgate’s Return on total assets has been declining since 2010. Most recently, it declined to its lowest to 21.9%. Why?

The primary reason for the decrease in sales was the negative impact due to foreign exchange of 11.5%.
Organic sales of Colgate, however, increased by 5% in 2015.

In this section, first, we will look at a few banks and their Return on Total Retail Assets so that we can conclude how good they are doing in terms of generating profit. 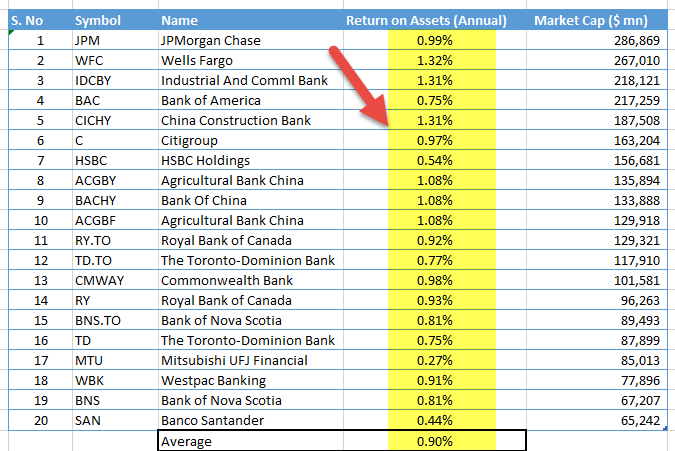 From the above graph, we can now compare the ROA of the top global banks.

To understand where these banks stand in terms of comparison, we can take an average and compare each bank’s performance. We have taken each bank’s ROA, and the average ROA is 0.90%. That means many banks that are performing over 0.9% are doing good.

As an investor, you should definitely find out Return on Assets ratio before investing in a company. But along with that, you should also consider other metrics like Return on Equity, Return on Invested Capital, Current Ratio, Quick Ratio, Du Pont Analysis, and so on and so forth.