Undercapitalization in term of business means a scenario where a business faces a shortage of fund or capital requirement to continue its day to day operations and this is prevalent or generally seen as a problem with small business firms. The business in these moments also faces the lack of ability to procure any new source of funding or capital.

Undercapitalization can be a problem for any business, but it is generally prevalent and common for business units, which are on a small scale. It is considered a critical trigger for some serious financial problems within small business units. It can sometimes lead to closure or shutdown of the business, thus leading to grave business failure. The other problem is that it can restrict the firm from expansion or investing in other ventures because, with sufficient capital, every firm will find it extremely difficult to venture into new areas or expand. 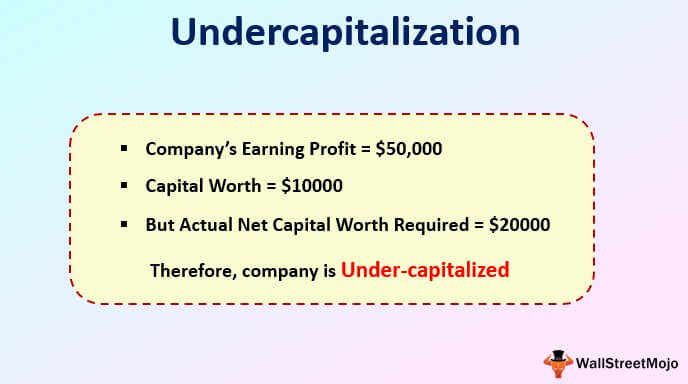 Undercapitalization takes place when companies are earning higher profits at a lower rate as compared to its peer operating in the same industry. It is a situation where the business has a lack of funds to support operations. It can also be a case where the value of assets a company holds is comparatively very high that what the company has raised in the form of capital. It is like suppose the average rate of return in the industry is 10%. Still, the company, whereas the company is making an earning at the rate of 20% on its capital employed, which makes the company an undercapitalized business unit.

Let us assume a company is running its full operations and earning a profit of $50,000 by employing a capital worth $10,000. Now the scenario is such the actual capital required to earn this amount of profit is $20,000, but the company is making money on the same capital but worth $10,000.  Thus the company is undercapitalized to a value of $10,000.

Effects of Undercapitalization on Investors and Company and Shareholders

Undercapitalization can be a problem for any business, but it is generally prevalent and common for business units which are in a small scale. It is considered a vital trigger for some serious financial problems within small business units and can sometimes lead to closure or shutdown of the business, thus leading to grave business failure. It can be solved by effective policies if implemented by the management.

This article has been a guide to Undercapitalization and its definition. Here we discuss how it does work along with an example, causes, effects, solutions, and drawbacks. You can learn more about from the following articles –