What is Pre IPO?

Pre IPO can be defined as a method used by companies to procure capital by selling a large amount of shares/stocks before it has actually been publicly traded in some exchanges to private investors, hedge funds, HNIs, etc. and also it has no prospectus available when the sale takes place. 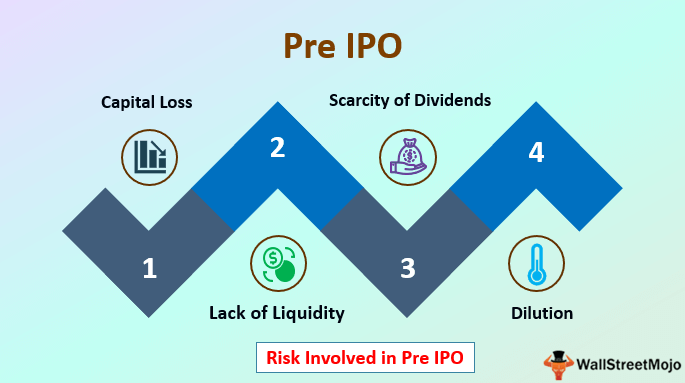 Uber, the well-known app-based taxi service company, had issued pre IPO placement before the launch of its IPO in May 2019. The shares were very limited and were available to only key individuals from the board of directors and also for private investors to raise significant amounts of capital before the actual launch of the IPO.

How to Invest in Pre IPO?

Pre-IPO operates more in an unorganized when compared to the IPO process. One can invest in such shares by:

Investing in companies where the IPO has not been tried and tested can, at times, lead to total capital washout. Here the expected return is also coupled by the risk of a complete or partial wash out of the sum invested in such unlisted companies. The company may go bankrupt in the future due to operational failure or absence of future funding and lead to a loss to the capital invested by pre IPO.

When we invest in an unlisted company, the chances of selling the share in the future are grim as there be a lack of buyers interested if the company fails to generate a positive pulse in the market. Thus on account of the difficulty in selling or trading the shares, a liquidity crunch may tend to arise.

Few companies may fail to pay dividends out of Pre IPO placements because majority shareholders will opt for the money generated to be reinvested in the company itself. Thus companies raising capital by Pre IPO will find it difficult to give returns in the form of dividends.

If the company plans to accumulate new funds at a later stage through additional funding by issuing newly subscribed shares, the value of holding previously held by pre-IPO investors who fail to subscribe to this new additive capital will eventually fall.

This article has been a guide to What is Pre IPO & its Definition. Here we discuss how to invest in pre-IPO along with examples, risks,  advantages, and disadvantages. You can learn more about from the following articles –