What is Seasoned Equity Offering?

The seasoned equity offering is defined as the additional offering of shares by the business after bringing in their initial public offering in the stock markets. It is also referred as secondary equity offering wherein such activity is done basically to increase the capital by approaching the financial markets.

This secondary issue is generally brought in by the companies that are already listed in the financial markets. It is also regarded as the follow on offering as it is brought after the initial public offering. The business approach the financial markets with the intent of gathering more proceeds from the market. The business that additional issue shares are categorized under the category of blue-chip companies.

The seasoned equity offering can further be bifurcated into non-dilutive seasoned issues and dilutive issues. The non-dilutive issues generally cause existing shareholders who hold a larger stock of shares to sell their holding in full or in part. The existing shareholders perform such an exodus as they visualize such issues under negative light or under a bad impression.

Further such corporate events cause the share prices to deteriorate. Under dilutive issues, the shares issue new equities to the financial markets and raise further finance. 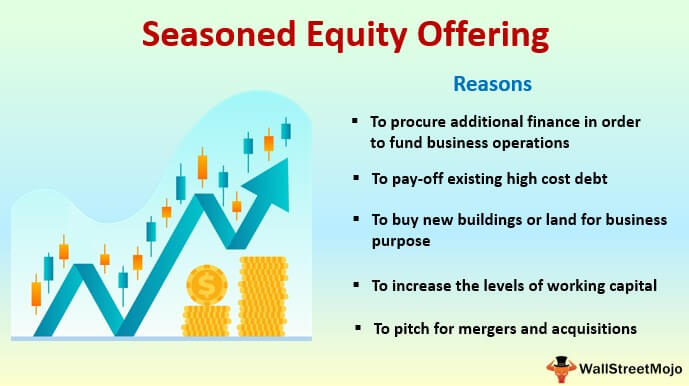 Let us take the example of XYZ corporation. The business is looking forward to paying its debt and hence looking to raise additional finance by offering a seasoned equity issue. The business employs an underwriter to facilitate the financial transaction.

Let us take the example of the real world. The investment bank Goldman Sachs on April 13, 2009, initiated and completed a seasoned issue amounting to $5 billion. The proceeds so arranged and collected were used to redeem the TARP capital. TARP is an abbreviation that stands for the Troubled Assets relief program.

Since the company was itself an investment bank, it handled the issue on their own. Hence, they bore negligible floatation costs and handled their own press releases and registrations. The Investment bank Goldman Sachs went public or had its initial public offering to take place in the year 1999, and it brought its first seasoned issue 10 years later down the timeline.

Let us take the example of a private investor. He or she offered to sell 1,000,000 shares to the general public in one lot. In this type of seasoned issue, the wealthy private investor gets the proceeds from the transaction, and the business does not get any proceeds. Such transactions do not dilute any existing ownerships.

The business resort to seasoned equity offering when they are felling short of financial resources to cover their high finance costs on the existing issued debt. It additionally resorts to such a corporate event when the business visualizes or sees a new high growth project in its pipeline. Such issues, therefore, help businesses pursue an expansionary policy and thereby ensure that the business grows despite facing challenges on the financial front.

The initial public offering is always visualized under positive light and carry positive sentiments to the new investors. The seasoned issues, on the other hand, are visualized under a negative impression to the existing as well as new shareholders. The reason being that such issues dilute the ownership of the existing shareholders until and unless they actively participate in such issues. For new investors, they may see it in a bad impression because they might get the feeling that the business is not performing up to the mark.

The seasoned equity offering is termed as the offering that is brought in by the blue-chip business to facilitate business expansion and growth. This is brought in after the initial public offering to raise finance for business requirements.

This has been a guide to what is Seasoned Equity Offering and its definition. Here we discuss features, examples, reasons for such an offering along. You may learn more about financing from the following articles –