Regressive tax refers to the system of the taxation under which all of the persons in the country are taxed at the same rate without giving the consideration to the income level of those persons due to which greater percentage of the income of the low-income group is charged as tax when compared with the high-income group in same country.

It is a simple type of tax system to calculate tax, which is levied on all the citizens of the country irrespective of their income. Here every citizen should pay the same amount of tax. It is called regressive because the higher income group pays less tax than the lower income group people. The major part of the income is paid as a tax by the lower-income citizens. This type of tax is mostly not levied on the income tax. 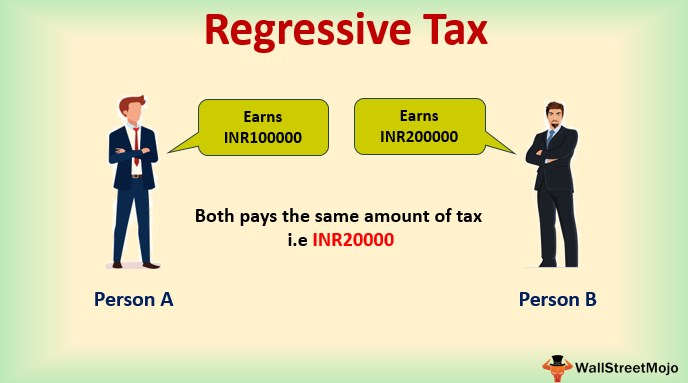 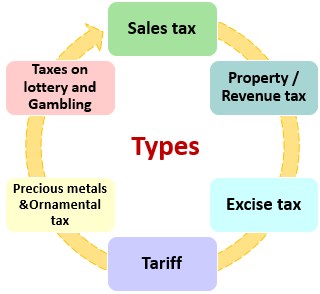 Property tax is the amount paid by the property holders. When 2 different people whose income is different and the lives in the same locality have to pay the same amount of tax to the government and the tax is paid on the property owned but not on the income earned by the individuals. This tax is levied on the basis of the location, dimension, and size of the property. Example: If A and B who have an income of INR100000 and INR200000 respectively and owns land with the dimension of 100*100 should pay the same amount of tax irrespective of their income.

An excise tax is regressive in nature. The excise tax is an indirect tax where the tax is not paid by the consumers directly, but the tax is passed on the merchant or producers to the wholesalers, from wholesalers to retailers and from retailers to consumers indirectly. This excise tax is levied on the products like petrol, alcohol, and tobacco; the tax rate is relatively high when compared with other forms of tax as these taxes are one of the high revenue-generating to the government.

Regressive Tax Example: the tax on petrol will be the same for all groups of people irrespective of income, and it is levied on the quantity of petrol purchased.

It is the tax levied on the imports and export of goods where the tax levied on the goods will ultimately hit the consumers who purchase the products. If the high rate of tax is imposed on the necessary goods imported or exported then, it will be a burden for the low-income group to purchase these goods, but they will not have any option other than purchasing it because it is a necessity for the daily living.

This type is levied by the government on the rare metal items like gold, silver, and platinum ornaments. Where in some of the countries’ purchase of gold is a tradition in a country like India at the time of marriage and celebrations Etc? Where the tax is levied on the quantity of the metal purchased but not on the income of the people. The tax rate is increased for the rare metals and diamonds because these are rarely found, and this increases the revenue flow to the government.

#6 – Taxes on lottery and Gambling:

They are more regressive in nature as the tax rates will be flat irrespective of the amount won in the lottery or Gambling.

A regressive tax is a simple type of tax levied on the citizens of a country, and the tax is not levied on the income instead a flat amount is levied for everyone which is a very convenient form of tax for the developing and underdeveloped countries which helps for the development of the countries, but this type of tax is suitable only for the countries where the income difference among the people is less and the income earned is similar to each other So there will be no discrimination on the tax levied.

This has been a guide to what is Regressive Tax and its definition. Here we discuss the top 6 types of  Regressive Taxes System and its advantages and disadvantages. You may learn more about our articles below on accounting –