What is Tax Reform?

Tax reform is a policy implementation by the government through which few alterations are made into the tax system in order to overcome the loopholes and enhance the effectiveness of the tax administration in the country in order to generate higher revenues from taxes as compared to the overall spending.

Tax reform, as the name suggests, is a kind of reform made in the tax system of a nation that can help the government of the same in minimizing the chances of tax evasion and avoidance. It brings sustainability in the revenue levels, addresses issues and conflicts concerning inequality employing behavior change and redistribution, and also aids in the development of a nation.

Tax reform is introduced for multiple purposes. The first and foremost purpose is to minimize the slightest of probabilities of avoidance and evasion of the tax from the economy. Another purpose is to induce a higher rate of sustainability in the revenue levels and directing the public investments into desired avenues by means of providing tax deductions, tax breaks, and tax exemptions. The ultimate purpose is to enhance the overall functioning of the tax system and bring economic growth in the country.

Tax reform is introduced to fulfill multiple objectives. It aims at improving the efficiency of the tax administration and allowing it to become more systematic by: 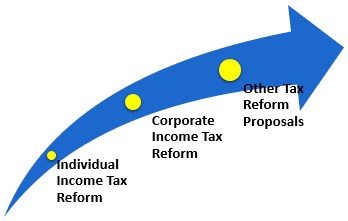 The introduction of Carbon taxes is one of the prominent examples of tax reform. Some of the people suggest that with the introduction of the carbon taxes in any economy, to two goals can be achieved that includes firstly the raising of the revenue of the government as the person who uses the carbon content of the fuel will have to pay the taxes to the government of the country, and another goal is discouraging the use of the carbon-intense energy as with this government is ultimately trying to reduce the negative effect of carbon content in the environment thereby creating positive environmental effects.

The effects of such reform may not be the same for all taxpayers and economies too. On the one hand, It might enhance the functioning of the tax system while, on the other hand, it paves ways for political pressures that are short term in nature. These reforms have somehow contributed to the creation of certain tax incentives that has ultimately lead to the distortion in the economy and have even marginalized not just the efficiency of the tax system but has also allowed it to become more fair and transparent as compared to what it used to be earlier.

There has always been an undying need for the changes in the tax system. The collection of taxes is necessary for funding the services that are arranged and provided by the government of a country. The tax system must be efficient enough for the collection of a sufficient amount of revenues and boosting the economic growth of a country. No matter how systematic the tax system of a country is, the taxpayers will find a way by identifying and taking advantage of the loopholes in the system and avoid/ evade taxes. As a result of this, the need has risen and ensures that the tax administration of a nation is totally organized.

Tax reform focuses on strengthening the current tax system and widens out the tax base. Tax reform aims at enhancing the efficiency of the overall tax system by lowering marginal tax rates, reducing taxation on investment and savings, boosting the economic development of the nations, lowering the number of tax defaulters, etc.

This article has been a guide to what is Tax Reform and its definition. Here we discuss objectives, types, examples, and need for tax reform along with benefits and limitations. You may learn more about financing from the following articles –