What are Taxation Principles?

Taxation Principles are the set of guidelines that help the lawmakers and governing bodies to formulate strategies and plan their execution to ensure devising a robust tax structure which is aimed at not only increasing revenues but also bring social and economic equality to its citizens.

Taxation principles ensure that its subjects play an equal role in building a healthy and strong economy as per their respective abilities. To do so, it is imperative that the tax structure is fair and is not harsh on any particular section of society or individuals. It should be easily understandable and devoid of any ambiguities. To ensure all these conditions are met, there are certain guidelines that are commonly known as taxation principles. 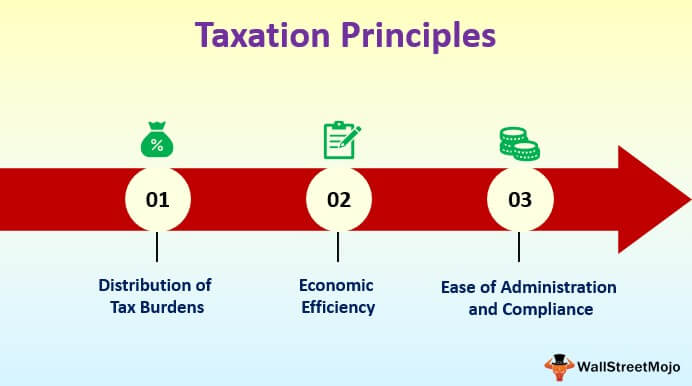 This principle guides the regulators or lawmakers to make sure that there is a realistic distribution policy is at a place. The first and foremost guideline in this part is the concept of horizontal equity. This concept is based on the assumption that individuals at similar levels should have the same tax obligation. Howsoever simple it may sound, it is easily and equally violated in both national and international circles. The basic reason is the lawmakers consider their duty to uplift the poor and weaker sections of the society compared to the privileged ones. Hence more often than not, you would see farmers, homemakers getting relaxed reforms compared to the middle class and service class. Although it remains debatable if this deviation is the right option.

The supporters of this option empathize on the guiding principle -The ability to pay. This recommendation is based on the notion that the tax burden should be distributed in such a way that it takes care of the capacity of the person to bear that tax liability. The taxes that suit this notion are income taxes, while the service charges can be an example of the former category. However, an important argument here is that the individual tax bearing capacity should be deduced not based on what he earns but based on what he spends or consumes. Whatever may be the thinking process, but the ability to pay weighs heavily on equal distribution guidelines, and that’s why we see a slab based structure for income tax calculation.

Normally the economic laws of supply and chain ensure that market is efficient, and the economy is robust.  In many ways, the requirement that the tax system should be efficient stems from the notion that markets are self-correcting and perfect. Hence in ideal scenarios, tax policies and guidelines should not interfere with the consumption, production, and supply chain cycles.

However, there is no reason to believe that such a status quo would always be maintained. The taxation system, at times, should interfere with making sure that economic and social goals are realized. An example can be levying higher tax rates on cigarettes and alcohol in comparison to other commodities to discourage people from consuming these sin products.

#3 – Ease of Administration and Compliance

While framing tax structure, the regulating body should ensure that these are managed with the utmost accounting framework and liabilities. These should be crystal clear without any ambiguity, should be stable for the economy and society in general, cost-effective, and convenient. These factors become more of a threshold rather than just a guiding principle in developing markets compared to developed ones. This is because of illiteracy, lack of proper channels to resolve ambiguities, and also prevalent administrative challenges.

Consider the example of the first virtue – clarity. If the taxation rules are not clear or have too many twists and turns, it would be difficult for the common public to understand them. And even if they do understand them, they might not be able to take its full advantage and may end up calculating the wrong tax on their own. There can be a difference in tax liability and tax payable as common people might not be able to take advantage of various tax-saving opportunities. They might have to reach out to tax experts to seek guidance, which would have an economic cost of its own. These scenarios are very common in developing economies.

Though the taxation system at large is focused on increasing the revenue of the government, it can also be used to revive the economy. Let’s discuss this aspect in detail. Public expenditure tends to increase as the economy grows or more quantifiably as the GDP numbers grow. Taxation is the only mechanism that makes sure the revenues of the lawmakers increase proportionately. This growth is indispensable as to maintain the economic growth, the government must spend on infrastructure which acts as a foundation on which economic growth survives.

However, in bad times these taxation policies can help the government in reviving growth and stabilize the faltering economy by tweaking tax structures here and there temporarily. Hence to summarize, the robust taxation not only makes sure that the government revenues are intact and growing at a healthy pace, but it also makes sure that in times of recession, but these can also be used as growth engines.

Well, no second thought that taxation is one of the primary sources for the government to raise revenues, ensuring its expenditure is met. However, one should not underestimate its importance in bringing equality and upliftment of the weaker sections of the society. Without a proper taxation structure, economies may crumble as there will be no capital to improve infrastructure, which can have catastrophic effects on the economy.

This has been a guide to what are Taxation Principles and its definition. Here we discuss the top 3 principles of taxation along with its purpose and importance. You may learn more about financing from the following articles –