A tax wedge can be defined as an underlying difference between pre-tax (gross income) and post-tax (after-tax income) wages and it is used for the purpose of understanding the financial implications of a tax burden that is imposed on a particular product or service and this is the reason why it yields income for the governments but at the same time leverages the level of inefficiencies in a financial market. 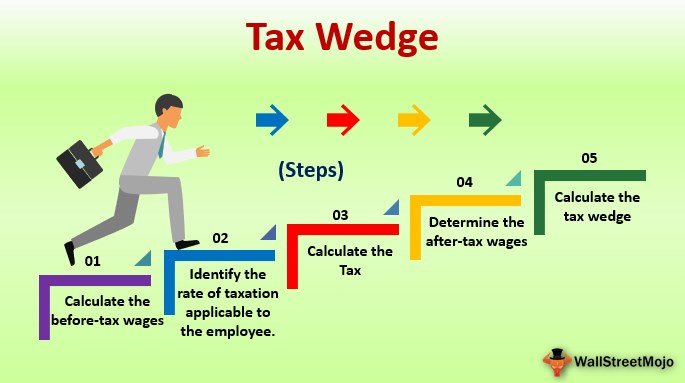 The calculation formula is as follows:

The other formula used for the calculation of tax wedge on labor is as follows:

How to Calculate the Tax Wedge?

Following are the steps that can be used to calculate for an employee earning the wages:

Step #1: Firstly, calculate the before-tax wages which are earned by the employee during the period of time under consideration.

Step #3: Calculate the tax that the employee is required to pay to the state and federal government by multiplying the tax rate with the gross wages. The tax to be paid is the tax wedge, which measures the amount received by the government from taxing its labor force.

Step #4: Determine the after-tax wages of the person by deducting the tax calculated in step 3 from the gross income.

During this sudden hike in taxes, Bill and other employees might not find it convenient to work as an employee and they might start looking for better modes of earning their bread and butter.

The importance is enumerated and discussed as follows-

The tax wedge is merely a difference that remains between gross income and net income once the taxes are deducted. In a progressive tax mechanism, It might increase on a marginal basis with the rise in income. It might also be taken into use for the purpose of calculating the overall percentage of market inefficiencies that are introduced as a result of sales taxes. The inefficiencies caused in the financial market as a result of tax wedge might enable the customer to pay slightly more and the supplier or the manufacturer to receive a lower amount for the goods or services in comparison to the amount that they were usually paying/receiving before the implications of taxes as a result of greater equilibrium prices that are paid by the customers and lower number of equilibrium quantities that are sold by the suppliers or manufacturers.

This article has been a guide to the tax wedge and its definition. Here we discuss formula and example to calculate tax wedge along with its importance. You can learn more about financing from the following articles –