VBA For Next Loop

Excel VBA For Next Loop

“For Next” loop is one of those loops which is used very often than other loops in VBA coding. Loops will help us to repeat the same kind of task for specified cells until the condition is TRUE.

FOR LOOP loops through the range of cells and perform a specific task until the condition is TRUE. For example, if you want to loop through the first 10 cells and insert serial numbers incremented by 1, you can use FOR NEXT loop.

This loop needs a variable to run the loop. Using this variable, we can dynamically reference the cells.

From the starting point loop will start and perform some task after finishing the task its move to the next loop and again perform the same task in the different cell. Like this, until it reaches the endpoint, it keeps performing the specified task. 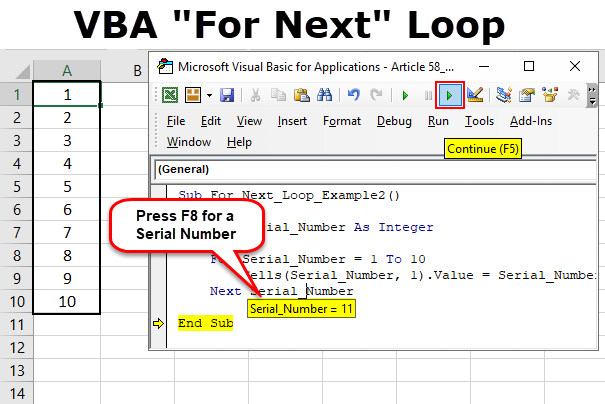 How to use VBA For Next Loop?

Assume you want to insert serial numbers from 1 to 10 to A1 to A10 cells. Of course, we can insert like writing ten lines of code.

But what if I want to insert 100 serial numbers? Of course, I can’t write 100 lines of code just to insert serial numbers. This is where the beauty of the “FOR NEXT” loop comes in to picture. Follow the below steps to minimize the code.

Step 1: First, we need to define a variable. I have declared the variable name called “Serial_Number” as an integer data type.

Step 2: Now I order to apply FOR NEXT loop, our objective is to insert serial numbers from 1 to 10, so this means our loop has to run for ten times. So FOR LOOP statement should be like this.

Step 3: We have applied the loop. Now once the loop is applied, we need to specify what we have to do inside the loop. Our objective here is to insert serial numbers from 1 to 10. So write the code as Cells (Serial_Number, 1).Value = Serial_Number.

Step 4: The reason why we had given Serial_Number in the CELLS property because we cannot specify the hardcore number for row reference here. Every time loop runs, I want to insert the new serial number in the new cell, not in the same cell.

Step 5: Run the code line by line by pressing the F8 key.

At this point in time, the Serial_Number value is zero.

Step 7: Press once more time F8 key, the yellow color will move to the next line of code in VBA. Now place a cursor on the Serial_Number.

One more interesting thing here is wherever the variable Serial_Number is there, that is also equal to 1.

So in the cells property, we have mentioned the code as:

So in row number 1 and column number 1, the value should be 1.

So we got 1 as the value i.e., the value of Serial_Number.

Step 9: Now press the F8 key one more time. Typically next code should be run i.e., the end of the substatement. But here, it will go back to the “above line.”

Step 10: Remember the loop already completed the first run. Now it returns for the second time. Now place a cursor on the variable Serial_Number and see what the value is.

Now variable Serial_Number is equal to 2 because the loop already returned for the second time.

Now, wherever Serial_Number is, there is equal to the value of 2. So the line code:

So, we got the second serial number value.

Step 12: Now press the F8 key. It will again back to the above line to repeat the code. This time Serial_Number value will be 3.

Step 13: So wherever Serial_Number is, there is equal to 3.

Step 14: Press F8 to execute the highlighted line and see the value in the A3 cell.

Step 15: Now keep pressing F8. It will keep inserting the serial numbers. The moment value of the variable Serial_Number is 10 it will stop looping and exit the loop. 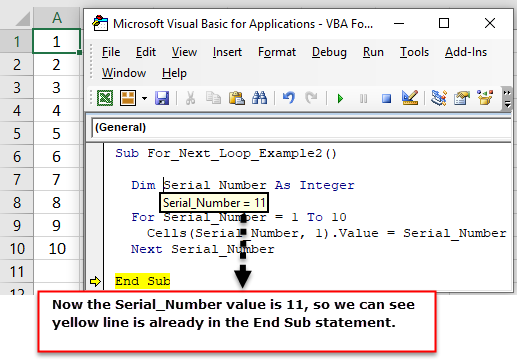 This has been a guide to VBA FOR NEXT loop. Here we discuss how to use VBA For Next Loop with step by step examples and a downloadable excel template. Below are some useful excel articles related to VBA –