VBA SWITCH function allow us to test multiple conditions without nesting any further function but we can apply all the logical functions within the same function itself.

Logical functions are the heart & soul of almost all the calculations. Mastering them will add more value to our skill set CV. When it comes to multiple condition tests, logical formulas are inevitable to arrive at the result. We completely rely on the IF function in excel & VBA. As a starter, the IF condition itself is tough to digest, but when we say nested IF, it is a herculean formula to master. However, to overcome all those nested formulas, we have a formula called SWITCH. 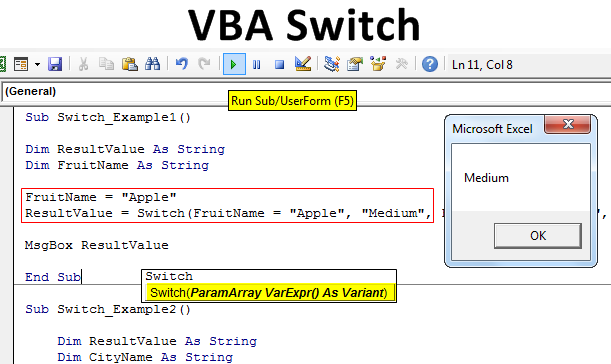 What if none of the expression is true and all are returned as false? In such a situation, we get run time error unless we have a pre-emptive error handling for such situations.

How to use the Switch Function in VBA?

Now, look at the below code.

After that, we have written.

This is the final part of the formula. If the variable FruitName is Watermelon, then the result should be “Cold.”

When I run this code, it will return the result as “Medium” because for the variable “FruitName,” I have assigned the value as “Apple.” 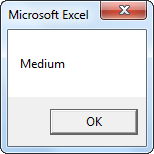 Since Fruit Name is “Apple,” our logical test result is “Medium,” so accordingly, we have a result in the message box.

Assign the different values to the variable “FruitName” to get the respective result.

Take a look at one more example.

This time I have assigned city names, whatever the city name we supply to the variable “CityName,” accordingly, I applied some results to the respective city names.

Now in the above example, I have mentioned the city name as “Delhi,” so our result will be “Metro” in the message box in VBA.

This is how the SWITCH function works in VBA.

This has been a guide to VBA Switch. Here we discuss what does switch function does in VBA along with examples and a downloadable excel template. You can learn more from the following articles –