Asset Accounts are used to identify the exact usage of stakeholder’s capital (Debt + Equity). They are reported at book values and are depreciated/amortized in the case of fixed assets and provisioned/expensed for in the case of current assets in the P&L.

Changes in asset values on the books of a company have to reflect in either the Profit and Loss Statement or the Cash Flow Statement.

An example would be if accounts receivable increased on the books, it meant an outflow of cash on the Cash Flow Statement. Similarly, if inventories decreased in the books, it means an inflow of cash due to products getting sold. A decrease in the gross block is expensed on the P&L through depreciation, and an increase in the gross block is reflected by Capex capital expenditures under the Cash Flow Statement. 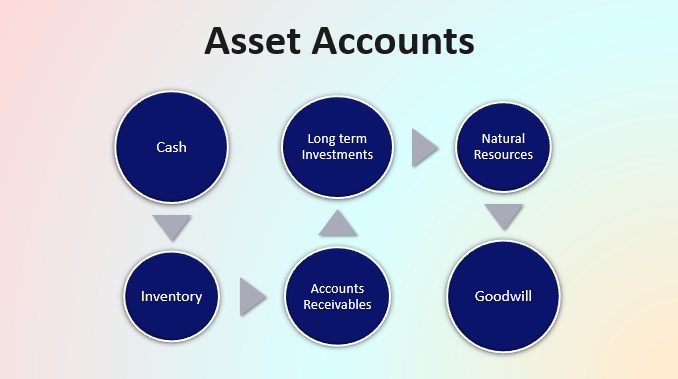 What do Asset Accounts tell us?

Once you are through with understanding how changes in asset reflect on the Financial Statements, it is important to understand how investors look at asset accounts of individual companies and match it with the industry to identify operating trends. We can compare companies operating across different industries and compare how many $ of revenue a tech company generates for every $ of capital invested vs. a manufacturing company.

We can also compare companies operating in the same industry as Walmart, Target, and Costco to determine which of them are converting products to cash the fastest and most efficiently. Investors can also identify trends across the entire industry. E.g., An agrochemical company’s receivables could be continuously increasing due to the declining profitability of farmers. Such a trend would be visible across the Balance Sheet of the entire spectrum of agrochemical companies, and it helps an investor identify that the industry is going through stress.

How to analyze Fixed Asset?

What are the Current Assets?

Assets Accounts belong to the stakeholders, who are the debt and equity investors in the company. It is the responsibility of an investor to look at the assets reported by the company and understand its way of conducting business and if it will maximize value to shareholders in the future. Many companies are analyzed based on the assets they have on the books. The most common example is banks, as the intrinsic value of the bank is the interest it can generate from giving loans. Hence all these loans are assets for a bank, and the value of the bank is determined by its Price to Book ratio relative to other banks. The book in this context is the book value of equity, which is the book value of assets – book value of

This article has been a guide to the Asset Accounts definition and its meaning. Here we discuss the list of Asset Accounts and its types – Fixed Assets Account and current Assets accounts, along with practical examples. You can learn more about accounting with the following articles –