What is Commodity Market?

The commodity market is a physical or a virtual market place where market participants meet and buy or sell positions on commodity products like oil, gold, copper, silver, wheat, barley. Though started with Agri commodities initially, commodity markets today trade in all types of commodities like base metals – gold, silver, copper, infrastructure like oil, electricity, and even weather forecasts. There are about 50 major commodity exchanges worldwide which trade in more than 100 commodities.

The commodity market can be categorized under two major categories based on the type of commodity. These two categories are: 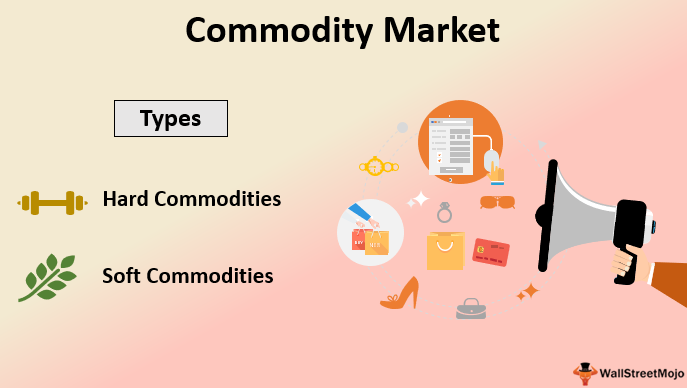 Hard commodities consist of the commodities that are required by the manufacturing industries. These should be mined and are manually extracted from the land or the ocean. They have limited reserves and are affected the most by the geopolitical and economic conditions. Possible examples of such types of commodities are Gold, Oil, silver, rubber, copper, etc. The major part of the pricing is because of the process that is carried out to extract them.

Soft commodities constitute the commodities that are mainly Agri related or livestock. Unlike hard commodities, they are not mined or extracted but are produced through proper procedures. They have virtually unlimited reserves and are not affected by geopolitical conditions but by the weather or by natural occurrences. Possible examples of such commodities are corn, wheat, barley, sugar, pork, coffee, tea, etc.

Example of How Commodity Market Works

If the price of a traded commodity fluctuates, the price of the corresponding future contracts changes in sync. Consider the case of crude oil whose prices are decided ideally by demand and supply. Middle East countries, which are the major oil-producing nations, tried to control the prices of crude oil by controlling the supply. However, in a practical world, oil prices are affected by other factors, too- geopolitical consideration being the major one.

For example, in the 2008 economic crisis, the global growth was down, and hence the prices of oil futures should have crashed big time. However, that was hardly the case, and oil futures were at a lifetime high of $ 145 per barrel. This was mainly because the investors across the world were taking out their money from equity and buying commodities and futures contracts. This flow of increased money led to a surge in the oil and gold futures.

Advantages of Investing in a Commodity Market

Commodities trading and hence commodity market can be traced to the times when human civilizations started to evolve. They are just another class of assets, just like equity or bonds. The difference lies in the origins as they are more tangible. The similarity lies in the fact that both have their complexed, evolved derivatives which act as hedging mechanisms for hedgers and quick money for speculators. The commodity market provides a medium for these different participants to come together and play a role in the eventual pricing of these commodities.

This has been a guide to What is the Commodity Market and its Meaning. Here we discuss how commodity markets work along with its types, an example, advantages, and disadvantages. You can learn more about excel modeling from the following articles –