What is Cumulative Voting?

Cumulative voting which is also known as accumulation voting or weighted voting, is the process used for electing the directors of the company by the shareholders. In this procedure, each shareholder can cast the number of shares they hold multiplied by the number of directors to be elected.

This type of voting system helps in protecting the minority shareholders‘ interest in the company. Under this system, each shareholder can allocate all of its applicable votes to a single candidate to have more chances to get that candidate elected. 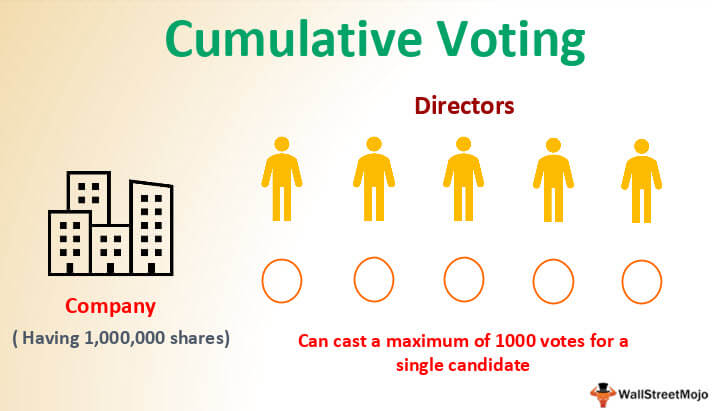 In the cumulative voting system, shareholders can focus on trying to elect one of his candidates out of the group of total seats available. For example, if a shareholder is having 500 shares of a company and there are four directors to be elected, then the shareholder can cast 500 multiply by four, which means 2000 votes in favor of a single candidate. The shareholder can also cast 1000 votes each to 2 candidates or divide his 2000 votes in whatever way in between 4 candidates. This will strengthen the chance of winning of that candidate. Thus with this voting system, minority shareholders can also have their impact on the board.

Suppose a company is having 1,000,000 shares in total. An investor named A  is having 1000 shares out of 1,000,000 total shares. The company needs to choose five directors. In straight voting, A can only cast a maximum of 1000 votes for a single candidate. But in cumulative voting, he can divide his shares in whichever way amongst the candidates. If he wants to elect a single candidate, then he can vote 1000 multiply by five, which means 5000 votes for a single candidate, and suddenly the chances of getting that candidate gets increased.  If the shareholder likes two candidates, then he can divide his 5000 votes amongst these two candidates also.

While choosing the directors, companies can employ two types of voting: either straight voting or cumulative voting.

If there are four candidates that need to be chosen and a shareholder has 100 shares, then,

Cumulative voting can be used by the organization to protect the interest of minority shareholders while choosing the directors. Minorities get more election power with this method. If they choose this voting system wisely, then there are good chances that their preferred candidate gets to be chosen on the board.

This has been a guide to What is Cumulative Voting & its Definition. Here we discuss its examples, how it works along with effects, advantages, and disadvantages. You can learn more about from the following articles –