What is Staggered Board?

Staggered Board, popularly known as Classified Board, refers to the particular set-up of the members of the board such that it contains directors that are stratified into different classes. In such a case, out of the several classes of directors, only one class of directors have to go through the process of elections at any given point of time, which is quite different than that of a normal board where all the directors are elected at the same time.

How Does the Staggered Board Work? 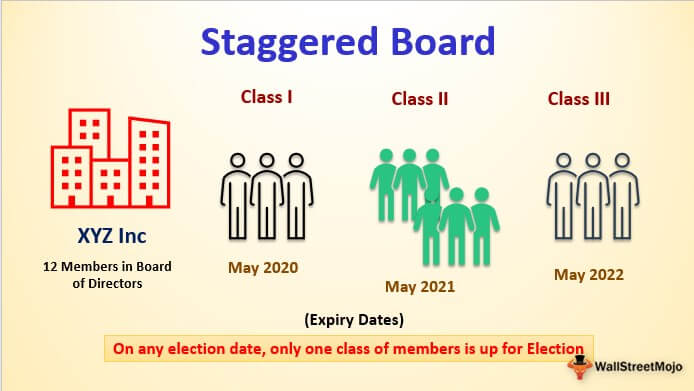 Now, let us assume a situation of a potential hostile takeover of both XYZ Inc. and ABC Inc. by DFG Inc. in June 2021. Basically, DFG Inc. seeks to acquire either of the two companies to strengthen its market domination by having more market share. However, none of the companies are willing to join DFG Inc.

The takeOver of XYZ Inc: In order to gain control of XYZ Inc., DFG Inc. will have to garner a board majority. Given the staggered nature of the board, the acquirer will be able to pocket a maximum of 5 seats in any election. So, in the election of June 2021, even if DFG Inc. acquires all the five seats, it will still fail to achieve a board majority (5 out of 15). Therefore, the acquirer will have to wait until the next election to achieve a board majority, and in the period, the target company might be able to device some other way to overcome the takeover attempt.

The takeOver of ABC Inc: In order to gain control of ABC Inc., DFG Inc. will have to garner a board majority. Given the normal nature of the board, DFG Inc. will be able to acquire all the 15 seats in the election of June 2021 and swiftly take over ABC Inc.

The above example shows how such a classified board can be useful to avoid such attempts of a hostile takeover.

Why is the Staggered Board Important?

The importance can be acknowledged from the fact that it can be used as an effective measure to stop a hostile takeover, as has been illustrated in the above example. Because of a staggered board, a hostile bidder has to delay its attempt at least by one year of not more. In order to gain control of the majority section of the board, the hostile bidder has to acquire the required seats across several elections that are planned to happen for a specific director class. In this way, it safeguards a corporation from outside influence.

Some of the major benefits are as follows:

Some of the major limitations are as follows:

This has been a guide to what is Staggered Board. Here we discuss how does it work along with examples, benefits, and limitations. You may learn more about financing from the following articles –